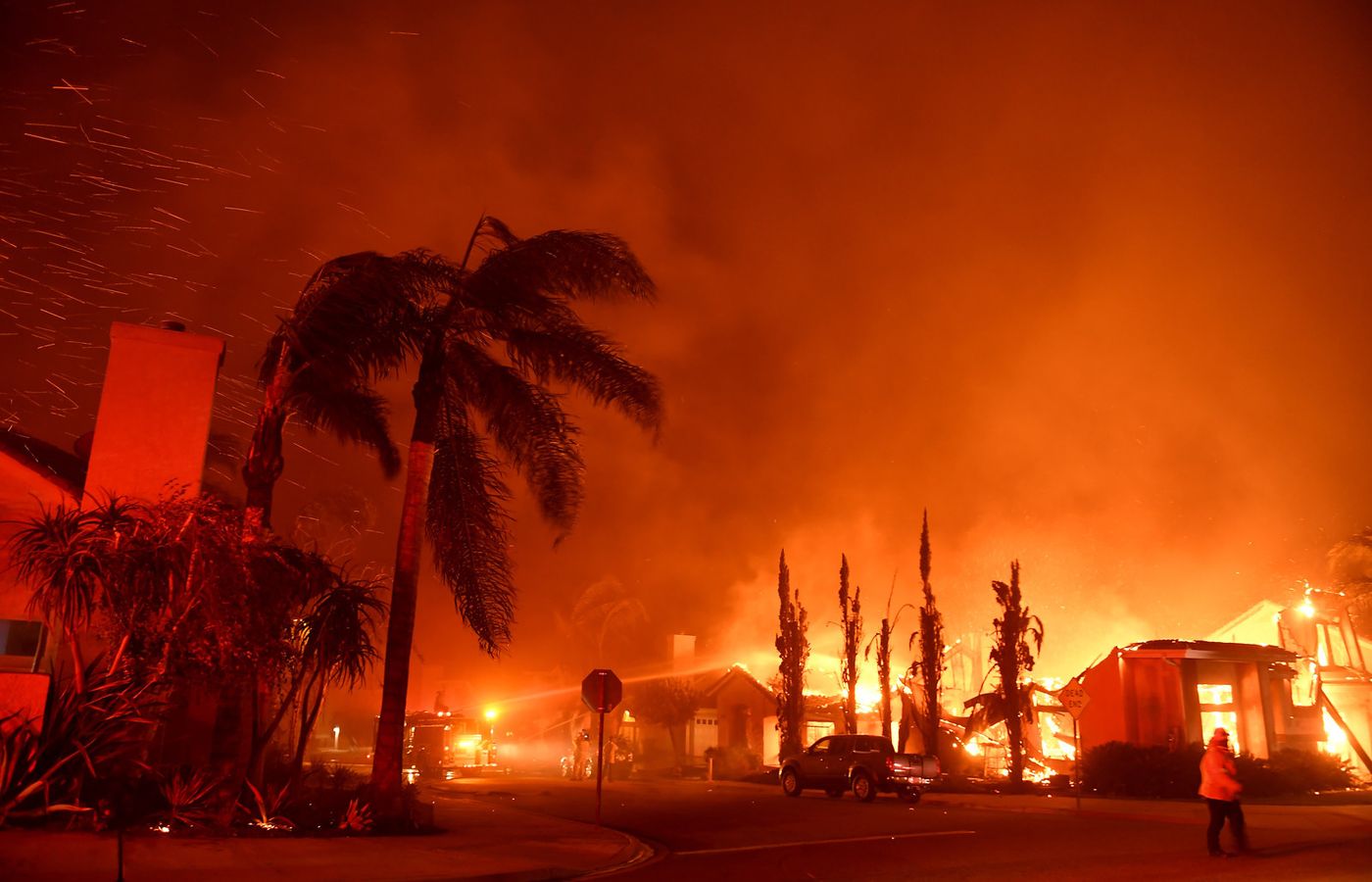 A video posted earlier this year on YouTube shows a woman from StopTheCrime.net speaking at a Sonoma County Board of Supervisors meeting. Almost immediately, she stated the following:

“One of the reasons why I was not here for two and half years… I used to be a regular attendee here… but Pacific Gas and Electric was intercepted with a download of documents professing the fact that they were going to be using directed energy weapons, satellite based, on Sonoma County. That has been up on YouTube with the plan to burn up Northern California.”

“We discovered that Pacific Gas and Electric is operated by and large by Rothschild. Rothschild owns Weather Central and also has a large hand in weather modification, globally. And it’s so sad to be here today because I have family members that lost homes and I live in a county that I call home… that is being literally overrun by a power that has not yet been discussed.”

“And I’m horrified and sad to be here right now. Very sad. But the plan to burn up Northern California was real. It was your first early warning. And there were emails that were sent to other government officials… (they) knew about this. And I would ask you please to watch the YouTube (video). Listen to it, because the second plan of burning up Northern California hasn’t yet happened. But it will. It will happen.”

Watch the video below:

Interestingly enough, an anonymous image board user also mentioned PG&E, along with some other details, in a couple of their posts:

“The Camp Fire was a pre-planned event! I saw activity in the community of Paradise that gave me the sinking feeling that something was going to occur. I even told my daughter the week previous that something was going to happen. Capstone company needs to be completely investigated. I was told they were contracted by PG&E and working in the area for a couple of weeks previous to the event. I saw strange things during the fire being done by this company. Certain houses surrounded by fire trucks as up the street people burned alive in their cars. On top of that the town of Paradise turned the water off which prevented firemen from doing their jobs. The 3rd day Cal Fire called and demanded the water be turned back on. Many years ago we discovered that approx 75% of the hydrants in our town are blank. They are not connected to any water source at all. I lost everything I own to this fire. Most of the town did. Many people lost their lives trying to escape. I have lived in this town since 84 and have seen some of the worst fire seasons on record. This was not a regular fire. The wind was NOT blowing like they claim except in the vicinity of the fire itself. There are roads with every house burnt to the ground but garbage cans standing perfectly untouched in the street between the burnt houses. In the weeks before many of the retirement and convalescent homes had evacuation drills and made sure that each person had a bag packed with 3 days worth of clothes and meds which stayed packed and ready after the drill. There is so much more to share, but there is no one here trustworthy to talk to.” 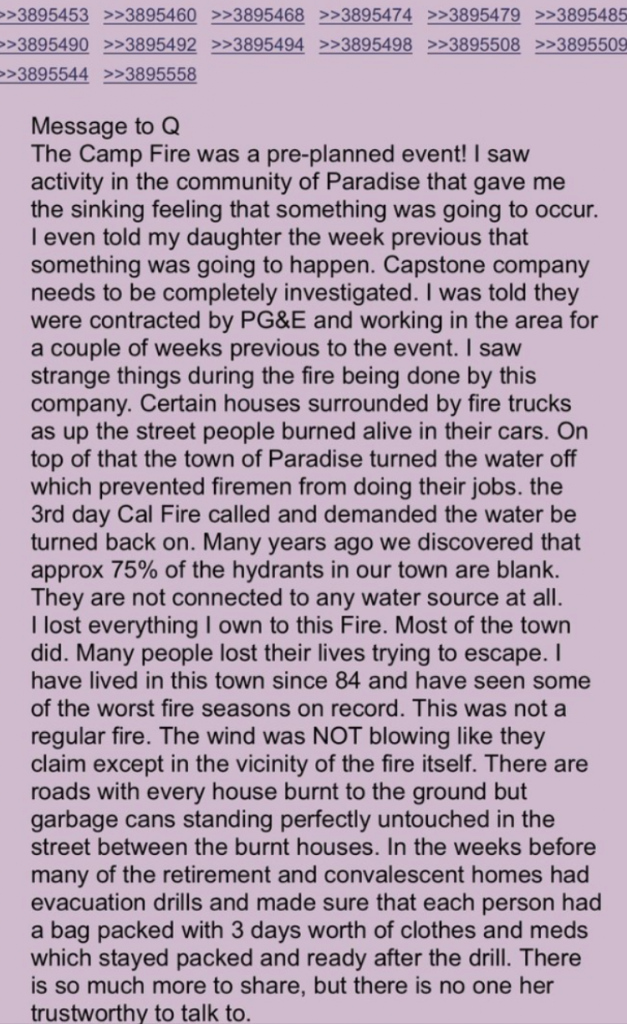 “My thoughts on why… All of the California communities burned this year are for the most part Republicans. Between Camp fire and the Carr fire there are now 1000s of displaced voters. And the gold… The town of Paradise is literally on a mountain of un-mined gold. People have avoided selling property for generations to pass it down to family and not have the town destroyed. I would bet the last dollar in my pocket that there will be a few contractors come through to purchase as much property as possible at this point. I need help and I am absolutely willing to doxx myself to the f**king world. I drove through fire to save my grandchildren’s lives and I will go to whatever length I have to find the answer to who and why they did this to my community.” 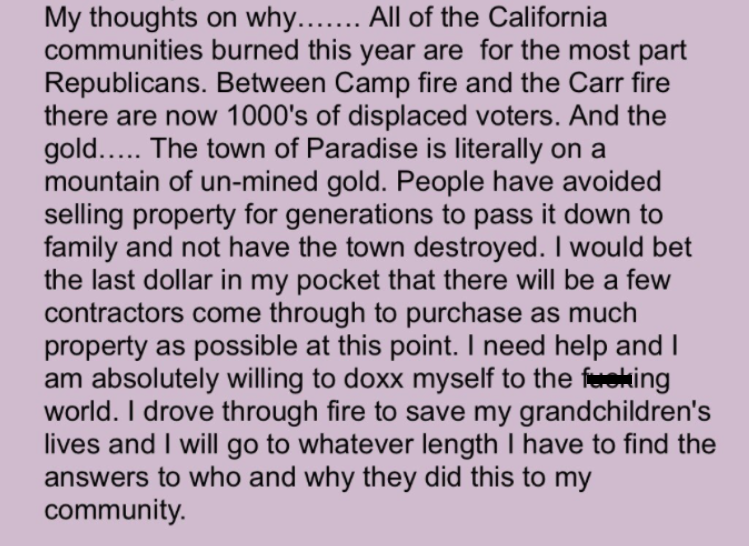