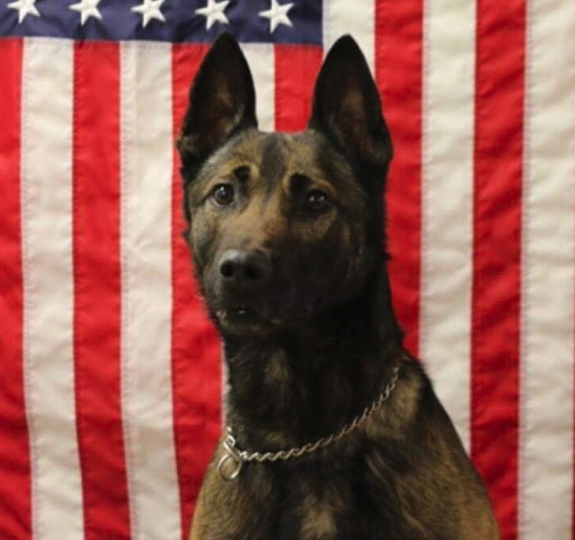 A dog assigned to the 75th Ranger Regiment in southwestern Afghanistan was killed after he saved his handler’s life during a close-quarters battle that also led to the death of an Army Ranger, according to a report.

Maiko, a 7-year-old multipurpose canine assigned to the 2nd Battalion, “was killed in action while leading Rangers into the breach of a targeted compound,” an unofficial biography leaked online and reported by Army Times reads. “Maiko’s presence and actions inside the building directly caused the enemy to engage him, giving away his position and resulting in the assault force eliminating the threat.”

Multi-Purpose Canine (MPC) Maiko was born June 5th 2011 in Holland. He came to America at 15 months old and was selected and purchased by the Regimental Dog Program (RDP) from Shallow Creek Kennel in October of 2012. Maiko completed the Regimental Basic/Advanced Handler’s Course in January of 2013 with SFC Jonathan Dickson where he was foundationally trained on patrol, apprehension functions, explosive detection, and tracking. Upon completion of the Handler’s course, Maiko was assigned to 2nd Ranger Battalion.

Maiko performed successfully during his first training cycle and was deployed to Kandahar, Afghanistan with SFC Dickson. During Maiko’s career with 2/75, he deployed a total of six times to Afghanistan, conducting over 50 Ranger-led direct-action raids. Maiko has consistently proven himself exceptional in a number of K-9 employment ranging from IED detection, building clearance, apprehension of combatants, and EKIA clearance. Maiko has additionally taken part in over eight Mission Readiness Exercises (MRX’s), 50 full-mission profiles, eight validation exercises, and ten TDY training exercises.

At Maiko’s time of death, he was the most senior MPC assigned to 2/75 with the most training and combat experience. Over the course of his six deployments, he was handled by five different Rangers. Maiko was best known for his easy-going temperament, his rock solid consistency in training, deployments, and his forgiving nature, when his revolving door of new handlers made mistakes. He has had an everlasting impact on every man who worked with him. At times it would be painful bumps and bruises, from receiving his punishing bites during training. Most often it was a softened heart after getting to experience Maiko’s calm and joyful disposition.

Along with SGT Jasso, MPC Maiko was killed in action on 24 November 2018 in Afghanistan. His actions saved the life of his handler and other Rangers. Thank you for your service and sacrifice! pic.twitter.com/gVquyLsHFe