Journalists were kept away from a secret federal appeals court hearing on Friday in Washington, D.C., as officials sealed off an entire floor for over an hour during arguments in a mysterious grand jury case which some believe could be related to the Special Counsel investigation into Russian interference in the 2016 elections.

The case – known officially as “In re: Grand Jury Subpoena” – has been sealed in its entirety when it comes to public records, as it moved from the district court to the appeals court level in recent months.

Reporters at the courthouse – which is just down the hill from the U.S. Capitol – at first tried to gather outside the courtroom where the secret arguments were going to take place, but then security officials sealed off the entire fifth floor of the building, making it nearly impossible to find out who was involved in the matter.

“We have spread out across the building,” tweeted Darren Samuelsohn, a reporter for Politico. “No sightings yet to report of note.”

Reporters kicked off the 5th floor entirely for a sealed appeals hearing that may involve #Mueller on s grand jury dispute. They are even searching stairwells for reporters. We have split up and trying to cover all entrances and exits….

Arguments in the sealed Mueller case are ongoing. Everyone was booted out of the Court of Appeals and the entire floor was cleared.

The DC Circuit is about to hear arguments in the sealed grand jury matter. They've sealed not only the courtroom, but the whole floor, so we've been moved away. Haven't recognized anyone going in earlier as being connected to Mueller's office, now we won't be able to see

The possible tie to the Mueller investigation was reported by Politico earlier this year, when one of their reporters observed someone asking for a secret court filing to take to a law firm involved in the matter.

There are two different sealed cases involving an unknown grand jury which have attracted attention at the D.C. Circuit Court of Appeals – as the relatively speedy nature of the cases – and then today’s sealing off of an entire floor – has prompted intense interest.

“To this day, I can’t fathom what the heck it could be that would move this fast and get this much secrecy,” said national security lawyer Bradley Moss.

Several media folks have asked me and colleagues for weeks what we can imagine this case being, assuming Trump's people are telling the truth and it's not them.

To this day, I can't fathom what the heck it could be that would move this fast and get this much secrecy. https://t.co/EH6X08KDq8

Here’s the docket on the case – as you can see, it offers little in the way of information. 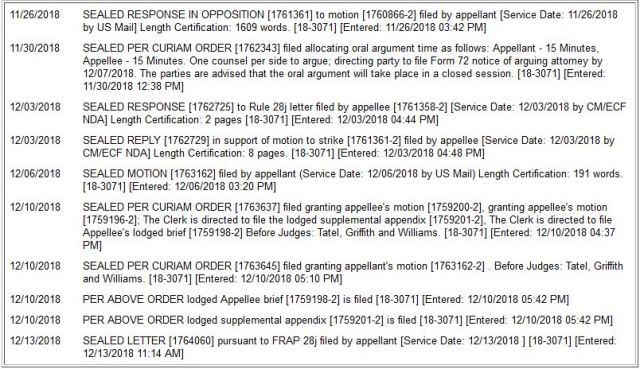 But with officials sealing off the entire courthouse floor to deal with it – the case certainly raises questions about what’s going on.

And reporters were not able to figure it out on Friday.

The mystery grand jury appeals case (Is it#Mueller?) has ended. Despite the best efforts of at least 14 reporters from all the major news outlets, no one spotted a soul. The mystery therefore continues …..