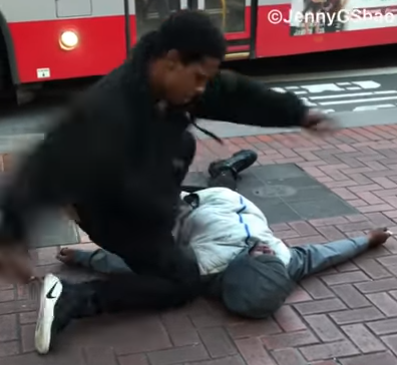 On Friday evening, a fight ensued between two men outside a Carl’s Jr. in San Francisco, CA near Powell Street Station.

According to the restaurant’s private security, the two were arguing over the rights to a Bluetooth speaker they stole from someone or somewhere. It quickly escalated into a brawl.

In the following clip, a doctor working nearby and patrons from the restaurant were the first to provide medial aid. They aided the victim after the first set of bystanders were unsuccessful with their pleas for mercy and physical intervention. SFPD and paramedics eventually arrived after others called 911.

Both videos were shared with SFPD.