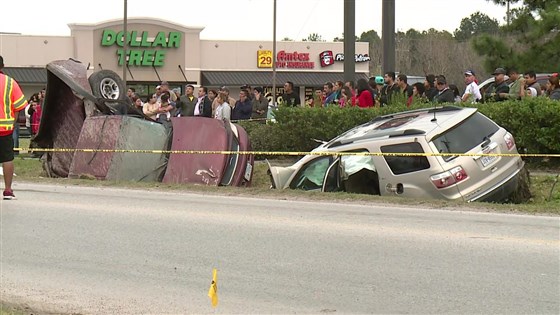 A 14-year-old boy was arrested and faces a murder charge in Houston after an alleged egg-throwing prank sparked a chase that ended in the death of a motorist, authorities said Wednesday.

The incident began with the suspect —allegedly behind the wheel of a GMC Acadia SUV, with two other juvenile passengers inside — throwing eggs at passing cars on Tuesday afternoon, authorities said.

A driver in one of the egged cars allegedly flashed a semi-automatic handgun at the boys and chased them, officials said.

Update on Aldine Mail Rt. Fatality: the 14 yo driver has been charged w murder & booked in the county juvenile detention center. He sustained a broken ankle in the crash. The driver of the vehicle that was chasing him has been identified & efforts are being made to interview him.

The victim was identified Wednesday as Silvia Zavala, 45. She “was found with no signs of life at the scene by paramedics,” deputies said.

The 14-year-old driver suffered a broken ankle and has been booked into a juvenile detention center, according to the sheriff.