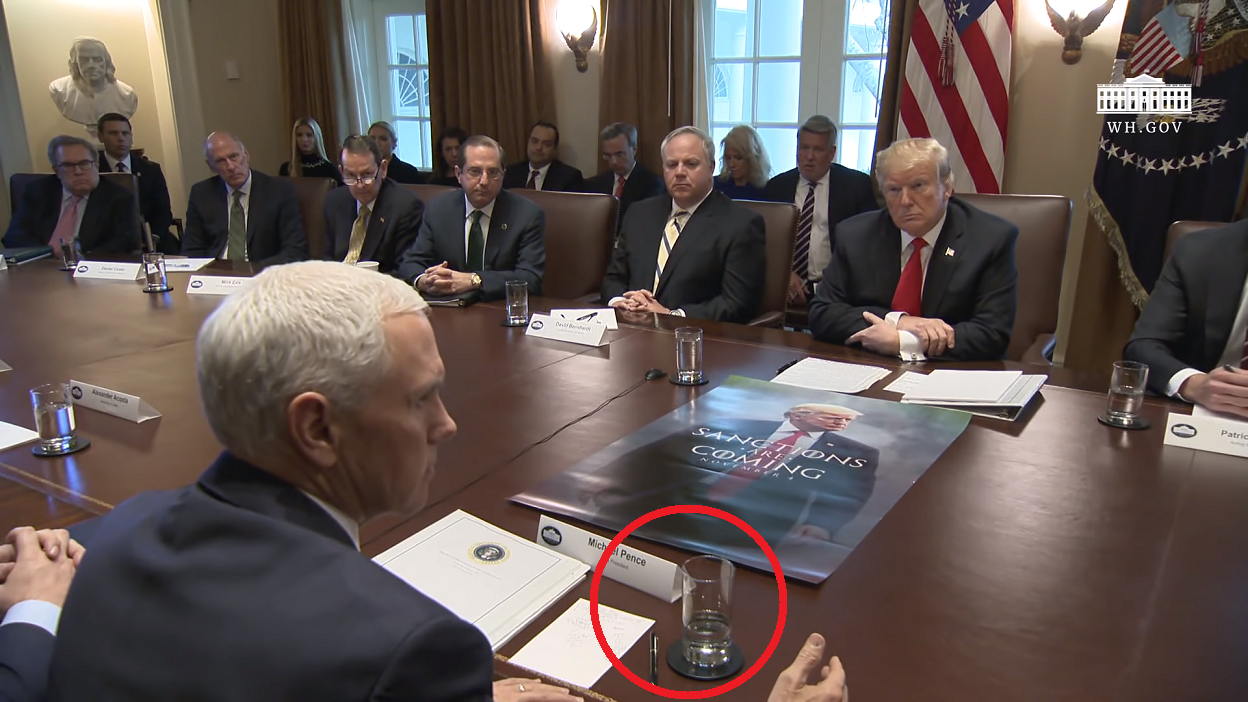 President Donald Trump recently led a meeting with his cabinet in the White House to discuss a number of different topics. Many key players from his administration were in attendance, including Vice President Mike Pence.

Some who have followed the QAnon phenomenon noticed a few interesting things that were present on the conference room table and have connected them to a number of messages from Q: 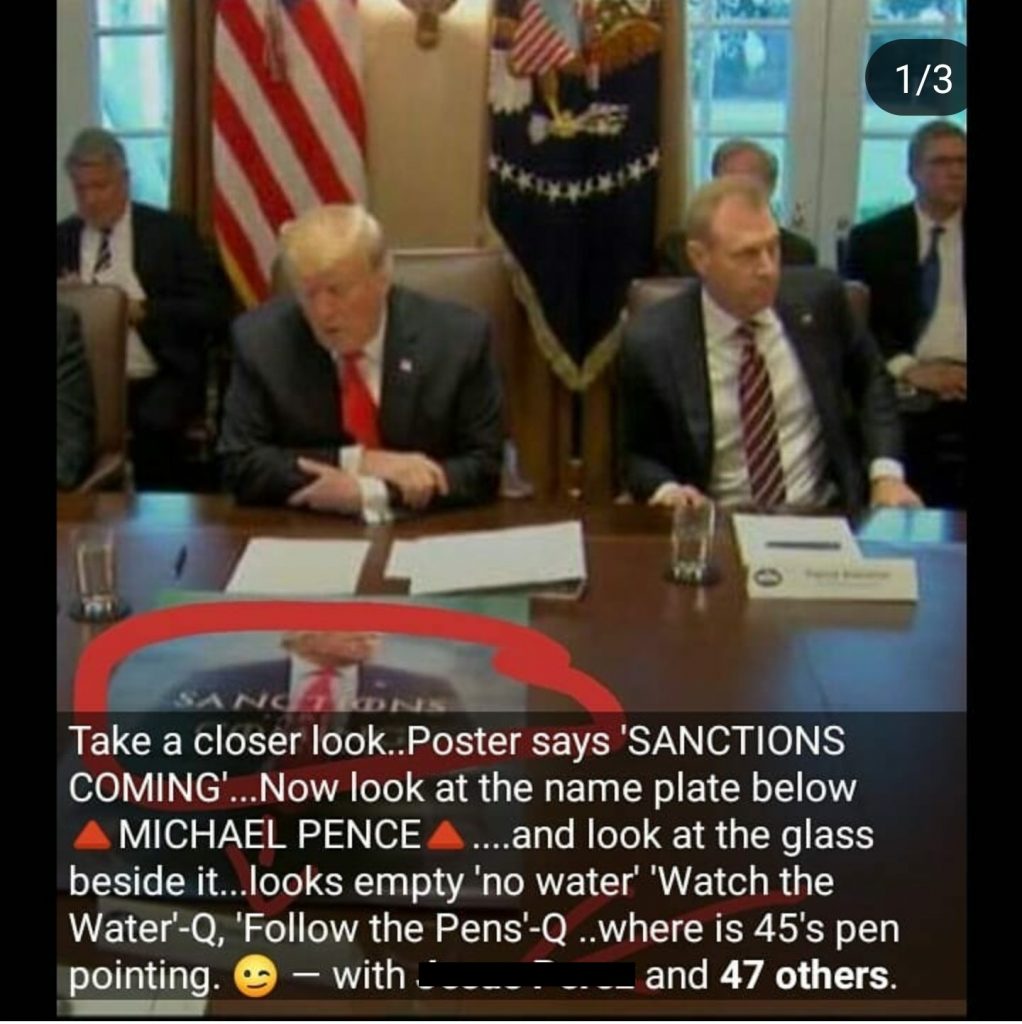 Larger photo taken at a different angle/point-in-time (click to enlarge): 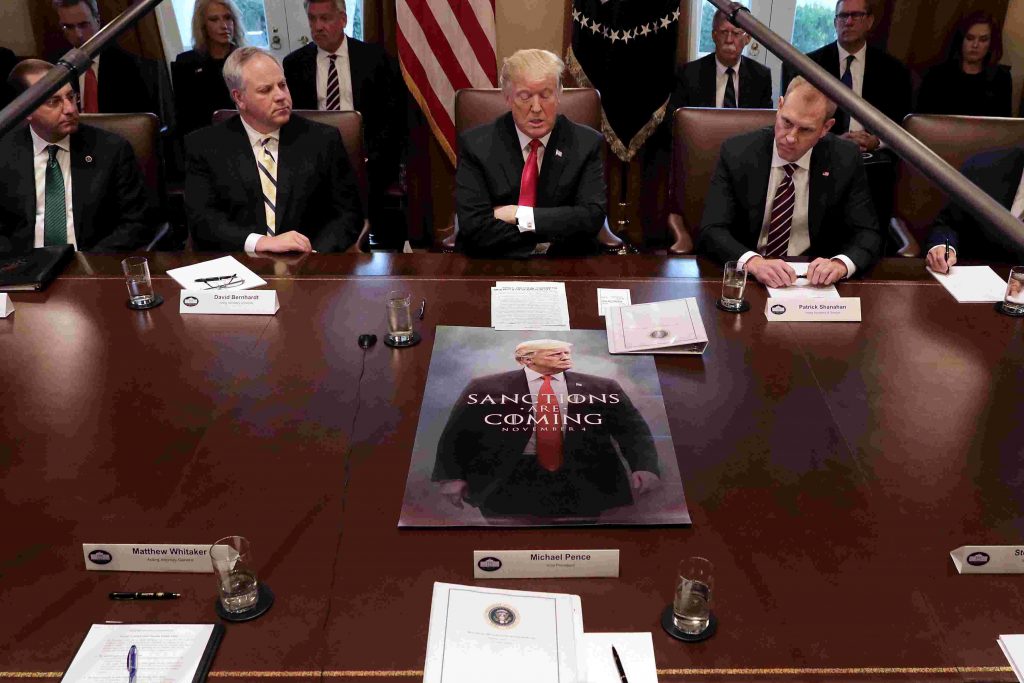 We’re not sure why this particular poster was displayed shortly after New Years, and what exactly it has to do with QAnon.

Perhaps it’s a warning to other countries/foreign adversaries to either comply with U.S. demands or face our economic wrath? Just yesterday, North Korea began acting uppity again and warned America to stop “meddling” in its affairs with South Korea.

Or maybe it was directed, in a weird way, towards uncooperative Democrats? As we all know, we’re in the middle of a partial government shutdown and Trump is holding his ground when it comes to building the southern border wall.

The name tag and water glass(es)

It’s common practice to provide water to members of any meeting, especially if it’s going to be a lengthy one.

QAnon has mentioned multiple times throughout the past year or so to “watch the water.”

We’ve dug up a few instances below:

1. Q keeps saying "Watch the water". What if @POTUS told us what that means?

If you scroll back up and look at the first image we posted, part of the caption states:

Maybe Pence was just thirsty? We’re not really sure what to make of this one either.

One theory says instead of focusing on Pence, look at Trump and the positioning of his water:

There is an insider who knows exactly, a few days before, how Trump is going to position a glass of water.

The purpose? Probably for QAnon to prove he’s not just a troll and actually has deep, insider knowledge.

This might be the most interesting part of the meeting.

Here’s just one of the posts from Q which says to “follow the pen”: 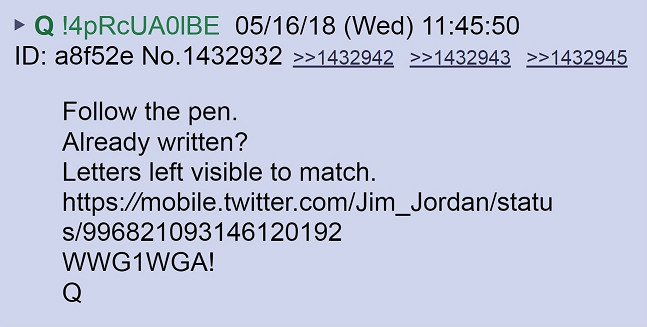 We’ve gone ahead and circled each pen that can be seen in the image we previously posted: 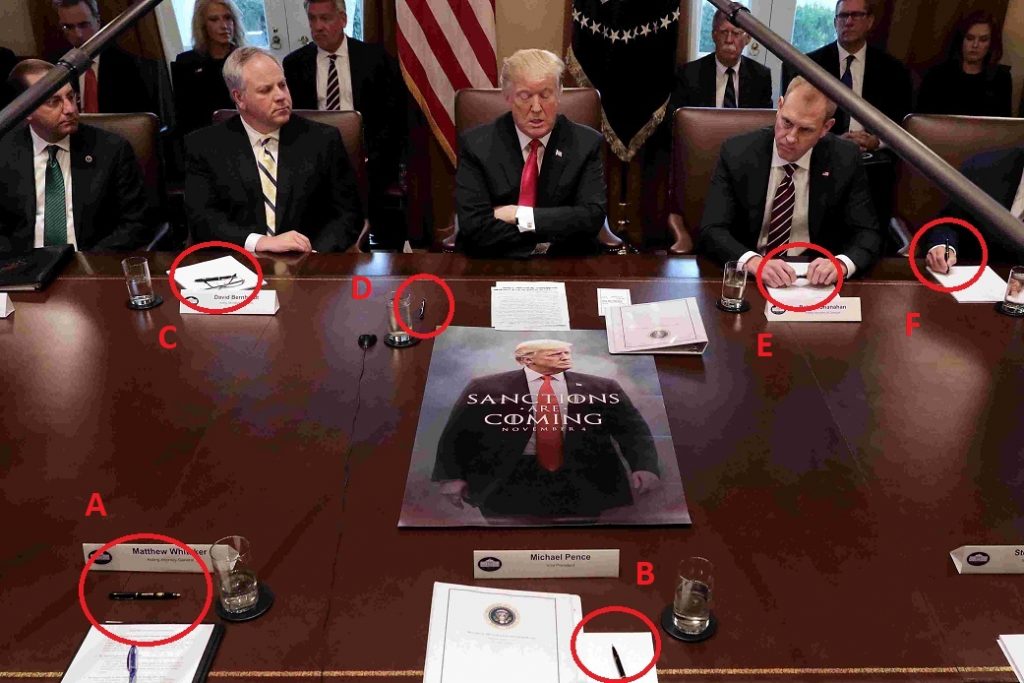 So, if you look closely:

A & B are pointing towards Pence’s name tag.

C is pointing away from Trump.

D is pointing towards Trump.

E is pointing either away or towards Trump.

F is being used to write on a notepad.

Again, what does it all mean? Who knows, but it’s looking like Pence is winning the pen theory race with a total of two pointing towards his name tag.

While this might not be definitive proof Mike Pence is QAnon, it’s still kind of interesting.

Here’s something else you may have missed: some think QAnon’s tripcode has been compromised:

Q is a fraud
Proof he was compromised and probably hijacked prior to leaving 4ch
Using an open source password cracker (hashcat), publicly available information, and a little guess work about Q’s favored key space, a user can successfully recover all of the passwords that correspond to Q tripcodes. These are posted below in chronological order of use:

Note that Q seems to be unaware that the algorithm only takes the first 8 characters of the password and ignores the rest. In the past, Q has claimed to have baked meaning and foreknowledge of future events into these passwords, in particular, the 4pRcUA0lBE:NowC@mes tripcode-password pair. If I understand correctly, Q claims that the full password was “NowC@mesTHEP@in—23,” with 23 signifying the date of an important event, but anything beginning with “NowC@mes” would yield the same tripcode signature. This weakness severely undercuts any claimed predictive power and indicates a possible intent to mislead. For example, all of the following passwords should yield the same tripcode, 4pRcUA0lBE:

These can all be tested at at minichan’s tripcode test page. [link omitted]