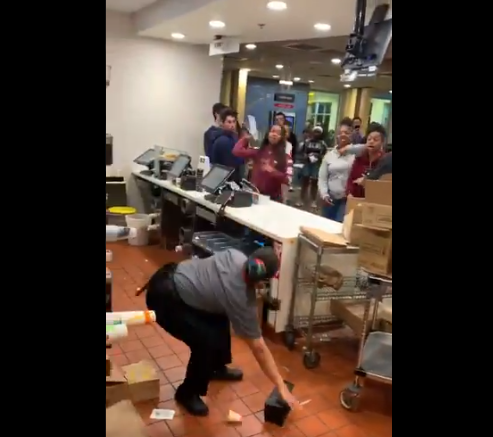 A group of rowdy teenagers went berserk in a Southern California McDonald’s after a mother of two small children confronted the older girls and asked them to leave the play area.

The teens became irrate and began throwing cups of water and and ice at the mother after she refused to fight them.

They eventually made their way into the main dining area where they confronted other customers and restaurant employees.

In a video shared on social media by employee Dexter Forbes Jr., the group is seen arguing with two male customers while the McDonald’s employees watch from behind the counter. That’s when the group starts throwing big items at the workers.

Employees and customers alike called the police, but the girls fled the scene before they arrived.

The group caused approximately $1,000 worth of property damage.

In a statement released by the McDonald’s franchise owner, Thomas Mangione said he is fully cooperating with local law enforcement:

“The safety and security of our guests and their families are a top priority. We have been in contact with the local law enforcement and are fully cooperating with their investigation.”

Forbes Jr., the employee who recorded the event, later reported he was suspended for posting the videos on social media:

Update: They Suspended Me For Posting These.. I Was Just Trying To Do My Daily Duties As A McDonalds Employee and Spread Awareness Of How Us As Employees Are Treated😪 Now I Have NEW YEARS Off😭 OH NOOOOOOOOOO💀