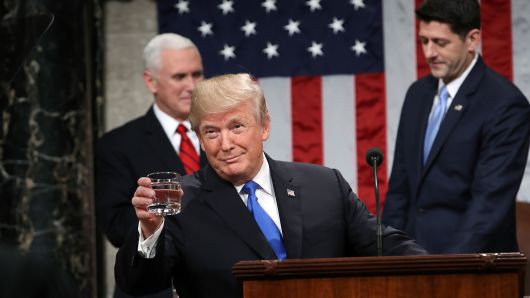 Trump Considers Delivering State Of The Union Address To U.S. Senate Instead Of House

Earlier today, Senator Rand Paul (R-KY) took to Twitter and invited President Donald Trump to deliver the State of the Union Address to the U.S. Senate:

Senator McConnell is in charge of the Senate. If Mrs. Pelosi refuses to allow the president to deliver the State of the Union in the House, I propose we move it to the Senate and make it happen!

Paul also joined Fox and Friends to discuss the possibility of Senate Leader Mitch McConnell inviting the president to give his annual SOTU address to the Senate since Speaker Nancy Pelosi (D-CA) has “postponed” the speech due to the ongoing partial government shutdown:

CBS News reports the White House is currently considering its options when it comes to the upcoming speech, which is scheduled for January 29, 2019:

Top White House officials are discussing whether the GOP-controlled Senate could invite President Trump to deliver the State of the Union address. This, in the wake of House Speaker Nancy Pelosi’s suggestion Wednesday that the address be postponed or relegated to being done in writing due to the partial government shutdown, now in its 27th day.