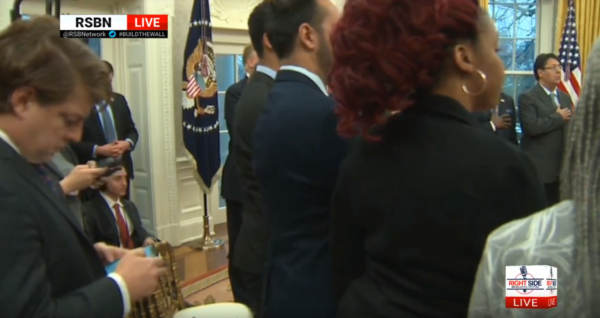 Before President Trump’s major announcement Saturday afternoon concerning the humanitarian crisis at the southern border and ongoing partial government shutdown, he oversaw the swearing-in of five new U.S. citizens in the Oval Office.

The five new legal immigrants are from the United Kingdom, South Korea, Bolivia, Jamaica and Iraq.

Trump said: “By taking this oath, you have forged a sacred bond with this nation,” and welcomed them to America 🇺🇸 pic.twitter.com/g8yMOiM5cf

According to The Gateway Pundit:

During the ceremony the group said the Pledge of Allegiance and the National Anthem was sung.

The liberal media ignored the national anthem and were caught texting on their phones.