EXCLUSIVE: New Videos Emerge Showing What Really Happened Before, During And After The Confrontation Between A MAGA Hat-Wearing Student And Native American Drummer

A new video that was recently uploaded to YouTube and then swiftly deleted showed what the mainstream media does not want you to see about the confrontation between a Native American drummer and a MAGA hat-wearing student.

Luckily, a viewer was able to download and reupload the video before it was removed.

So, who were the real instigators and/or harassers?

It appears ALL of the groups involved, including the African American men (Black Hebrew Israelites), were exhibiting somewhat aggressive behavior, not just one group (the MAGA hat-wearing students) as the media would like you to believe.

UPDATE #1: Another video just surfaced showing what appears to be the Native American drummer (Nathan Phillips) APPROACHING the group of MAGA hat-wearing students.

Did HE actually start the confrontation?

No one said "Build the Wall"
& if anything
That kid deserves a peace medal pic.twitter.com/lPbPtQtTh7

“Covington Catholic student bothering elder man” yet here is evidence of the man approaching them during their school cheer not disturbing anyone. Doesn’t make sense pic.twitter.com/SRYRJOIoKf

UPDATE #3: Here’s another view from the African American group that shows Phillips approaching the students:

UPDATE #4: Raw video of the whole event (confrontation between Phillips and the students starts at around 1:12:00 / Warning: vulgar language) –

UPDATE #5: It seems like this isn’t the first time Phillips has confronted students he’s disagreed with:

UPDATE #6: A friend of the Covington Catholic High School student at the center of this controversy sent a letter to Cincinnati-based station WKRC-TV begging them to report the truth about what occurred on Friday in Washington, D.C.:

Response from Cov Cath student who says he was present at the event in question in Washington.@Local12 pic.twitter.com/nqLD1pJY2u 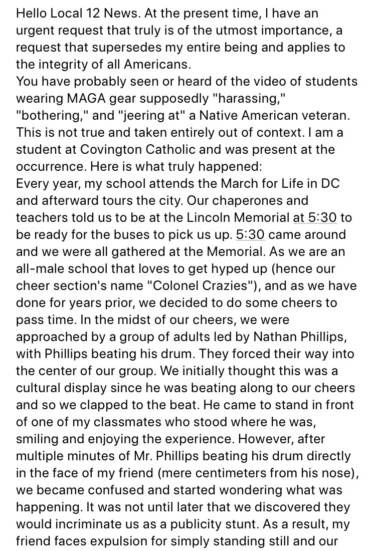 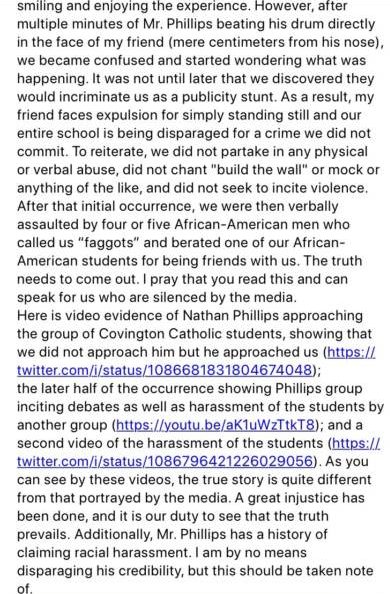 Read more at The Gateway Pundit

I’d like to invite You to the Polish Parliament

After watching this video, I Am now standing up for these wrongfully accused young men and all of You!

You are very welcome to come and speak out what You believe in!
🇵🇱🇺🇸🤝#StandWithCovington

UPDATE #9: Phillips may also have ties to the United Nations and possibly even George Soros.

From a May, 2018 article published on rainforestparternship.org:

On March 26th, 2018, RP joined the live webcast briefing on the Interfaith Rainforest Initiative: A New Alliance to protect Rainforests and Their Guardians in New York. This briefing was apart of The 17th Session of the United Nations Permanent Forum on Indigenous Issues (UNPFII).

There were a variety of participants from all over the world including Brazil, Colombia, Indonesia, Peru and the Democratic Republic of the Congo.

The UN Permanent Forum on Indigenous Issues (UNPFII), the organizations working on behalf of the indigenous communities, and the groups of indigenous people have conducted conference and initiative for the rights of indigenous peoples over their lands, territories, and resources several times. According to Rev. Fletcher Harper, Executive Director of Green Faith, Religions are extraordinarily new to this indigenous issue. Since this conference dealt with indigenous issues in a new way that had not been approached before, the Interfaith Rainforest Initiative was able to garner a lot of attention during this session. Due to this initiative focusing on religions, participants and international societies had the opportunity to discover a different way to view indigenous issues.

Nathan Phillips of the Native Youth Alliance, from the Omaha tribe in northeastern Nebraska, said that their religion has been denied by many policy makers. People have claimed it is not a religion, but spirituality. He asked the people in the conference and international societies for respect of their religion and faith in their life.

Below are two articles that discuss the 2016-2017 Standing Rock protests. The second one mostly talks about Phillips and other tribal members’ participation in the protests:

One year after protests end, ‘I would have done it all over again’

It’s starting to look like Phillips has quite a history of activism.

Is it possible he was brought into Washington, D.C. on purpose to cause faux outrage and give the fake news media ammunition to go after Trump supporters?

UPDATE #10: Here’s a great article regarding Phillips’ claim that he served in Vietnam:

ALSO SEE: Nathan Phillips Allegedly Lied About Being A Marine Combat Veteran During Vietnam War, According To Reports