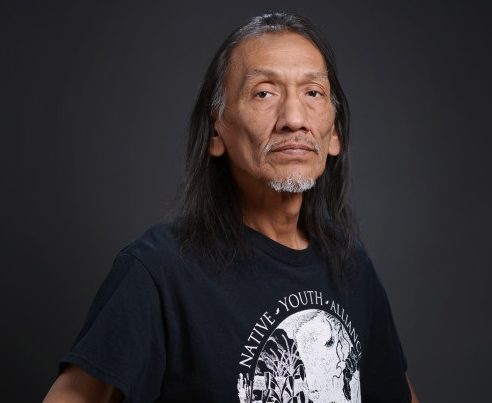 BREAKING Nathan Phillips, who was ‘harassed’ by Covington Catholic MAGA teens, lied about being a Marine Combat vet during Vietnam war. Phillips was born in 1955. He claimed to have joined the military at 17. That puts him at 1972. The last Marine combat unit left Vietnam in 1971 pic.twitter.com/rg9Yib8dvh

Other sources say marines were still stationed at the U.S. embassy when the liberation of Saigon occurred on April 30, 1975.

If Phillips’ claim about serving in Vietnam turns out to be false, it is a case of stolen valor and will look bad not only for himself, but also the mainstream media (who worked so hard to push his side of the story to the public).

UPDATE #1: Here is another outlet that is currently investigating whether Phillips actually served in Vietnam. They have apparently filed a request for his official military records:

UPDATE #2: Phillips reportedly claimed to have been a “Recon Ranger,” yet there is no such position in the U.S. Marine Corps with that exact title.

#NathanPhillips Claims to have been a "Recon Ranger" in Vietnam. https://t.co/6wmcPveB5i As a servicemember, let's break this down: There is no such thing as a "Recon Ranger". Closest is the 75th Ranger Regiment Reconnaissance Company, established 1984. Way after 'Nam. [1/11]

So instead, let’s look at the other possibilities: USMC Force Recon or Army Ranger. Well, most media I’ve seen paints him as a USMC vet, so Force Recon it is. Force Recon, in modern times at least, takes 9ish weeks of training, on top of basic USMC boot camp. [2/11]

Even in Vietnam, USMC Boot Camp lasted no less than 9 weeks. That means 3 months of training. Boot Camp even today lasts 12 weeks, so there’s no reason to believe FR school would be cut down. This means about 18 weeks of training, or 4.5 months. https://t.co/pQxwm94FYR [3/11]

The point here is that sometime in 1972, he did 2+ months of boot camp, apparently classed up immediately for 2.5 months of FR school, then was shipped immediately. Keep this in mind because we withdrew all COMBAT ELEMENTS of the Armed Forces from ‘Nam on March 29 1973. [5/11]

This would CERTAINLY include Force Recon, a combat force. Now, we ALSO didn’t send any more troops over there after the ceasefire in January 1973, so Phillips would have to have been there no later than that. https://t.co/v9uagRuOLq [6/11]

Where does that leave us? Phillips, claiming to be a “Recon Ranger” (when no Marine I know would dare to imply he was part of the Army Rangers, and the ONLY possibility of a “Recon Ranger” term is a unit not formed till a decade later). [7/11]

I’m not denying he served, but I am denying he served in anything but a peacetime military. I’ll point out that PHILLIPS HIMSELF never says “Vietnam WAR veteran” or simply “Vietnam veteran”, but a “Vietnam TIMES veteran.” as per his CNN interview. [8/11]

As a Sailor, I’m proud to serve, I’m also reluctant to use it as a virtue signal. That the media has chosen to rally behind this as a bullet point to prove how amazing of a person he is when video evidence PROVES he lied about the kids saying “build the wall” annoys me. [9/11]

Our service is not a weapon to be wielded to get our names in the news, or to slander high school children. This isn’t even the first time he’s done this. https://t.co/FmUSlvGVX7 [10/11]

Wanna complain about me trying to analyze his past? Think about all those kids YOU jackals screamed to dox, then reconsider. Phillips is not beyond reproach. There’s a reason there’s a sudden walkback across every major news outlet about “not having the full story”. [11/11]

UPDATE #3: Per a report from Granite Grok:

I have seen two references as to the age of (Native American) Nathan Phillips, the professional protester who has once again stumbled into the limelight of racial politics. He was allegedly harassed by college students in 2015.

Several new stories say he is 64 years old and I have seen a 2000 article from an Omaha newspaper saying that he was 45 years old. So let’s say he is 64.

Most stories about Nathan refer to him as a Viet Nam vet. Several refer to him as a Marine. I am 66 years old and know personally, of no one my age who went to Viet Nam. Several friends joined the various services right after graduation – 1972.

UPDATE #4: According to Twitter user @adagioforstring, Nathan Phillips is nowhere to be found in the Military.com ‘Buddy Finder’ database (Note: This list is not a guarantee of service. Names are self-submitted and not provided by the government):

Has anybody confirmed whether Nathan Phillips actually is a Vietnam veteran or if he is pulling a Blumenthal stolen valor scam? I couldn’t find a Nathan Phillips from Michigan in a https://t.co/U1yiwR40qy search pic.twitter.com/27UdBuFVwB

UPDATE #5: The Native American elder has a GoFundMe page titled ‘Fundraiser for Native Vietnam Vet Nathan Phillips’ that has raised over $300 so far. The campaign was created by user ‘Raina Meyer’ from Minneapolis, MN.

If it is true that Phillips is not an actual Vietnam veteran, this may prove troublesome.

UPDATE #6: A bit off-topic, but an image has just surfaced showing Phillips drumming in front of the Trump International Hotel in D.C. (source): 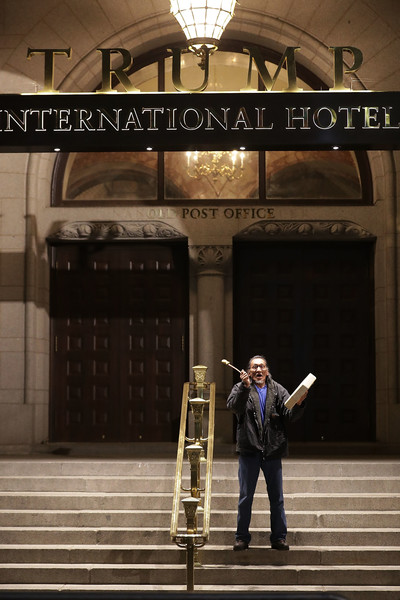 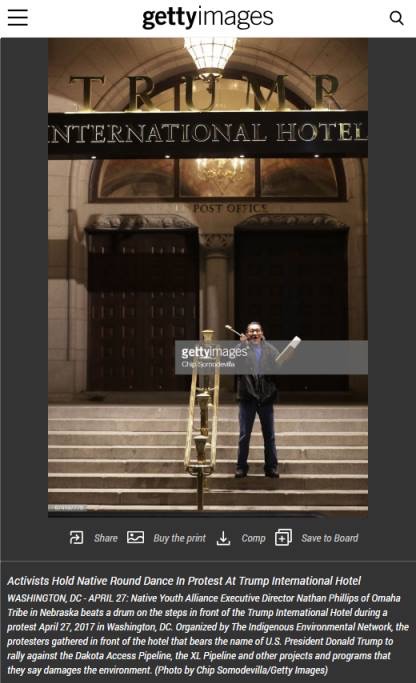 Activists Hold Native Round Dance In Protest At Trump International Hotel Washington, DC – April 27: Native Youth Alliance Executive Director Nathan Phillips of Omaha Tribe in Nebraska beats a drum on the steps in front of the Trump International Hotel during a protest April 27, 2017 in Washington, DC. Organized by The Indigenous Environmental Network, the protesters gathered in front of the hotel that bears the name of U.S. President Donald Trump to rally against the Dakota Access Pipeline, the XL Pipeline and other projects and programs that they say damages the environment. (Photo by Chip Somodevilla/Getty Images)

Does this prove Phillips is biased towards both Trump and his supporters (i.e. the Covington Catholic High School students)?

Mr. Nathan Phillips is affiliated with the Omaha Nation in Nebraska. Mr. Phillips served in the Marine Corps in Vietnam from 1972-76. He arrived to join the White House March from Arlington Cemetery. He had just completed a Peace Pipe ceremony and drumming to honor fallen soldiers. He visited DC from Michigan, where he and his wife are currently residing while she undergoes bone marrow treatment. There, Mr. Phillips drumming other activities include participation in the grass dance. He explained that many nations believe the Grass Dance it to be the oldest form of dance in this hemisphere, used to prepare a piece of ground for other activities many years ago. Mr. Phillips presence and blessing — are emblematic of the spirit to hold sacred our regard of the Earth.

“You have to be of sober mind and sober body because you have such a responsibility,” he stressed.

UPDATE #8: Just a few hours ago, The Washington Times published an article titled ‘Vietnam Veteran status of Native American at center of viral encounter in D.C. in question’:

According to multiple news accounts, the activist is 64 years old, which means he would have been 18 years old in 1973, the last year any U.S. combat units were stationed in Vietnam. Mr. Phillips also claims to be a Marine veteran, although the last Marine combat units left Vietnam in 1971.

A careful reading of Mr. Phillips‘ own descriptions does not make clear if he ever set foot in Vietnam. Instead, he has used much more careful language claiming he is a “Vietnam times veteran,” an ambiguous phrasing that led many media accounts to conclude he was a combat veteran.

Mr. Phillips could not be reached for comment Monday.

In a sacred pipe ceremony in Arlington National Cemetery, American Indians paid tribute to native veterans past and present.

Nathan Phillips, Omaha, keeper of the pipe, holds the ceremony annually on the Sunday after Veterans’ Day.

Phillips opened the ceremony with a call on a conch shell and asked the group to gather together. Phillips is the former director of the Native Youth Alliance and now oversees their Heritage of Healing Project. Phillips, as the keeper of the pipe for the ceremony, has attended the event for the past 15 years.

The drum group, Nama-wo-chi, which translates “Native Man, Woman and child,” had traveled from North Carolina to Arlington, Va. to perform. They began with a calling song to honor “all of the veterans for all wars.”

After giving offerings of sage, Sweetgrass, tobacco and food to the spirits and ancestors, Phillips asked if any of the crowd of about 30 people would like to share. Many came forward to express memories of past Native veterans and concerns about soldiers currently serving in Iraq and those being deployed.

UPDATE #10: ‘MLive‘ interviewed Mr. Phillips after he was allegedly involved in an altercation with students from EMU.

UPDATE #11: Here are a few instances where the MSM and others have referred to Phillips as a “Vietnam War veteran” or another similar title/description (source):

Washington Post*: “…Phillips, an Omaha tribe elder who fought in the Vietnam War…”

*the Washington Post has since stealth edited this story but the original clip is below:

Huffington Post: “Phillips served in the Vietnam War and is the former director…”

UPDATE #12: Several non-profit organizations have filed FOIA requests to obtain more information about Phillips’ military service, but it takes between 4-6 weeks to get any type of response.

Here is WaPo’s correction from the article seen above:

UPDATE #15: In a November, 2017 video posted on the Native Youth Alliance Facebook page, Phillips discussed a number of things, but at around the 5:40 mark, he clearly states “Vietnam veteran”:

Transcript of that portion of the video:

“…I was really trying to figure out, you know, what was my purpose here in this world. What was it all about, you know. Vietnam veteran. Taking [me] away from my family when I was five. Put into foster homes…”

RELATED: New Videos Emerge Showing What Really Happened Before, During And After The Confrontation Between A MAGA Hat-Wearing Student And Native American Drummer