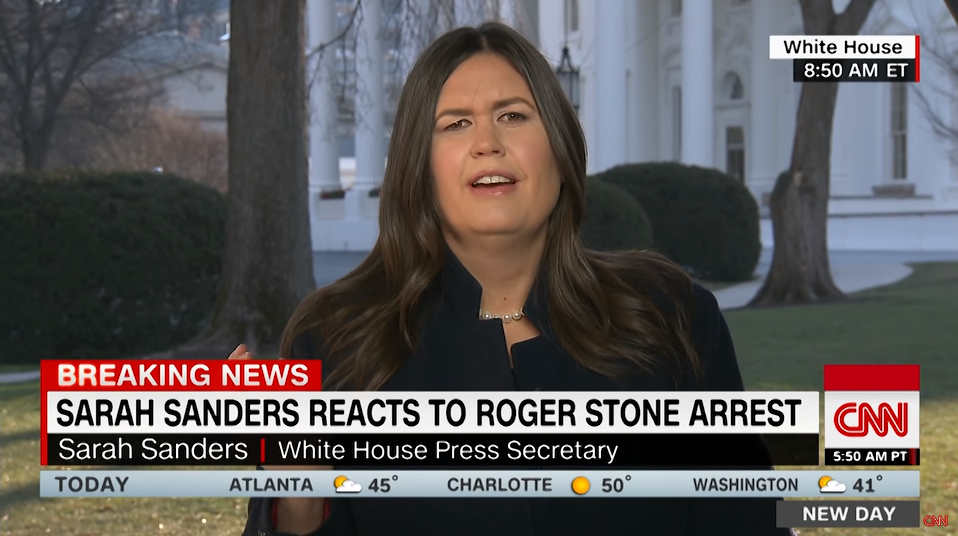 At one point in the conversation, Sanders asked if CNN itself is guilty of collusion:

“I was a member of the campaign which is why I know there was — as I have said a dozen times, as the President said probably hundreds of times — there was no collusion, there was no wrongdoing by the President. What I also know is that outlets just like yours, CNN spent a significant time not only looking for information of Wikileaks but also reporting on it. Does that mean CNN is guilty of collusion?“

She makes a good point.

Also, why was a CNN video crew tagging along with the FBI during their pre-dawn raid of Roger Stone’s house? They were literally able to capture live footage of the event!

Were they tipped off? Are they working with the Deep State (i.e. decades-old government agencies such as the FBI)?

According to Big League Politics:

The crux of the investigation into Stone is that he sought “hacked documents related to Hillary Clinton’s campaign WikiLeaks would release during the 2016 election season.”

Stone himself never hacked anyone. In fact, the DNC may not even have been hacked – that is still not settled. The bottom line, to Sanders’ point, is that obtaining opposition research against a political foe is a normal campaign activity. Mueller’s team has spun up a process crime against Stone after investigating him for something that is not even a crime in the first place.

UPDATE: CNN producer admits he was “waiting” outside Roger Stone’s house an hour before arrest:

CNN producer @davidgshortell describes the moment Roger Stone was taken into custody by the FBI. The longtime Donald Trump associate has been indicted by a grand jury on charges brought by special counsel Robert Mueller https://t.co/wUJEIkKDTw pic.twitter.com/AJ3JWWSHs3