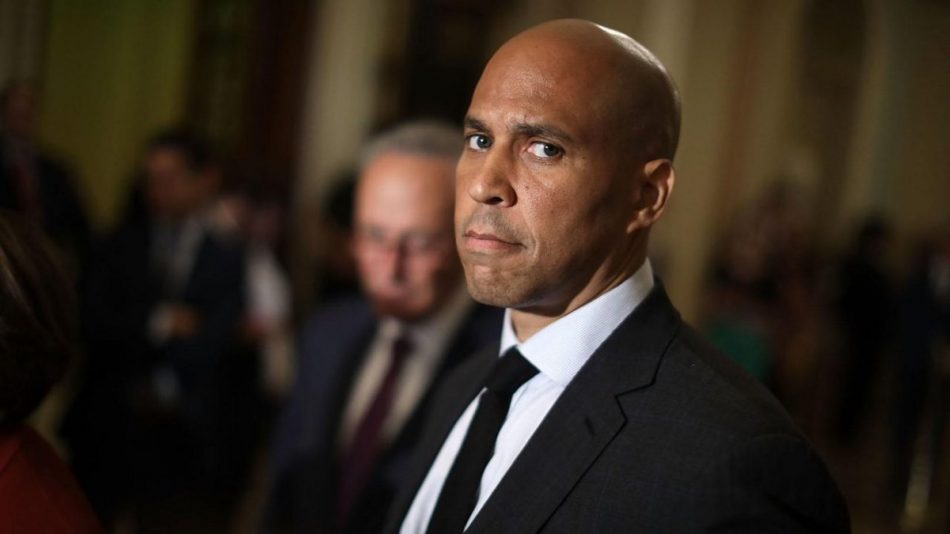 While in high school, 2020 Democratic presidential hopeful Cory Booker groped his classmate when he “reached for her breasts” not just once, but twice, according to The Washington Post.

Booker chose decades ago to disclose the incident, but that doesn’t make everything just “fine and dandy.”

In 1992, while attending Stanford University, the Democratic senator wrote a column for his college newspaper in which he talked about the groping incident:

“After having my hand pushed away once, I reached my ‘mark.’ Our groping ended soon and while no ‘relationship’ ensued, a friendship did. You see, the next week in school she told me that she was drunk that night and didn’t really know what she was doing.“

“Our groping ended soon.” Huh? What was he trying to say, exactly?

That it was also HER fault he repeatedly groped her?

Oh, was it because SHE had some drinks and “didn’t know what she was doing” at the time?

That makes absolutely no sense (and, yes, the above quote was taken directly from WaPo / archive link).

Would this kind of conduct fly in today’s supercharged, politically correct climate? Probably not.

Booker reportedly dismissed his behavior by claiming he was a “very drunk kid” and experienced some wild moments, just like anyone else at that age.

But, that’s not the first time he crossed the line.

In 2014, a man, who wishes to remain anonymous, was allegedly sexually assaulted by the New Jersey senator “in a bathroom following a meeting at his workplace”:

#CoryBooker Sexually Assaulted Me
and why it won't matter to the #metoo movement. https://t.co/8VQuMGY8bj pic.twitter.com/D5DWnFmfzd

I stopped to use one of the building’s single-occupancy restrooms. Upon washing my hands prior to leaving, I hear knocking on the door. When it comes to these restrooms, it is customary to knock first in case someone is using it, even though there is an inner lock. When I opened the door, Mr. Booker was there. He smiled and very gregariously said, “Hey!” We engaged in some brief idle chitchat in the entryway and then he asked me to speak in private. What happened next, happened so fast that it was hard for me to comprehend what was going on. It was one of those surreal moments where what was happening was such a deviation and such a perversion of one’s natural daily routine that I hardly knew how to react. He pulled me into the bathroom, albeit not too forcefully, and slowly pushed me against the restroom wall. He said that “Being a hero was a serious turn-on.” He continued, “The Senate appreciates fine citizens like you. Especially this senator.” He then put his left hand on my groin, over my jeans, and began to rub. I seem to remember saying something like “What is happening?” It was a bit like having vertigo. He then used his other hand to grab my left hand with his right and pulled it over to touch him. At the same time, he disengaged from rubbing me and used his left hand to push me to my knees from my shoulder for what was clearly a move to have me perform oral sex on him. At that point, I pulled away quite violently and told him I had to go. I did not see him again before he left.

Twitter user @TheeDeepThroat posted a follow-up the next day:

Brief follow-up to some concerns that have been raised: pic.twitter.com/6zjDu0vaIS

It is unknown whether or not the man’s accusation is true, but considering Booker’s past ADMITTED misconduct, it’s not too far fetched to believe the bathroom incident actually did happen.

ALSO SEE: The Cory Booker Columns That Could Ruin His Candidacy