Rather than standing firm and pursuing important, hard-hitting issues (e.g. censorship) that many of his almost 4.5 million subscribers wanted to finally hear about, Rogan tippy-toed around the real questions and essentially let Dorsey run the interview by spouting his usual lies and disinformation.

Well, that has backfired in a major way and now Rogan seems a little nervous. He’s even posted on his Facebook page, saying he’ll have Dorsey back on and asked his viewers to “please leave a mention in the comments” in case they want “anything in particular” brought up:

Many commenting on the video have called Rogan out for asking softball questions and actually censoring (i.e. deleting) negative comments on his channel (much like what Twitter does to conservative accounts, which is a bit ironic).

On Sunday, Infowars host Alex Jones, who has been a longtime friend of Rogan, completely disavowed the popular podcaster.

In a video posted on YouTube channel ‘Infowars Re-Uploaded,’ Jones let the cat out of the bag, per se.

Note: Scroll down to view the video on YT (as well as a backup link).

Jones’ motivation for calling out Rogan may stem from the moment when Rogan asked Dorsey why Infowars and Jones were completely censored and removed from Twitter. Dorsey said he was “not familiar with the case” and Rogan failed to follow-up; rather, he simply moved onto the next topic very quickly.

Wow, Joe. That was such a nice thing of you to do to your pal Alex, who you’ve been friends with for 20+ years…

On his show, Jones made a number of interesting statements before getting into the real dirt on Rogan.

“Let me get to this point,” Jones said. “I’m not happy to have to attack Joe Rogan. And, Joe Rogan is a very passionate, smart charismatic guy.”

“But, Joe is highly driven,” he continued. “He’s really a dark person. I think that comes from an insecurity complex of being from a poor family in Boston.”

Jones then mentioned his appearance on Rogan’s show and how it was one of the most highly viewed JRE videos at the time.

He explained how he thought it was a great opportunity to go on Rogan’s show and fight back against the fake news that was being propagated about his own company, Infowars.

Jones said he noticed that Rogan started “putting out establishment talking points” in the last year and actually began to personally attack him “with those exact talking points.”

The Infowars host then revealed he found out Rogan was sponsored by Jack Dorsey and George Soros (of all people).

Jones said Rogan was “on the payroll” and is making more money than The Young Turks, a very popular far-left YouTube channel.

Jones continued and accused Rogan of defending George Soros by saying he “fought the Nazis and was a hero in World War 2.”

He then followed up with the comment, “Man, that’s really sick. [Soros] was on 60 Minutes bragging [about how he helped] round up Jews.”

Jones said he called Rogan on the phone four months ago and confronted him about not being invited back to the podcast:

“Listen man, you don’t have to have me on your stupid show. I don’t care about getting on big platforms… or I would have sold out.

“I piss on Hollywood. I refused their top contracts to be starred in a damn movie, because it’s a sellout.

“Sure, I’d be big in movies. Sure, people watch me already. I don’t need their system.”

“I told him. I said, ‘You run your mouth with George Soros talking points anymore, I’m coming after you because it shows you’re working for them.’

“He kept doing it.

“And then I got really depressed because I realized the only time I ever sold out in my life… strangely enough, because I’ve known Joe for like 20 years. I have this loyalty thing where it’s not a sellout, but I’m like a dog. I’m so loyal, that even though somebody’s not my friend, I’m still loyal because they said they were.”

Jones then explained how he has discovered a whole bunch of things about Rogan, including being “on the payroll of Jack Dorsey” for $300,000 a month. The ‘Cash App’ Wikipedia page was momentarily flashed on the screen: 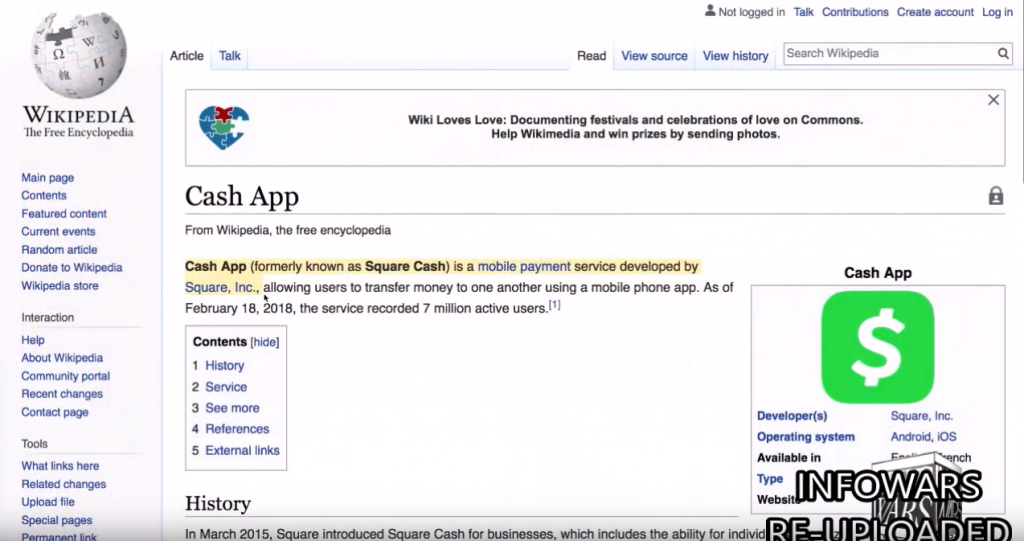 The company is owned by Dorsey and is a sponsor of Rogan’s show:

Instant buying (and selling, if you don’t want to hodl) of Bitcoin is now available to most Cash App customers. We support Bitcoin because we see it as a long-term path towards greater financial access for all. This is a small step.

In a bold statement regarding Rogan selling out, Jones proclaimed, “You think you’re going to sit there and attack free speech and piss all over America?”

As Jones was speaking, his producers showed a page listing sponsors of the JRE Podcast, which are numerous: 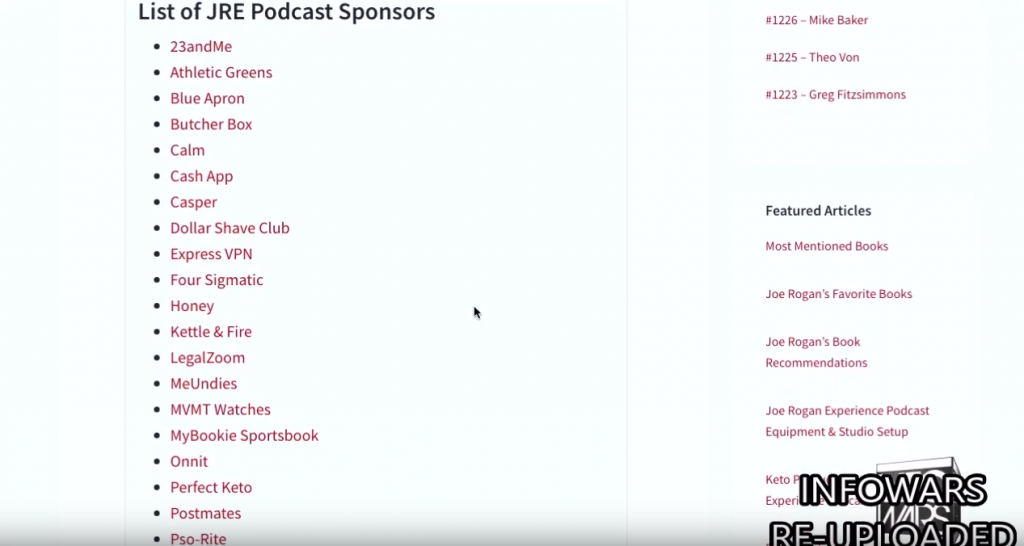 “Thank God I didn’t go back on Joe’s show.

Jones went on to calling Jack Dorsey an “oiled pimp” and a “frontman of DARPA.”

Watch the video below, where he fully gets into Rogan’s corrupt connections to both Dorsey and Soros:

In a wide-ranging two hour interview published Saturday, Jack addressed a number of topics … including questions about Bitcoin.

Here’s what Jack had to say:

“The reason we enabled the purchasing of bitcoin within the Cash App is we wanted to learn about the technology and we wanted to put ourselves out there and take some risks.”

“We would love to see something become a global currency. It enables more access. It allows us to serve more people. It allows us to move much faster around the world. We thought we were going to start with how you can use it transactionally, but we noticed that people were treating it more like an asset, like a virtual gold, and we wanted to just make that easy, just the simplest way to buy and sell bitcoin.”

“It had to come with constraint, because you know, three years ago, people did some really unhealthy things about purchasing bitcoin. They maxed out their credit cards and put all their life savings into bitcoin.”

A CHILDREN’S BOOK ABOUT BITCOIN

“We even made a children’s book explaining what Bitcoin is and where it came from and how people use it and where it might be going.”

ABOUT INSTITUTIONAL BANKING AND BITCOIN

“Look at some of the major banks and their consideration around bitcoin… There’s no centralized control over it. And I think that’s threatening.”

“It’s certainly threatening to certain services behind banks and financial institutions. It’s threatening to some governments as well. So I just look at this like how can we embrace this technology and not react to it more from a threat standpoint?”

ABOUT TECHNOLOGICAL AND COMMERCIAL DISRUPTION

“What does it enable us to do and where does our value shift? And that’s what we should be talking about right now: how our value shifts. And there is always really strong answers to that question, but if you’re not willing to ask that question in the first place you will become irrelevant, because technology will continue to march on and make you irrelevant.”

This is interesting because, as we explained before, Dorsey owns Cash App, which is a Bitcoin and cryptocurrency processor.

He was essentially trying to “pump up” crypto, which would then affect the (financial) success of his app. 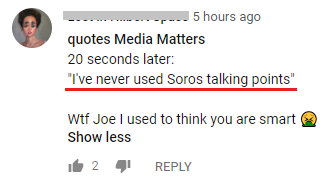 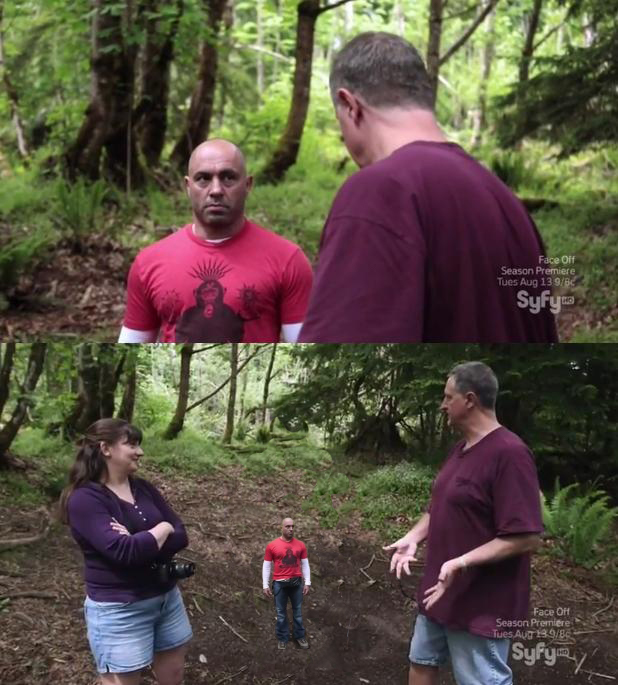 Jones said he is going to “destroy him” and expose everything on not only Rogan, but Jack Dorsey…

RELATED: Joe Rogan Becomes Concerned When “Random” People Show Up At His Studio During Live Podcast…