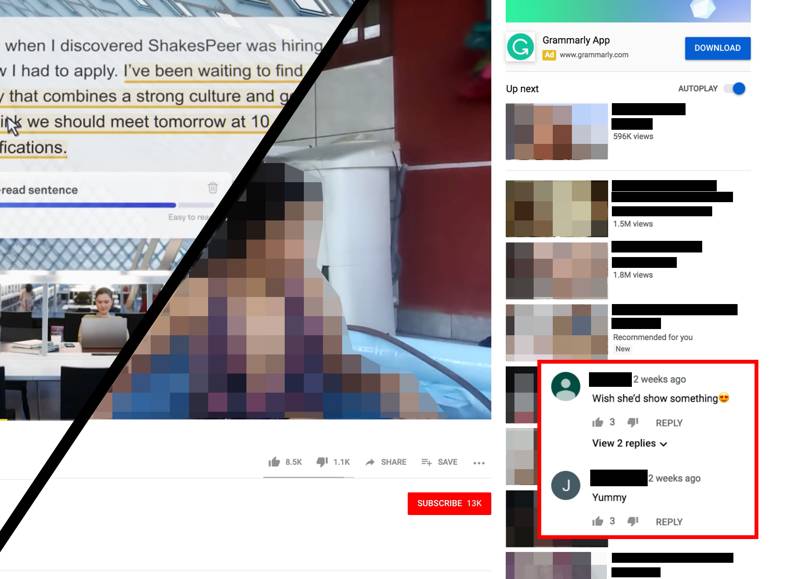 DISTURBING: On YouTube, A Network Of Paedophiles Is Hiding In Plain Sight

TCC Editor’s Note: The following content may be disturbing, but this is reality and we believe it is important to expose what is going on. We’re really glad to see a huge outlet like Wired cover this important topic.

Parents, please monitor what your children are doing and/or watching online…

Videos of children showing their exposed buttocks, underwear and genitals are racking up millions of views on YouTube – with the site displaying advertising from major cosmetics and car brands alongside the content.

Comments beneath scores of videos appear to show paedophiles sharing timestamps for parts of the videos where exposed genitals can be seen, or when a child does the splits or lifts up their top to show their nipples. Some of the children in the videos, most of whom are girls, appear to be as young as five. Many of the videos have hundreds of thousands, if not millions of views, with hundreds of comments.

The videos are also being monetised by YouTube, including pre-roll adverts from Alfa Romeo, Fiat, Fortnite, Grammarly, L’Oreal, Maybelline, Metro: Exodus, Peloton and SingleMuslims. Banner advertising for Google and the World Business Forum also appeared alongside some of the videos. As well as providing YouTube with our research, we contacted the advertisers to alert them to the issue.

Videos of little girls playing Twister, doing gymnastics, playing in the pool and eating ice lollies are all routinely descended upon by hordes of semi-anonymous commenters, sharing time codes for crotch shots, directing other people to similar videos of children and exchanging phone numbers along with a promise to swap more videos via WhatsApp or Kik. On some videos, confused children who have uploaded videos of them playing in the garden respond to comments asking them how old they are. On one video, a young girl appears to ask another commenter why one of the videos had made him “grow.” The video shows the child and her friend doing yoga and is accompanied by pre-roll advertising from L’Oreal. The video has almost two million views.

“We’re absolutely horrified and have reached out to YouTube to rectify this immediately,” a Grammarly spokesperson said. “We have a strict policy against advertising alongside harmful or offensive content. We would never knowingly associate ourselves with channels like this.”

A spokesperson for Fortnite publisher Epic Games said it had paused all pre-roll advertising on YouTube. “Through our advertising agency, we have reached out to YouTube to determine actions they’ll take to eliminate this type of content from their service,” the spokesperson added. A World Business Forum spokesperson said it found it “repulsive that paedophiles are using YouTube for their criminal activities.” A Peloton spokesperson said it was working with its media buying agency to investigate why its adverts were being displayed against such videos.

YouTube says that it’s 99 percent effective at ensuring that adverts only appear on appropriate content and that it takes every instance of ads showing up where they shouldn’t very seriously.

But with a blank YouTube account, and a couple of quick searches, hundreds of videos that are seemingly popular with paedophiles are surfaced by YouTube’s recommendation system. Worse still, YouTube doesn’t just recommend you watch more videos of children innocently playing, its algorithm specifically suggests videos that are seemingly popular with other paedophiles, most of which have hundreds of thousands of views and dozens of disturbing comments. Many include pre-roll advertising.