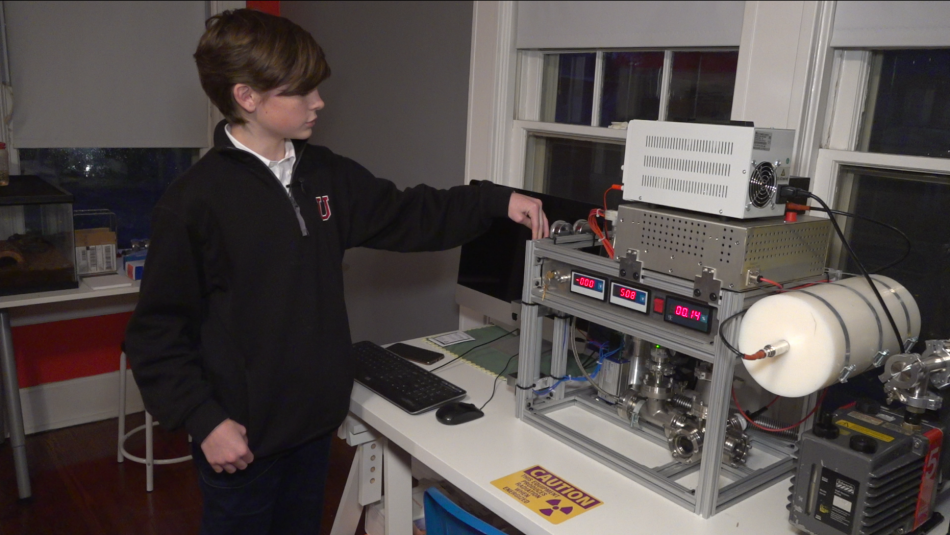 Jackson Oswalt, now 14, achieved the impossible: he built a nuclear fusion device in his home “laboratory” in Memphis, Tennessee at the age of 13-years-old.

Unlike some other teens, Oswalt wasn’t interested in playing video games or spending time on social media. Instead, his passion was researching “nuclear-related” things that he found on the Internet.

According to a Fox News report:

The Memphis teen finished his reactor and achieved fusion at the age of 13. He’s regarded by experts as the youngest in America – maybe even the world – to accomplish it. Jackson built a steel machine made up of vacuums, pumps and chambers that is capable of smashing atoms together through force in a smoking hot plasma center that releases a burst of fusion energy. If you’ve ever wondered how the sun and other stars are powered, the process within Jackson’s nuclear fusion reactor is comparable.

In 2008, 14-year-old Taylor Wilson also constructed a nuclear fusion reactor in his parents’ garage in Texarkana, Arkansas. His accomplishment garnered international recognition and, at the time, he was known as the youngest person to ever achieve fusion.

In a recent interview, Oswalt said his goal was to beat Wilson’s record and explained the tedious learning process he went through in order to do that:

“The start of the process was just learning about what other people had done with their fusion reactors. After that, I assembled a list of parts I needed. I got those parts off eBay primarily and then often times the parts that I managed to scrounge off of eBay weren’t exactly what I needed. So, I’d have to modify them to be able to do what I needed to do for my project.”

This was how serious Oswalt got about his new endeavor: he converted an old playroom in his Memphis home into a fully functioning laboratory. His parents helped out with the costs and spent nearly $10,000 over the course of a year for the parts needed to build his nuclear fusion reactor.

Putting the fusion reactor together and testing to see if it worked was the real challenge. Since there isn’t exactly a manual on how to build something like that he relied on trial and error and the Open Source Fusor Research Consortium, an online forum for amateur physicists, to ensure that he was taking the proper steps toward successfully building a fusion reactor and hopefully achieving fusion.

“After a while, it became pretty simple to realize how it all worked together, but at the start it was definitely figuring out one aspect of it, memorizing what that actually meant and then moving on to a different aspect of it,” Jackson said. “Eventually all those pieces of the puzzle came together to make a good project.”

The dangers of pursuing such a scientifically-complex project were deathly real; Oswalt could have been exposed to high levels of radiation or even electrocuted by the 50,000 volts of electricity needed to warm the fusion reactor’s plasma core.”

Oswalt’s father, Chris, said he made sure his son stayed safe by speaking to experts in the field nearly every step of the way.

The teen kept a journal of sorts that detailed his progress on the Open Source Fusor Research Consortium.

On January 19, 2018, just hours before his 13th birthday, Oswalt announced he had achieved fusion. He had successfully been able to combine two atoms of deuterium gas in the fusion reactor’s plasma core which ejected a neutron into a device that slowed it down and detected nuclear fusion.

Richard Hull, a former engineer from Richmond, Virginia and administrator of website Fusor.net, was able to confirm Oswalt’s results and believes the teen is the “youngest in America, and possibly the world, to achieve fusion.”

Published in Science, Technology and U.S.