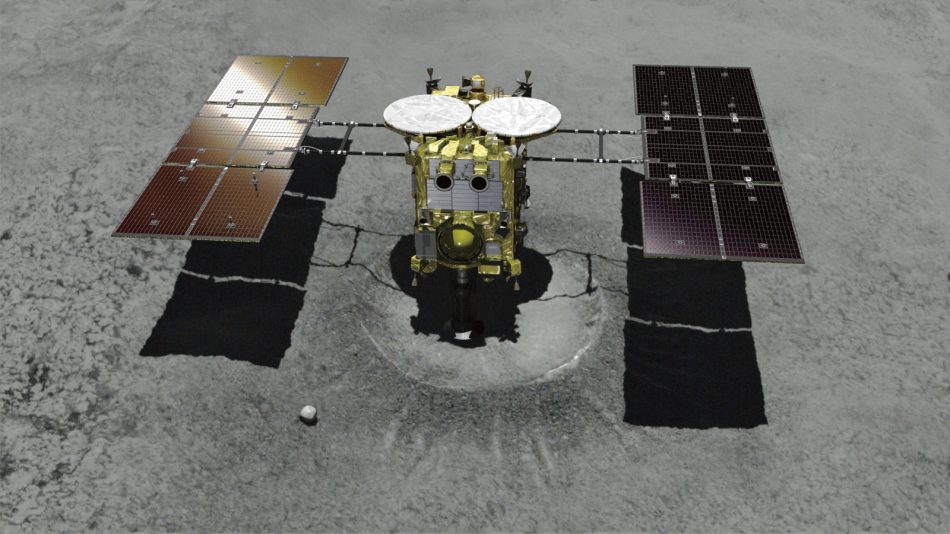 Japan’s Hayabusa2 spacecraft has successfully touched down on the surface of asteroid Ryugu to accomplish one of its ultimate goals: collect samples for scientists back on Earth. The probe has briefly landed on the asteroid to fire a bullet into its surface and kick up dust, rocks and any other debris that it can collect. Hayabusa2 has been hovering around Ryugu since mid-2018 and even dropped two landers on the floating rock to study its surface and take photos.

It started its descent on February 21st, 6AM Japan time, taking photos of what it saw as it approached the asteroid. This photo was one of the last it captured before it fired the bullet:

Since it lost contact with its ground team when it touched down, the Japanese Aerospace Exploration Agency had to wait for it take flight again and restore communications. It only took the spacecraft a second to fire that bullet and take off again, though, so we’re now just waiting to hear if it has successfully collected samples.

#Hayabusa2 #JAXA -Big round of applause in the control room Confirmed the program for touchdown , sounds like touchdown has been confirmed! Samples are being captured. pic.twitter.com/3NjcuGjZQJ

Here's an edited version of that video JAXA just showed, where the tantalum bullet fires into the surface. pic.twitter.com/mCLkBoWK94

Published in Science, Technology and World