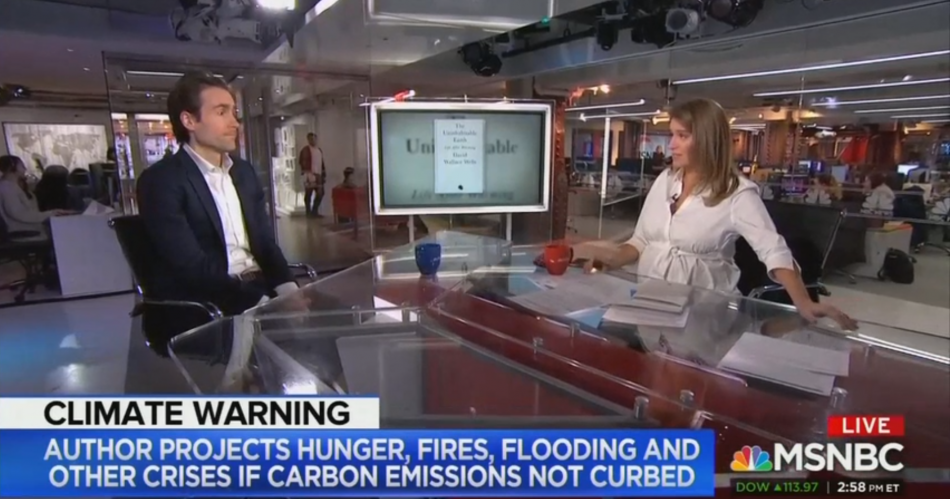 On Monday, MSNBC host Katy Tur plugged ‘The Uninhabitable Earth,’ a new global warming book, during the last six minutes of her show.

The host suggested there is a “need to scare people” and make them “hair-on-fire alarmed” when it comes to climate change.

News outlet MRC reports the book’s author, David Wallace-Wells, was actually on set during the short segment on Live with Katy Tur where he was given an unchallenged forum to promote his views.

Before the interview, Tur started off by saying, “‘It is much, much worse than you think.’ That’s the first line of a new book devoted to explaining why you shouldn’t just be worried about climate change — you should be hair-on-fire alarmed.”

“A deadly increase in wildfires, water scarcity, drought, flooding, mass famine, mass disease — all potentially in the lifetime of your toddler.”

She continued to talk about how important it is to “scare people” on the issue:

“There’s been a debate among environmentalists, among climate change scientists and those talking about it — about how alarmist scientists should be about the pace of change and what could happen in the next 80 or so years. It seems like more scientists are leaning towards that we need to really sound the alarm, and we need to scare people.”

Wallace-Wells quickly chimed in and went through a list of “terrifying” consequences that he believes will most likely happen over the next few decades:

The MSNBC host concurred and mentioned how the recent wildfires in California were a result of global warming.

According to a recent News Busters article:

Meteorologist and global warming skeptic Joe Bastardi has notably argued that the patterns of rain and drought that have helped feed recent wildfires do not amount to evidence supporting climate alarmism, and has also argued that an increase in the number of humans moving into greater parts of the California wilderness has also factored into recent increases in wildfire fire magnitude.

Near the end of the show, Tur asked Wallace-Wells how he was going to convince people to read a “scary book” about an “uninhabitable Earth.”

She then snuck in a low-blow question about President Trump’s administration: “And what do you think of the White House now convening a panel of scientists in order to combat what is the accepted analysis of climate change?”

Wallace-Wells responded and immediately pounced on the opportunity to attack Trump’s policies by calling them “terrible,” “horrible” and “morally abhorrent.”

Watch the interview below:

Published in U.S. and Weather