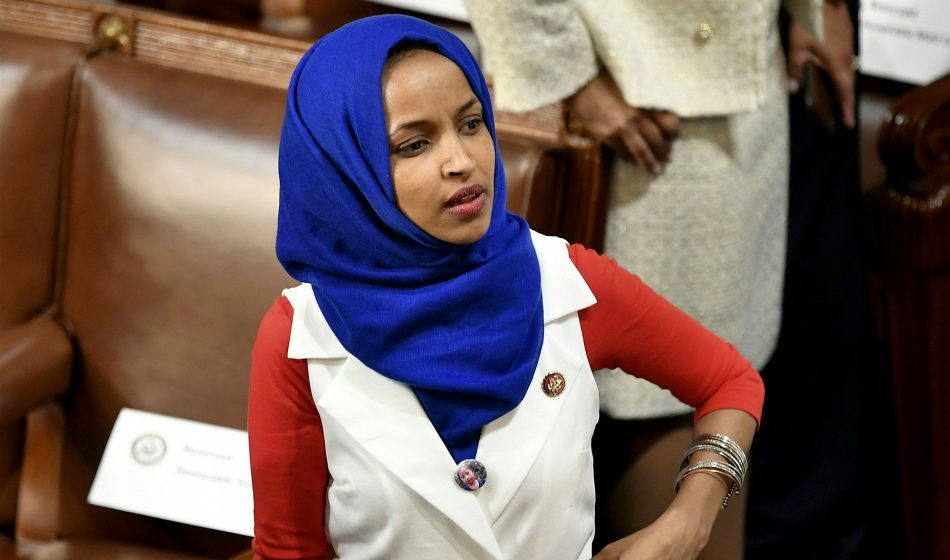 An image of Muslim Rep. Ilhan Omar, D-Minn., superimposed next to a picture of a plane crashing into the World Trade Center sowed tumult in the West Virginia House of Delegates Friday, leading to a resignation and an injury.

The poster seemed to be an attempt to tie the Minnesota Democrat to the terror attacks of Sept. 11, 2001. The poster was exhibited in the rotunda of West Virginia’s Capitol Building during “ WV GOP Day.”

Along with the Republican Party of West Virginia, a number of organizations had set up displays Friday. One of those displays had a picture of the congresswoman, who came to the U.S. as a refugee from Somalia as a child,, below a plane hitting the Twin Towers with the words, “’Never forget’ – you said..” over the image of the burning buildings and the words, “I am the proof you have forgotten,” over the image of Omar.

[Democratic Del. Mike Pushkin] tweeted out a photo of the poster, writing: “This poster is in your Capitol on a booth sponsored by @WVGOP ‘When someone shows you who they are, believe them.’”

This poster is in your Capitol on a booth sponsored by @WVGOP “When someone shows you who they are, believe them” pic.twitter.com/4k566ztHWo

The poster caused controversy and commotion in the Capitol all day. It created a heated debate in the hallway that spilled into the House chamber. Sergeant at Arms Anne Lieberman submitted a letter of resignation after she was accused of using an anti-Muslim slur, according to a report from WSAZ.

“The sergeant of arms of this body had the nerve to say to us ‘all Muslims are terrorists.’ That’s beyond shameful and that’s beyond freedom of speech,” said Del. Michael Angelucci, a Democrat.

The situation became physical when Del. Mike Caputo, a Democrat, kicked open the entrance to the chamber. A doorkeeper who was holding the door shut during the daily prayer and pledge of allegiance was reportedly injured.

Omar herself responded to the controversy out of West Virginia on Twitter Friday, writing: “No wonder why I am on the ‘Hitlist’ of a domestic terrorist and ‘Assassinate Ilhan Omar’ is written on my local gas stations.”

No wonder why I am on the “Hitlist” of a domestic terrorist and “Assassinate Ilhan Omar” is written on my local gas stations.

Look no further, the GOP's anti-Muslim display likening me to a terrorist rocks in state capitols and no one is condemning them! https://t.co/0ouCaloWqh