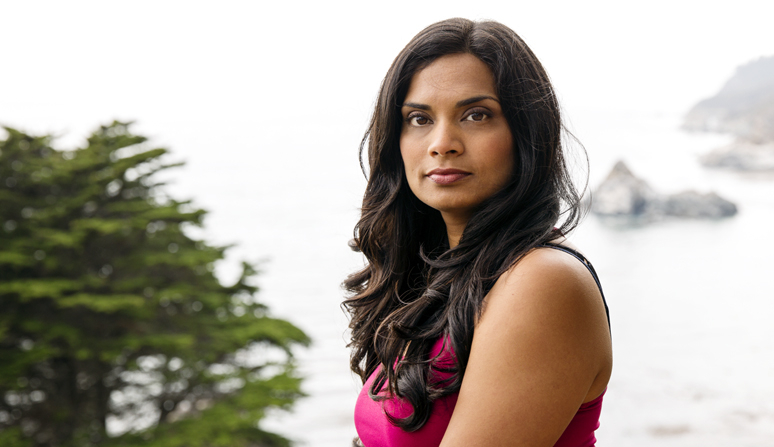 On Tuesday, Twitter Founder and CEO Jack Dorsey, along with his legal counsel Vijaya Gadde and independent journalist Tim Pool, appeared on the ‘Joe Rogan Experience‘ to discuss a number of topics.

One person in particular claimed there was a very interesting ‘hot mic’ interaction after the show ended involving Pool and Gadde:

They had to take it down & prolly editing it. After the show ended the lawyer puppeteer started talking to Tim & the mics were hot and the stream froze. I heard it all She wanted names of people he refused to name and twitter handles saying ‘what if I promise to not take action?’

We asked the viewer if he had an audio recording of this interaction, but unfortunately he did not. We’ll continue to search for one.

So, who is Vijaya Gadde?

According to Fortune’s 40 Under 40 list, Vijaya Gadde was born in India and “has proved vital to Twitter’s efforts at international expansion.” She has helped “steer the company through one of the most anticipated initial public offerings in recent years” and is the “only woman on Twitter’s executive team.” 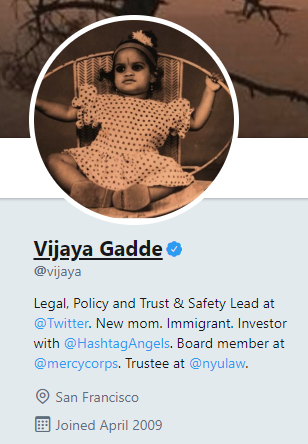 Some of these followed accounts include Pakistan Prime Minister Imran Khan, Senator Kamala Harris (D-CA), Representative Ro Khanna (D-CA), Women’s rights activist Wai Wai Nu, far-left columnist Shaun King and California State Senator Scott Wiener (D-San Francisco), who, in 2017, introduced a bill that drastically reduced the sentence of those who knowingly expose their sexual partners to HIV from a felony to a misdemeanor.

Gadde is also the treasurer of Twitter’s official PAC: 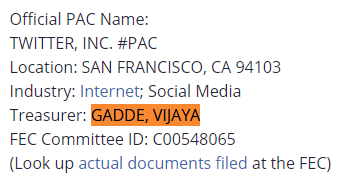 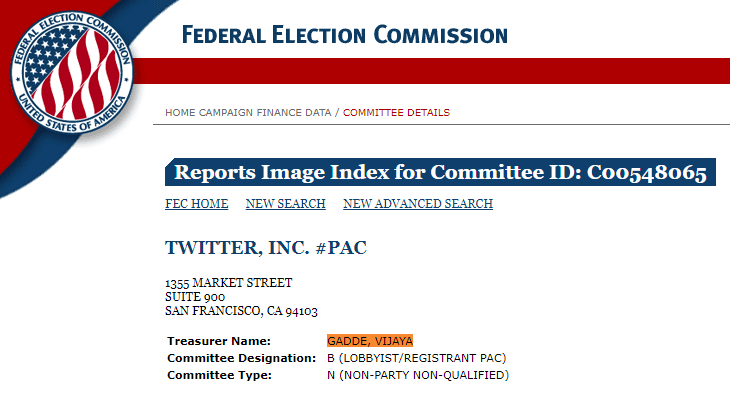 A couple of years before the 2016 presidential election, the lawyer sent out a tweet about a meeting she had with Hillary Clinton at Twitter’s HQ in San Francisco, saying it was “amazing” and “full of great advice and inspiration”:

Such an honor to meet @HillaryClinton today. Amazing talk at @twitter – full of great advice and inspiration! pic.twitter.com/KnIo1uhQKk

In December, 2015, Gadde posted a message advocating for gun control in America:

If money is the only thing that works with congress, we need $30m to pass gun control laws in America. https://t.co/tepIQOGEiK

In March, 2016, she tweeted a quote from New York Times columnist Nicholas Kristof which said:

“I’ve never met a national politician in the U.S. who is so ill informed, evasive, puerile and deceptive as Trump.”

"I’ve never met a national politician in the U.S. who is so ill informed, evasive, puerile and deceptive as Trump." https://t.co/Wv1tXKGWAF

A year later, Gadde responded to a message from CNN’s Jake Tapper:

This is a yet another incoherent policy distraction taking focus away from real problems we are facing – healthcare, immigration & Russia https://t.co/T8XVoCNfc6

Not surprisingly, the Silicon Valley lawyer clearly has a political bias, which she is not afraid to share on social media. This deep-seated bias most likely leaks into her professional life at Twitter, resulting in top execs and staff deciding to shadowban or outright censor conservative and right-leaning accounts.

UPDATE #1: Luckily, someone was able to record the ‘hot mic’ conversation between Vijaya Gadde and Tim Pool. Listen below (Warning: turn down your volume before playing) –

Gadde: …Want to follow up on a couple things because they worry me. You mentioned an Antifa account that doxxed policemen. Can you please just send that over to me?

Gadde: [Repeats link] And then, would you DM me the accounts that you said have threatened you?

Pool: No. I believe in minimizing harm and if… so, when Patreon…

Pool: So, uh, when Lauren Southern got banned from Patreon, a lot of people were…

Rogan(?): Hold on. Stop! Everybody out of the room! This is streaming and it’s frozen. Something’s wrong.

UPDATE #2: Here is a great video from Project Veritas founder James O’Keefe that exposes the blatant lies both Dorsey and Gadde told Rogan regarding their ability to view private DMs on the platform –

Twitter execs said on @joerogan podcast yesterday that they do not read your DMs – last year's Twitter videos show their employees stating the opposite. Comment, @jack? @timcast @vijaya pic.twitter.com/rKRz7XwzJl