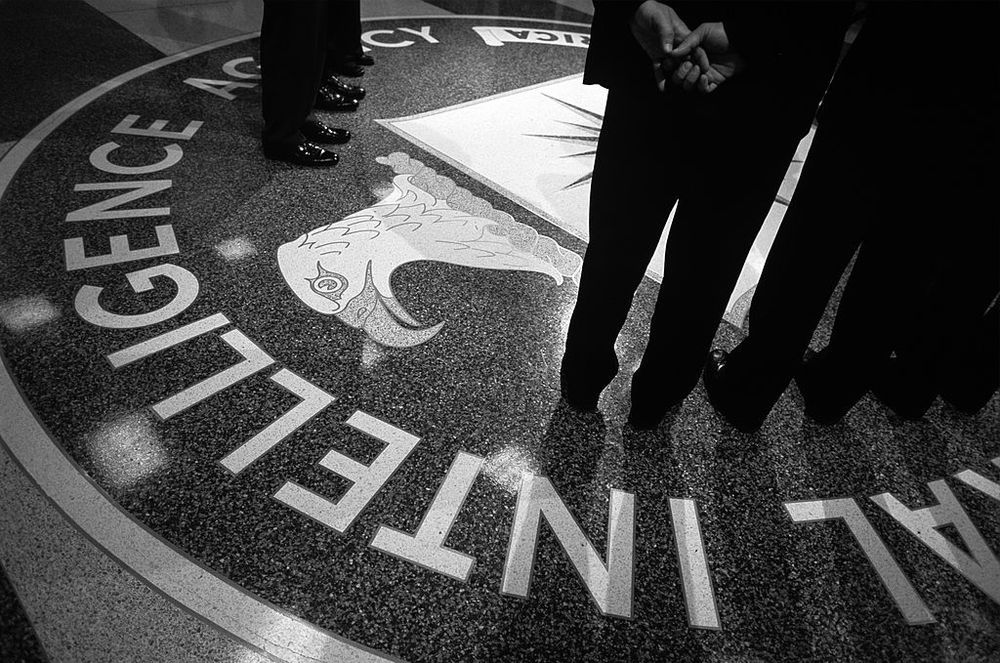 According to CREST’s description:

Since 2000, CIA has installed and maintained an electronic full-text searchable system named CREST (the CIA Records Search Tool), at NARA II in College Park, Maryland. The CREST system is the publicly accessible repository of the subset of CIA records reviewed under the 25-year program in electronic format (manually reviewed and released records are accessioned directly into the National Archives in their original format). Over 11 million pages have been released in electronic format and reside on the CREST database, from which researchers have printed about 1.1 million pages.

Some of these records cover topics such as:

Due to the massive scale of CREST’s database, we’d like to focus on just a couple of topics in this article (Note: Clicking on any of the links above will bring you straight to the CIA’s archive where you can explore to your heart’s content).

The OSS records in particular caught our eye because Infowars host Alex Jones briefly discussed the organization while appearing on the ‘Joe Rogan Experience’ last month. He mentioned how it was a sort of “precursor” to the CIA during WWII.

Here is a quick rundown on the OSS:

The Office of Strategic Services (OSS) was a wartime intelligence agency of the United States during World War II, and a predecessor to the Central Intelligence Agency (CIA). The OSS was formed as an agency of the Joint Chiefs of Staff (JCS) to coordinate espionage activities behind enemy lines for all branches of the United States Armed Forces. Other OSS functions included the use of propaganda, subversion, and post-war planning. (Source)

Some notable documents from the CIA’s ‘OSS Collection’:

Activities in Italy; Hitler’s Correspondence With Mussolini; Plans For The Invasion Of Russia – 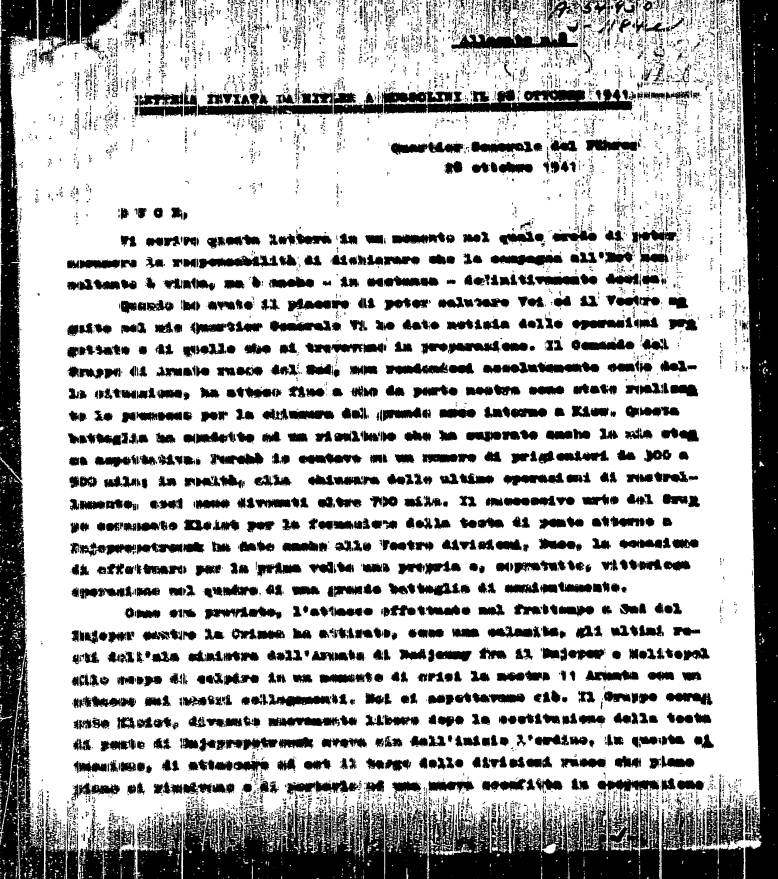 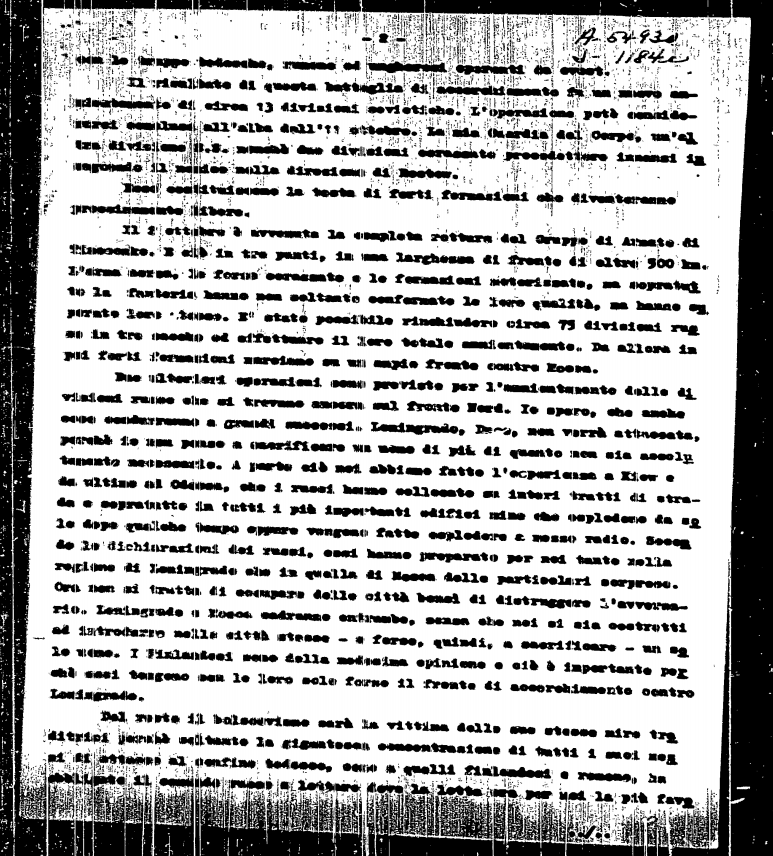 Correspondence / Proposal For Providing Sanctuary To Jewish Refugees In 1941 – 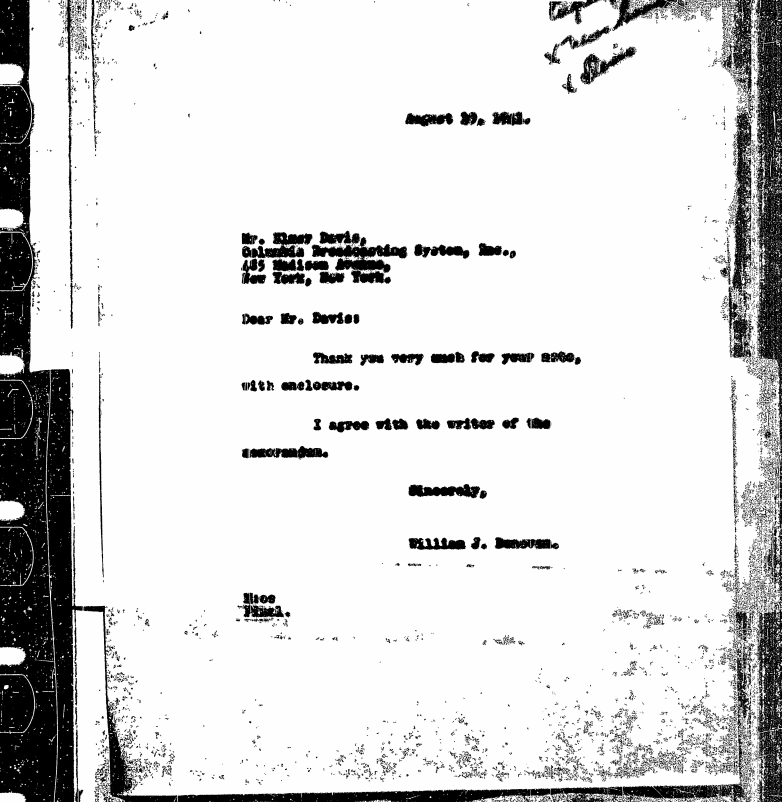 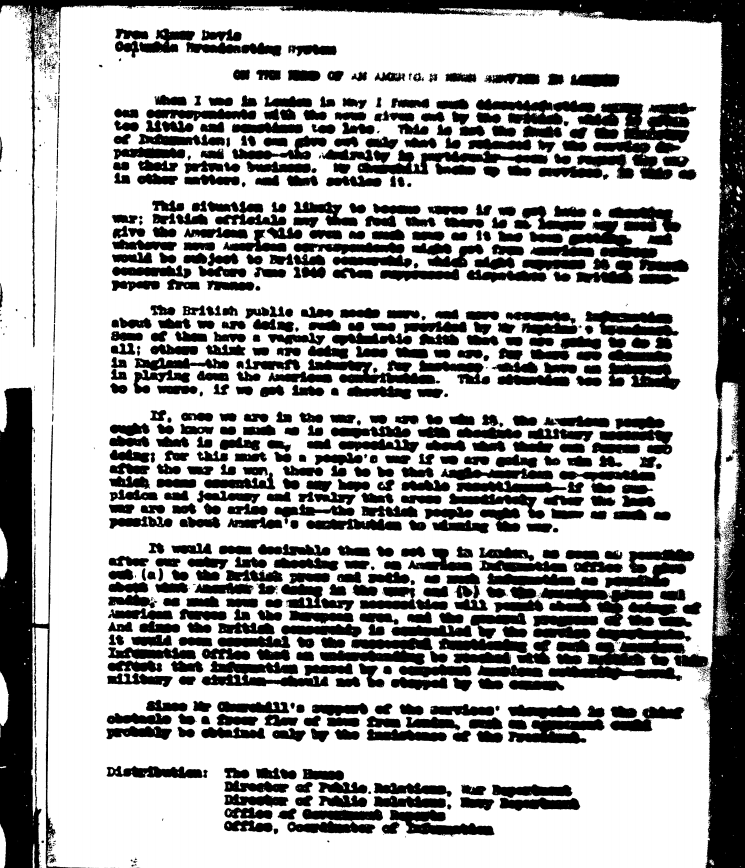 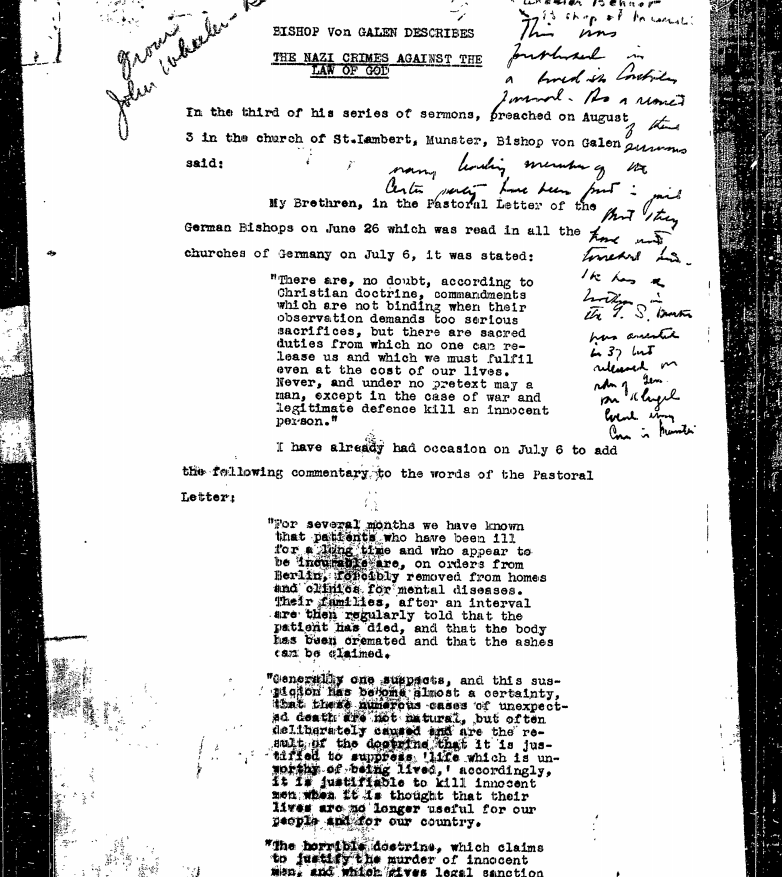 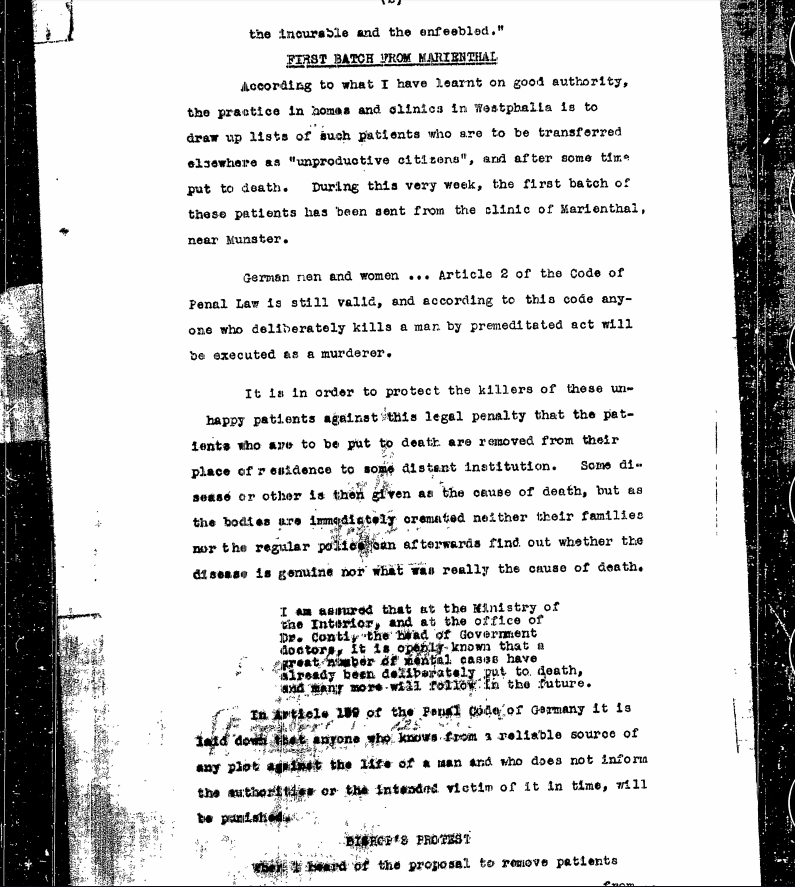 ‘STARGATE’ was another subject that piqued our interest. According to the Independent:

Project Star Gate, as it was known, was the codename for a US government project intended to use psychic and supernatural phenomenon for spying and military uses.

Some of the records/transcripts from STARGATE read as if they’re straight out of a sci-fi novel. Here is one example:

Dr. LaBerge: To be used as an R&D program rather than an intelligence program. The issue of the application is bound to drive, more probably drive us into difficulties. I think we should see whether or not things do exist to the degree — sort of taking it out of the intelligence area and saying it is an R&D issue, collection problem or not. It has caused Murphy to consider the issue a problem and he chose to bring the issue up. I check with Bill…

LTG Tighe: One of our problems is keeping track of the Russians. The R&D thing is attractive if you are really trying to lead toward that operational capability. Now the big question comes up — can whatever you do survive and treat this as a normal R&D program. It is my judgment that the Golden Fleece Award, and no matter who has it — I think the Golden Fleece Award comes from people being less than quiet in their profession.

Dr. LaBerge: I still hope we can keep Rose’s interest. We should try and keep Proxmire off our backs.

LTG Tighe: I have a feeling that we are going to have a difficult time keeping anything quiet long enough to do anything. The Army process ought to be working on intelligence-related matters anyway — only issue is whether it is intelligence per se, and I have only come to this conclusion because Dan seems to… One of the greatest tragedies of this whole thing is the development of to ‘spy without spying.’

Dr. Davis: The R&D aspects at the moment are what I would call primitive and naive — that if it came under R&D that it would have to be changed and many years before results could be seen. Work up until now has not been dishonest. Spoke with Perry and he wanted no part of it (only spoke to him for 15 minutes or so). The only point that I think is showing up anything is at the Fort Meade area where you have a bunch of military people, they are doing exactly what they are told. They don’t know anything about the great enthusiasm and the gee whiz part and they are doing it on a daily basis. Intelligence R&D is separate from R&D. We need the committee report next week… 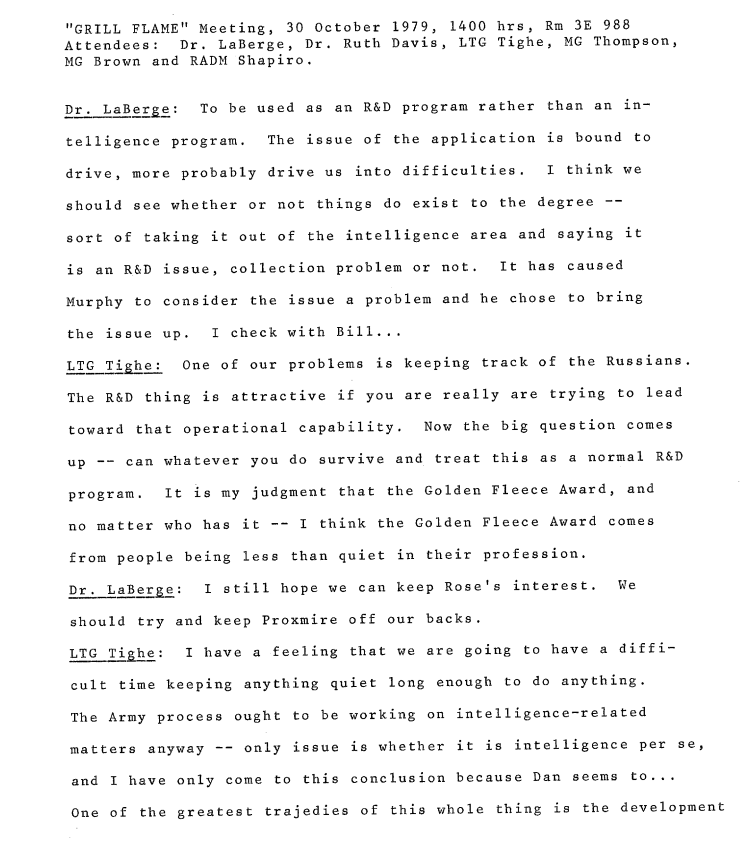 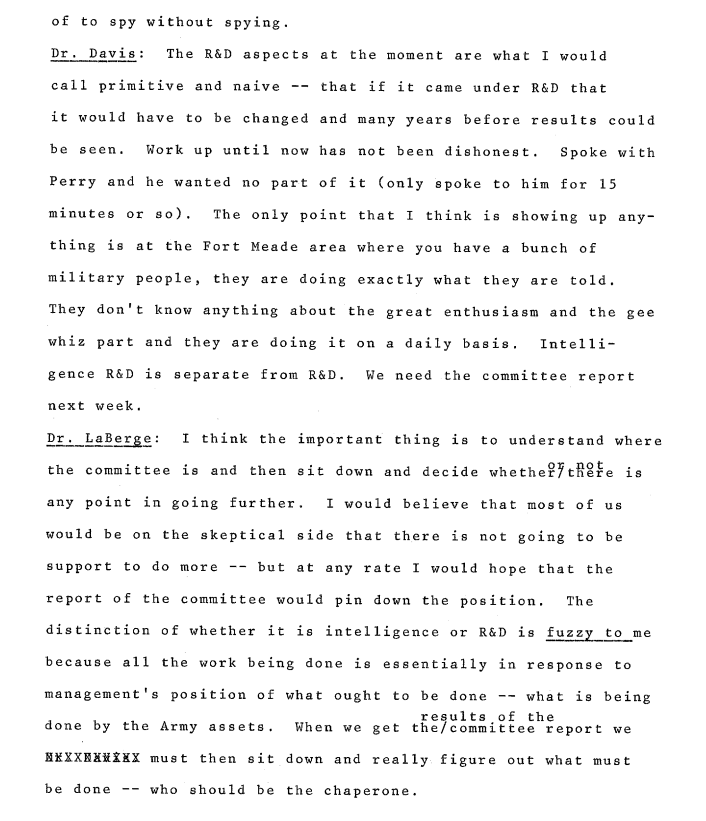 Here is a strange document simply titled ‘Other A Summary’ –

1. Source described site as an ‘official’ technical experiment. Site’s main component is very long, thin and raised. It is higher in the middle and lower to the sides (NFI). In cross section, it gives the impression of a ‘conduit’ for something. High levels of electromagnetic energy are essential to the site. Part (or all) of the conduit is composed of segments. There is a sense of very dense or heavy metal associated with the site, particularly in connection with the object discussed below.

2. A metallic, highly polished, bullet-shaped object, delivered to the site in a heavily reinforced shipping container, is placed at the (closed) end of the conduit. Within this object is a container holding a corrosive substance. The substance seems to be black in color while in the container but changes color (perhaps to gold) as it proceeds out of the container and on to the objective (NFI). (NOTE: Source could not determine if the metallic object, the substance it contained or something else was directed down the conduit).

3. The object of the experiment was to impact a rectangular target, (made up of a substance on a matrix), with at least one thing. To [ensure] this, several or many ‘things’ are projected at it. This action causes the target to become blackened, warped, pitted, eroded and scoured. After impact, the target is studied, examined and analyzed. 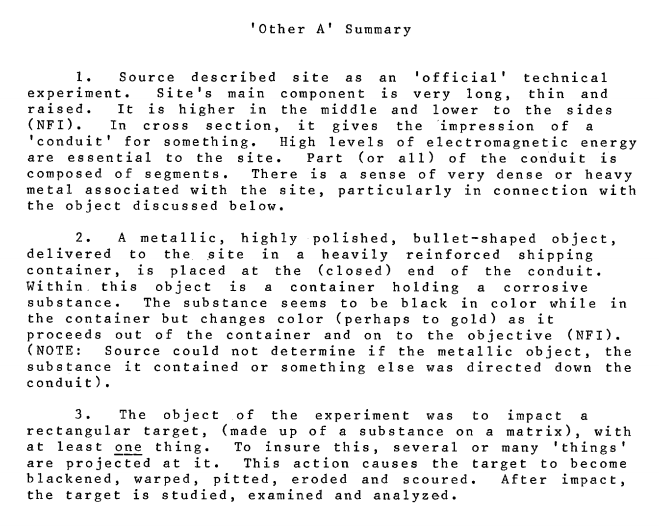 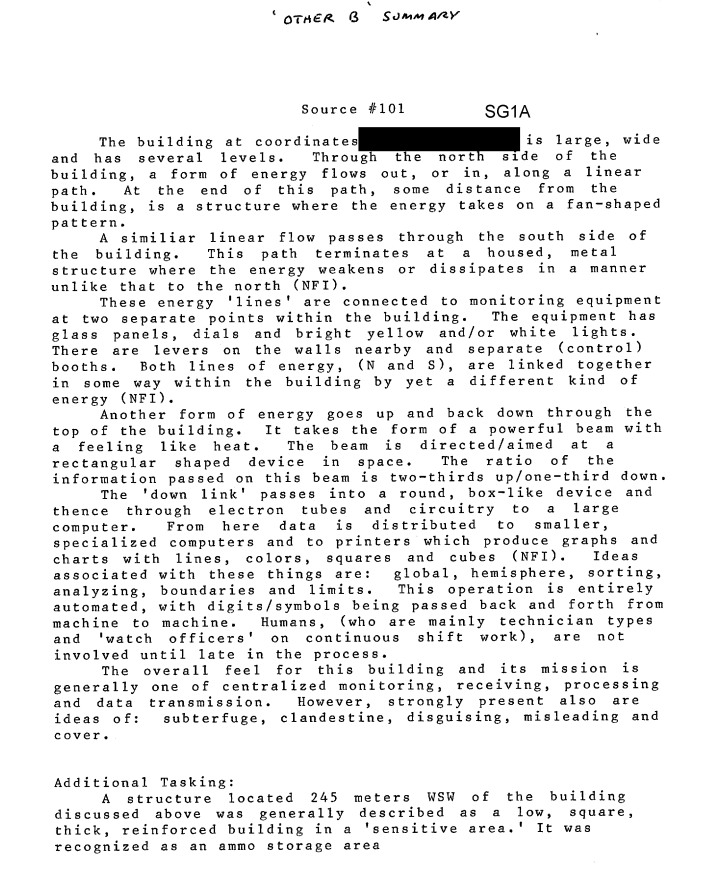 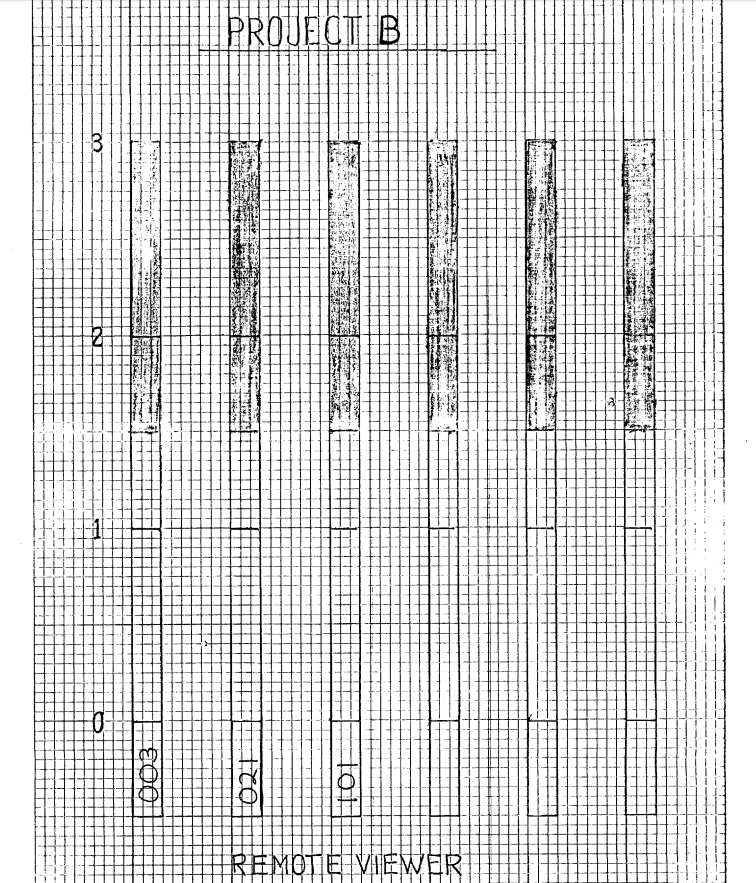 If you want to see more from the CREST archive, click here.

Published in Opinion, U.S. and Weird