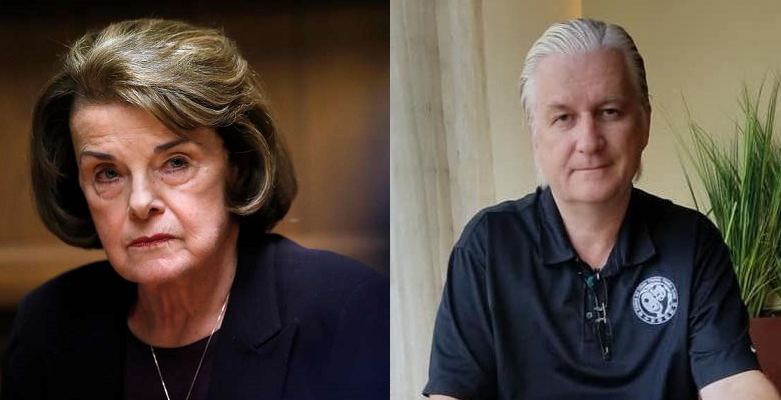 According to a U.S. Department of Justice press release:

Hansen retired from the U.S. Army as a Warrant Officer with a background in signals intelligence and human intelligence. He speaks fluent Mandarin-Chinese and Russian. DIA hired Hansen as a civilian intelligence case officer in 2006. Hansen held a Top Secret clearance for many years, and signed several non-disclosure agreements during his tenure at DIA and as a government contractor.

Feinstein later disclosed she was notified by the FBI five years prior that a staff member in California was “potentially being sought out by the Chinese government to provide information.”

The senator said in a statement that “he was not a mole or a spy, but someone who a foreign intelligence service thought it could recruit.”

“The FBI reviewed the matter, shared its concerns with me, and the employee immediately left my office. The FBI never informed me of any compromise of national security information,” she said.

As a chairwoman on the Senate Select Committee on Intelligence from 2009 to 2015, Feinstein had access to the intelligence community’s most sensitive secrets, which included clandestine spying operations, covert action programs and other secret intelligence operations.

Although the Democratic senator did not give away the identity of her staff member, The Daily Caller reportedly obtained his name:

“…The person sought out by the Chinese likely was Russell Lowe, a Chinese-American who worked for Ms. Feinstein for 20 years and served as liaison to San Francisco’s large Asian-American community.”

Sources close to both Sen. Dianne Feinstein and Ron Rockwell Hansen’s cases claim Hansen may have worked directly for or with the senator and her staff, including Russell Lowe.

Other spies, such as former CIA officer Kevin Mallory, who was charged and convicted of conspiracy to commit espionage in attempting to sell secrets to China, and Jerry Chun Shing Lee, who was also arrested on spy charges, may have all collaborated together in a vast Chinese intelligence “spy network” that still operates to this day.

Jeffrey Harp, a former FBI special agent who specialized in counter-espionage, said investigations like the one involving Feinstein’s staff member are “difficult and very complicated.”

“Sometimes the endgame is not prosecution but disruption,” he commented.

The Washington Times reported that Chinese intelligence has targeted high-technology secrets from Silicon Valley and is engaged in covert operations to influence Americans, especially ethnic Chinese-Americans, to support China’s policies and views.

In an August, 2018 interview, Harp said, “They always have their tentacles into the community, not only for secrets but for political influence.”

Last year, Feinstein and her staff were accused of leaking to the press a confidential letter from one of Supreme Court Justice Brett Kavanaugh’s accusers, Christine Blasey Ford.

When confronted about it by a fellow senator during the controversial Kavanaugh confirmation hearing, Feinstein seemed befuddled:

Considering her past actions and behavior, is it too much of a stretch to believe the senator herself might also be directly involved in providing China with sensitive information?

After all, Feinstein is the second-wealthiest serving senator with a net worth estimated to be around $94 million!

Published in Conspiracy, Crime and Opinion