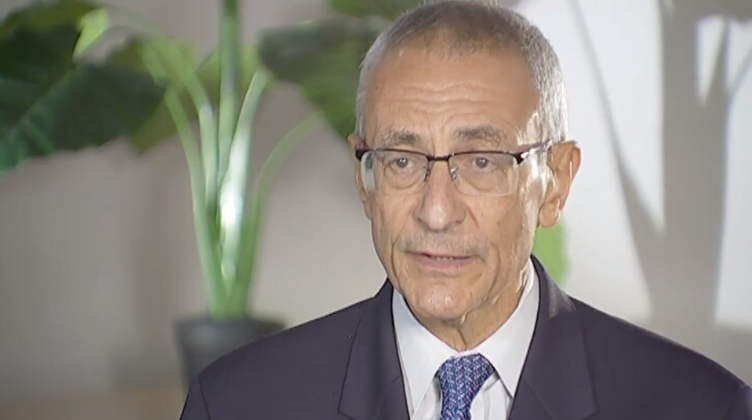 John Podesta, the former chief of staff for President Bill Clinton, acting counselor to President Barack Obama and campaign manager for Hillary Clinton’s 2016 presidential run, was in New Zealand on March 10, 2019 for a ‘Global Progressives Event.’

It is unknown how long Podesta was in NZ, but days later on March 15, terror suspect Brenton Tarrant, an Australian native, carried out attacks on two mosques in Christchurch, resulting in the deaths of at least 50 people and injuring dozens more.

Tarrant reportedly live streamed the massacres with a GoPro camera. Videos of the tragic event circulated online for a short time until search engines and social media platforms cracked down and eventually removed most of them.

According to Zero Hedge, New Zealand authorities recently warned its citizens that they will face up to 10 years in prison for “knowingly” possessing a copy of the New Zealand mosque shooting video – and up to 14 years in prison for sharing it. Corporations (such as web hosts) face an additional $200,000 ($137,000 US) fine under the same law.

Newshub reports John Podesta visited New Zealand to warn the government about a “serious risk” of major cyber attacks against its infrastructure by both Russia and China.

Coincidentally enough, during the 2016 presidential election, tens of thousands of Podesta’s emails were hacked by foreign entities and exposed to the public through WikiLeaks.

Some believe the hack was a major factor in Hillary Clinton’s loss to current U.S. President Donald Trump.

In a discussion at the Global Progressives Event, Podesta revealed his opinion about the hacks and Trump’s alleged (and unproven) connection to Russia.

“Vladimir Putin must be sitting in the Kremlin saying this is the best return on investment I ever got – I’ve got a pliant president of the United States,” he said.

“I don’t see why they couldn’t do it. And there are other state actors as well.

“There are other actors in the region including China that may have a high degree of interest in being able to penetrate what the private conversations of people in NZ politics and NZ Government are looking at.”

The ‘Five Eyes Spy Network,’ which includes New Zealand, the U.S., UK, Canada and Australia, is a “powerful intelligence club” that actively works to thwart attacks such as the ones that were discussed.

Podesta believes New Zealand is a “juicier target” because of the amount of fake news being propagated within the country.

“What’s new is this weaponisation – the use of social media to spread discord, lies, dissatisfaction – that’s I think what you’ve got to look out for,” he said.

According to Newshub, Podesta played a starring role in one of the great conspiracy theories of the [2016] election – his hacked emails included an exchange about a Washington, DC pizza joint called Comet Ping Pong. The theory eventually became known as pizzagate.

UPDATE: This is probably just a coincidence, but… 🤔

Published in Conspiracy, Politics and World