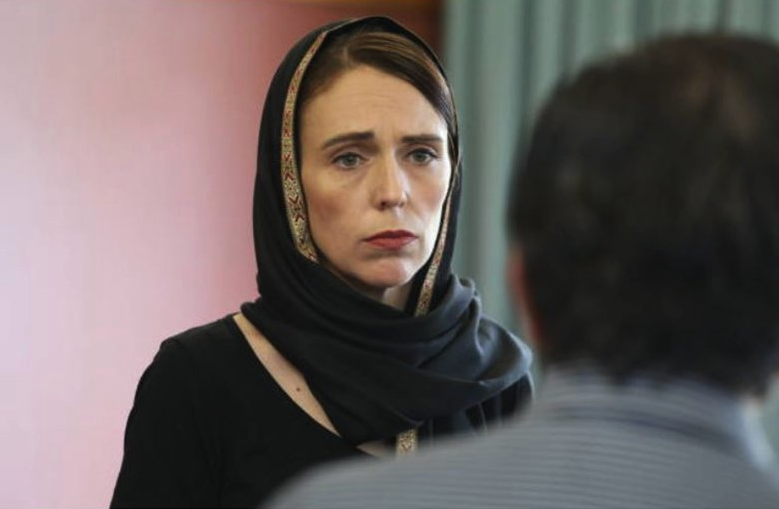 Prime Minister Jacinda Ardern announced New Zealand will broadcast the Muslim call to prayer across the nation on TV and radio Friday. That same day New Zealand women are being encouraged to wear the Islamic head covering on Friday in sympathy with Muslims in the wake of the mass shooting terror attack by white eco-nationalist Brenton Tarrant at two Christchurch mosques last Friday that killed 50 and wounded dozens.

New Zealand PM @jacindaardern announces 2 min. silence and broadcasting the Muslim Call to Prayer on Friday.
Exactly how you respond to hate: pic.twitter.com/lugcBM1L1f

#NewZealand Prime Minister Jacinda Ardern wore a hijab when she met with members of the #Muslim community in #Christchurch on March 16, 2019.
Getty Images pic.twitter.com/U38p4FkJ22

THIS FRIDAY, 22 March, you're invited to wear a headscarf or head covering at work, school, or play – to peacefully show your support for the New Zealand Muslim community at this time. #headscarfforharmony pic.twitter.com/geKkT1FExJ

The campaign to wear the hijab on Friday is calling it a headscarf and bears the name and hashtag #headscarfforharmony.

The idea was born out of reports Muslim women in New Zealand were expressing fear of wearing the hijab in public, reported the New Zealand news site Stuff:

…The idea came from Thaya Ashman, a Mt Eden GP, who has a long-standing affinity with Muslim communities since her time volunteering as a doctor in Afghanistan.

“I heard the story of a frightened woman hiding at home, too scared to go out onto the street as she felt her headscarf identified her as a target for terrorism. I wanted to say ‘we are with you, we want you to feel at home on your own streets, we love, support and respect you’.”

Representatives of the Muslim community have endorsed the idea and are deeply touched.

…Kiwis are encouraged to get together with friends and workmates, takes photos at work, school or play, and share it on social media with the hashtag #headscarfforharmony.