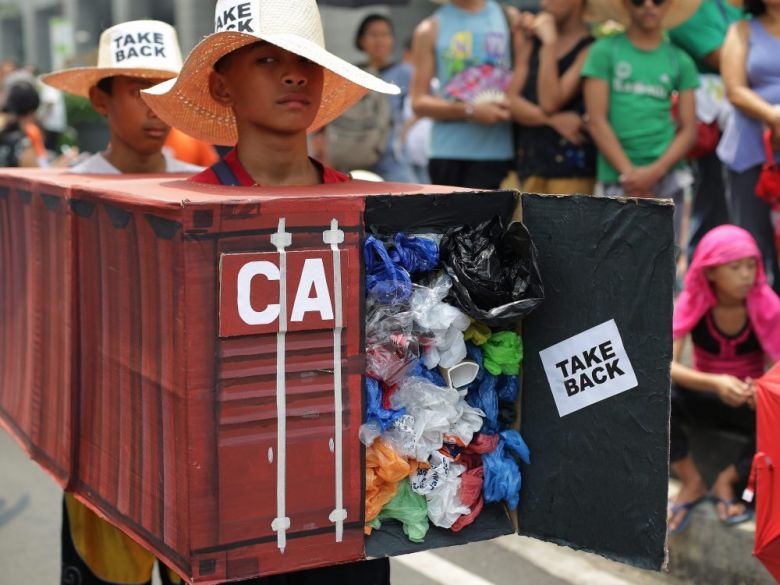 Philippines President Gives Canada A Week To Take Back Tonnes Of Trash, Or He Will ‘Declare War’ And Send It Back Himself

The president of the Philippines says if Canada doesn’t take back tonnes of trash within the next week he will “declare war” and ship the containers back himself.

Filipino media outlets report that Rodrigo Duterte made threats Tuesday about dozens of shipping containers filled with Canadian household and electronic garbage that has been rotting in a port near Manila for nearly six years.

“I want a boat prepared,” Duterte said. “I’ll give a warning to Canada maybe next week that they better pull that thing out or I will set sail.”

Duterte, who is known for his combativeness, threatened to declare war on Canada if the issue isn’t resolved.

“I will advise Canada that your garbage is on the way,” he said. “Prepare a grand reception. Eat it if you want to.”

In 2013 and 2014, a total of 103 shipping containers from Canada labelled as plastics arrived in the Philippines for recycling, but Filipino customs inspectors determined the containers were actually filled with debris from Canadian trash bins.

Canada has been trying for nearly six years to convince the Philippines to dispose of the garbage there even though a Filipino court ordered the trash returned to Canada in 2016.

Prime Minister Justin Trudeau was asked about the matter on trips to the Philippines in both 2015 and 2017. On the first visit he said Canada had no legal means to force the company that shipped the waste to take the trash back. In 2017 Trudeau said Canada was working very hard on a solution and that it was “theoretically” possible for Canada to take back the trash.