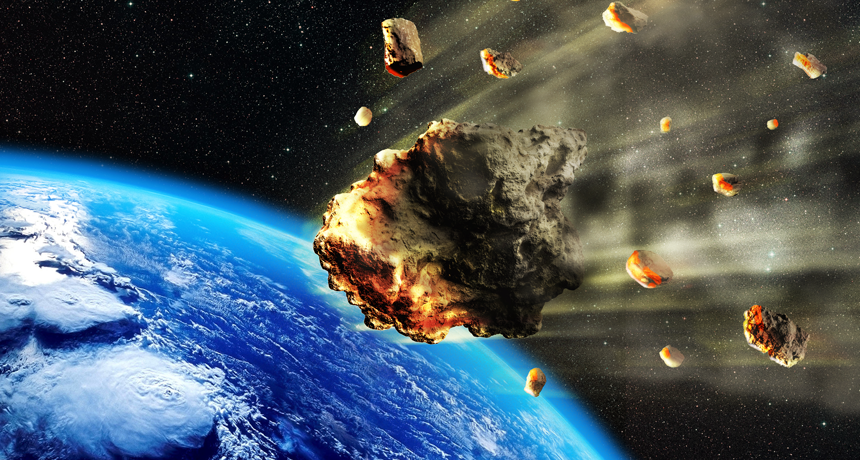 Whistleblower From RUAG, A Swiss Aerospace And Defense Company, Warns Of Impending Asteroid Impact That Will Affect Whole World

An engineer who allegedly works for Rüstungs Unternehmen Aktiengesellschaft (RUAG), a Swiss technology company, made quite a few online posts warning readers to immediately leave large cities because on May 6, 2019, “multiple large asteroids” will crash into Earth.

The original post is titled ‘HAPPENING NOT A DRILL, GET OUT OF THE CITY IF YOU WANT TO LIVE’ and starts off with the following message:

This is not a joke. I’m working for RUAG, a Swiss aerospace and defence company. I’m part of a team providing equipment and software to Government bodies.

Earth is about to get showered with multiple large asteroids. Every government knows about it. It’s a known open secret.

Warnings will cause a global panic and cause potentially more unnecessary deaths.

Get bottled water and canned food. And try to get as far as possible inland.

I can’t tell you where it’s the safest because I don’t know the final trajectory and impact zone. Impact zones [are] pretty much determined, but I don’t know them myself. I will go with my family into a remote ski area where we have a winter home.

Even if your city wont be affected by the asteroid, or tsunami or earthquake, cities are deathtraps because nobody has any supplies and no [supplies] will come at all. If you read any war diaries out of Russia, you will know that murder, raids and cannibalism are normal in a large city cut out from supplies.

Even if you aren’t in the blast zone, the tsunamis and quakes, ash cloud and food and electricity shortages will be insane.

They continued (*Note: Use common sense while reading their advice) –

0. Away from cities.
1. Away from the shore.
2. Away from active volcanoes; hills that can come crashing down on you, etc.
3. Away from nuclear reactors.

This is what will happen: asteroids will hit Earth. Multiple locations.

It will snow ashes, since tonnes of particles will be pushed into the atmosphere. Electricity will stop coming out of your wall, so will the water, then it can go two ways: either it will be managed decline and the military will take charge or it will be full blown panic and chaos and everyone will run to the stores and try to get supplies.

Chances are we are all pretty much f*cked. But now it all makes sense, why they let Detroit and the West fall apart and rot. It explains where all the trillions went. It explains the conspiracy theories about a breakaway civilization and a New World Order.

Ladies and gentleman, the new world will come, and it will be without us. Without most of us. Humanity will be so decimated, so few will survive.

It’s pretty much publicly disclosed if you can read between the lines.

When someone asked if their warning was real and not a joke, and whether Canada would be affected, they answered with this:

Do you have a vehicle, car, truck or something?

Get this sh*t and go camping. Don’t go alone; take the people you love with you. Stay away from the shores. Be at least at 500m above sea level. Check a topographical map.

Another person asked how long they had to prepare. The alleged whistleblower’s response:

Projected to [enter] Earth’s orbit the 6th of May.

Some users in the thread pointed out that NASA and FEMA will coincidentally be holding a “practice run” to “see what would happen if an asteroid hits the Earth.” They provided links to two articles; one from CNN and the other from Mashable:

So, are we about to experience a serious impact event early next month?

TCC Editor’s Note: We made some grammar and spelling adjustments while quoting the alleged whistleblower. You can read their full thread here.

UPDATE: Another “insider,” this time from NASA, recently warned of asteroid 1999 KW4 impacting Earth on May 25, 2019. Here is what they had to say:

I’m going to be as forthcoming as I possibly can. You need to stock up supplies now and find shelter underground. Now.

I work at NASA. Last year we started seeing anomalies with an increase in asteroids. One of them was KW4 and our projections saw that it would miss Earth. However, we were wrong. The reason why is because even with our brains and tech, space has a mind of its own. Gravity is unstable and can create a feedback loop that alters the calculations, so data has to be constantly updated. The sun has shot the asteroid way further than our original predictions. It is predicted to go in between the earth and the moon, which at that point would cause the asteroid to slam into Earth.

When we first got wind of KW4, that is when a few of our sister satellites were shut down last year. We were told it was because of a janitor was using the servers illegally, which is really bizarre, seeing as how the computers need custom assigned passwords/shit tons of security to even get into. I still don’t know the full story. Ever since then, we haven’t been running at full capacity and our data has been hampered/altered. It is still shut down.

We were told this yesterday. As a last attempt, we are attempting to divert the asteroid but we really don’t have the tech for that (media says we do, but we don’t). We have reached out to SpaceX as a last resort because of their re-usuable rockets and our limited time. Thanks to diversity hires, we are out of the needed brain power/ideas to execute this.

To calm the public, we are staging a “test” that would simulate an asteroid hit. There will be 1-3 tests, starting next week as a trial, and then more tests will occur the week of the expected impact.

Watch our podcast where we discuss the two alleged whistleblowers as well as the oddly timed asteroid-related “training scenarios” being conducted worldwide: