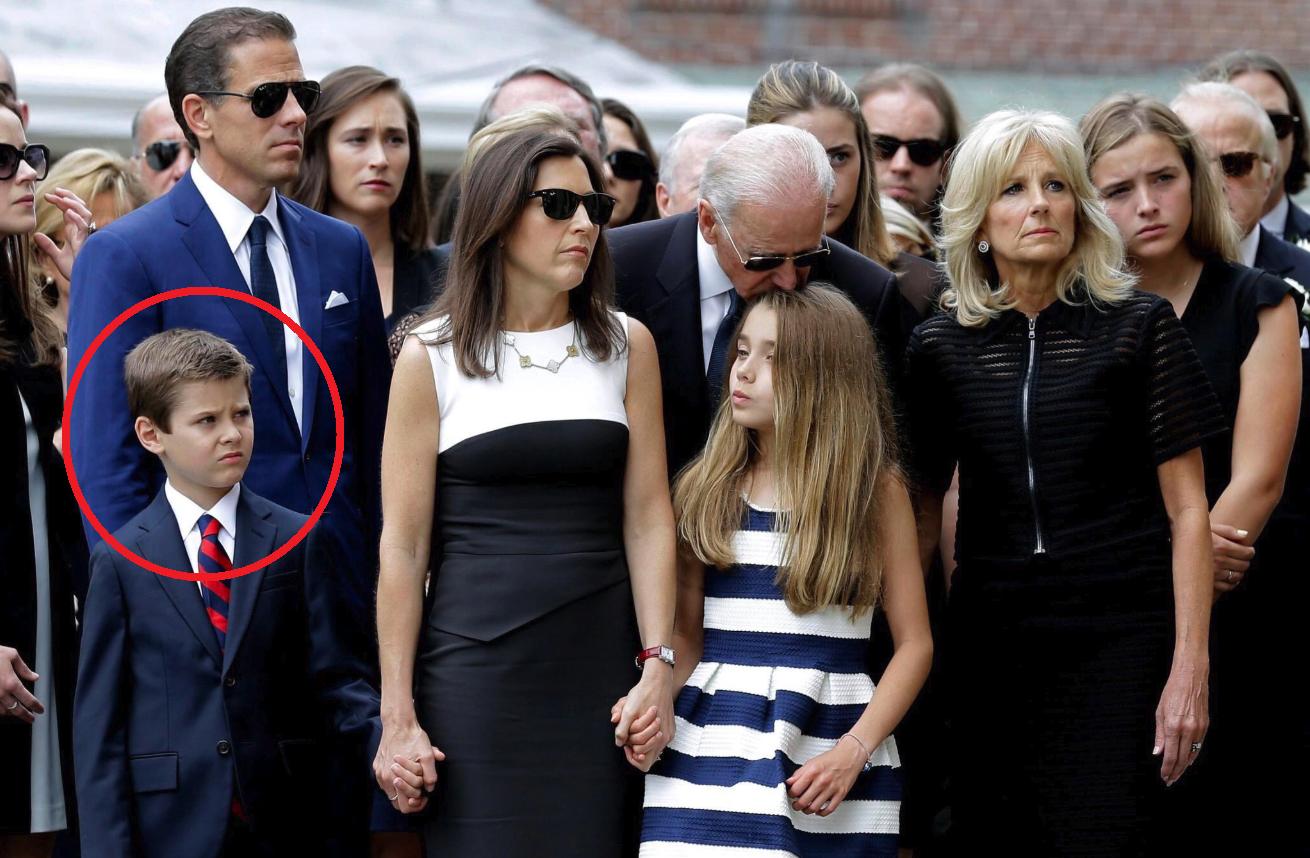 Warning: Some people may find the following content disturbing. Viewer discretion is advised.

Below, you will find a collection of about 40 videos documenting incidents where Biden acted inappropriately while mingling with both adults and children.

In this clip, former Vice President Biden uses a candid moment to fondle the chest area of a little girl – in front of her entire family. Her visible discomfort is extremely obvious.

If that wasn’t disturbing enough, in this clip, Biden not only touches a young woman but smells her hair, kisses her, whispering something into her ear, only to tell her “see you back home, I hope” after visibly creeping out her and who I assume is her mother.

As former VP, Biden had a habit of smelling the hair of women and (particularly) little girls. In this clip, he fixes the hair of a little girl, conveniently placing his hands near her chest area. Her and the other young girl beside her clearly seem uncomfortable by it all.

In this clip, Biden swears-in (R) Senator Jim Risch. During photographs, Biden touches Risch’s daughter, specifically asking to take a photo alone with her. You can hear Risch say “Dad’s going to stand pretty close.” (I wonder why?) Biden even jokes and says, “If I was young…”

In this clip at another swearing-in ceremony, former VP Biden starts strangely sniffing the hair of a very young girl (he just met) repeatedly, also kissing on her. This man clearly has no boundaries.

Biden almost always seems to immediately inquire about the age of the girls he meets during these ops. He also has a habit of creepily saying “no serious guys till you’re 31.” “Serious” guys? The way he handles young girls is discomforting to watch. You can see it on their faces.

In this clip, Biden grabs onto a little girl he just met, continuing to grab her with one hand as he uses his other to shake hands with those he’s being introduced to. Very awkward. He then starts stroking her face repeatedly.

A lot of the family members involved in these awkward moments don’t know how to respond to Joe Biden preying on their young female relatives. Jeff Sessions, however, knows exactly what to do. Watch as he swats Biden’s hand from touching his granddaughter. Wonder why he’d do that?

No woman is safe from Joe Biden’s creepy disposition. Not even Hillary Clinton herself. Watch as he awkwardly embraces her for a particularly long amount of time. She keeps patting his arm as a gesture to let go, but he refuses.

Former VP Joe Biden has a quote he tells practically every girl he met during those taped confirmation hearings. “No dating till you’re 30.” In this clip, he asks a little girl if she remembers what he told her the last time they interacted together. What do you think he said?

Think about it. “You’re turning 11. You’re beautiful. Just remember: No dates till you’re 30.” Is it a joke? A rule. A requirement. A demand? Why shouldn’t a young women be able to date until she’s well-past maturity? Former VP Biden has said it so much, a montage exists.

The footage from former Senator Kelly Ayotte’s swearing-in was one of the most awkward encounters. I’ve broken it into 2 parts. In this clip, Ayotte’s daughter Billy impatiently enters the staging area ahead of schedule. Former VP Biden notices. “Who’s that beautiful child?”

After strangely asking 6 y.o. Billy if she was 17, telling her she can do “whatever she wants,” former VP Biden proceeds to have an awkward exchange with Kelly, stroking Billy to the point it almost seems Kelly asks her son about the “cameras” intentionally. You decide.

One awkward moment after another. The mother’s discomfort is clearly noticeable when Biden meets and poses with the children in her family. She strangely asks if picture taking is over early. Biden tells the kids “keep the boys away from their sisters.” Sons called “protectors.”

In this exchange, Senator Sullivan himself wonders if the picture-taking (& likely Biden being around his kids) is over. During the picture-taking, Biden physical moves Sullivan’s daughter towards him, clutching onto her side. She even calls out for her father twice in confusion.

Visibly perturbed family members seem to be a running theme at these Biden led swear-ins. During this one, a family member almost looks as if she’s using the prop she’s holding to mask Biden’s roaming hands, which are on her younger female relative.

During this confirmation swear-in ceremony, the senator involved loudly (and intentionally?) reminds Biden of his position by saying “this is the Vice President of the United States.” Hair sniffing and eery whispers by Biden make an comeback in this clip.

In this clip, Senator Cantwell introduces former VP Biden to her nieces, who all look visibly uncomfortable in his presence. The former Vice President then says “it’s ripe” while whisper-speaking with Cantwell’s young nieces. What on earth does he mean by that?

In this clip filmed by a random Sacramento family, former Vice President Joe Biden repeats the “keep the boys away from your sister” line. Then he tells the family a strange story about how his daughter at “about age 12 & a half or 13”, “wakes up, there’s a snake in the bed.”

Observe everything Biden says or does that leads to an uncomfortable laugh from Senator Joni Ernst.

This next clip is truly disturbing. While posing for pictures during yet another filmed swearing-in ceremony, then-VP Biden sneakily touches the young girl wearing a pink bow, causing her to fidget and cross her arms, trying to get away. He insists on continuing to manhandle her.

Former Vice President Joe Biden literally cannot keep his hands off of women. Especially young ones. In this clip, he says his infamous line, “no dates till you’re 30.” Then he proceeds to make all of the women in the family uncomfortable with unnecessary touches and grabs.

This clip bothered me in so many different ways that I’m just going to leave you with the Biden quote that stood out the most: I remember last time I told you, “you couldn’t deny it.” Biden seems familiar with this Colorado politician’s younger daughters. Something’s not right.

In this clip, former VP Biden leads the swear-in of Sen. Rubio. Biden immediately starts in on Rubio’s wife, who awkwardly laughs his words off. He then asks Rubio’s daughter, “how old are you? 17 or 8?” Rubio doesn’t seem like he can get his kids away from Biden fast enough.

As soon as Biden notices a little girl at this particular confirmation swear-in, he instantly asks her to “stand right there.” As he grabs onto her, she clearly looks uncomfortable. Biden further advises that “you’ve got to be very patient. Fathers are hard to raise.” Why?

Former VP Biden typically made sure every little girl involved in a confirmation swear-in stood directly in front of him. He’d physically make sure they did. In this clip, he randomly tells a little girl “grandfathers are hard to raise. They’re very hard to raise.” Meaning?

The banter at this Biden led swear-in is particularly bothersome. Biden tells an “almost 11” year old girl “no dates till you’re 30” twice. The girl’s relative, a senator, looks at Biden & says “it might even be too late.” Biden laughs & says “I know.” About a 10 year old?

Does former VP Biden know how to talk to young girls about anything other than dating? In this clip, he says “no dates till you’re 30 years old” to a little girl and young woman multiple times. They both look visibly creeped out after he whispers something (inaudible) to them.

Is former VP Biden exchanging phone numbers with a young girl he’s seen conversing with in this clip recorded at a White House Correspondents Dinner? It sure looks like it. It also looks like an aide/SS tries to approach Biden to let him know it’s starting to raise suspicion.

Biden used to tell very awkward stories in public during his time in office. In this clip, he tells a classroom of kids “granddaughters always love their grandpops,” referring to a moment when his 17 year old granddaughter asked to hold his hand. He also sniffs a girl’s hair.

In this clip, former VP Biden touches Ted Cruz’s wife, Heidi, multiple times and it clearly seems to make her uncomfortable. He asks their then 4 and a half year old daughter if she’s 15. He picks up their youngest. Jokes with Cruz’s Mom that “this could hurt your reputation.”

The visible discomfort of Cruz’s oldest daughter shouldn’t be discounted. She was literally crying out to her mother, father and grandmother to be held. Her disabled grandmother who is blatantly wheelchair bound. Why do you think she was so scared?

The confirmation swearing-in ceremonies led by former Vice President Biden were almost always awkward. In this one, Biden tells a senator and his family “spread your legs, you’re going to be frisked,” making them all visibly uncomfortable.

In this clip, where Biden gets way too familiar with a 90 year old woman (who almost appears to call him out for it), the former Vice President randomly tells her the strangest personal detail: “In my house, there’s not a single woman older than any man. It’s a rule.” Meaning?

“You know what I tell my grandkids. Take care of your grandfather, OK? Your most important job…” Asks pair of teen siblings how old they are. Boy says 15, Biden replies “you’re getting old.” Looks at 15 year old girl and says “remember, no serious guys till you’re 30.” Why?

This clip’s about the uncomfortable demeanor of the parents. You can just see it on their faces. There’s even a moment where the Dad checks to see where Biden’s roaming hand is at, near his wife & baby. When the Sen. asks his family to take another picture, they seem bothered to.

In this clip, the wife of Maine Senator, Angus King, seems extremely off-put by former Vice President Biden’s flirtatious whispering and physical hold over her. Observe how she nervously says “okay” when Biden tells her “I’d rather you look at me, but you can look at him.”

“You’re beautiful. And so are you, child. Where’d you get those eyes?”

“I’ll tell you wherever you got them, I think I know where you got them. You’ve got to send a thank you note.”

The daughter of Ohio Senator Rob Portman, Sally, had awkward encounters with former Vice President Joe Biden BOTH TIMES her father was confirmed. By the second swearing-in, she’d learned what to expect, appearing to seek her brother’s closeness as protection from Biden’s grasp.

It's time to talk about former Vice President Joe Biden, the open sexual predator. A thread/moment…

The #BidenGropeTapes are comprised of clips sourced predominantly from C-SPAN/YouTube. NO CLIPS have been altered.

Clip of Biden telling “snake in the bed” story: https://t.co/H9F59jwRIx

Clip of Biden talking to elementary school about granddaughter: https://t.co/4ipCju23VD