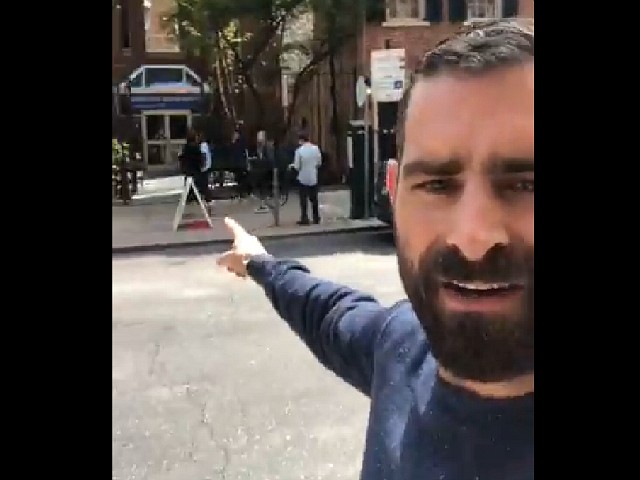 Representative Brian Sims (D-PA) recently confronted a pro-life mother and her two young daughters (13 and 15), as well as their friend, while they were praying outside a Pennsylvania Planned Parenthood clinic:

UPDATE: Watch PA Rep @BrianSimsPA offer up $100 for the identities & addresses of 3 TEENAGERS who are fighting for the lives of preborn children.

Ashley Garecht, the mother, told The Daily Caller Sims had approached her and the teenagers not just once, but twice. The first time, he did not have a camera but was “yelling pretty aggressively” at the girls. Garecht reported she had to repeatedly step in between the grown man and the teens in an attempt to deescalate the situation and tell him to stop.

The mother said, “We weren’t trying to talk to anyone coming in or out of the clinic. In candor, what concerned me was that he was yelling mostly at the girls.”

Sims then left the scene for about 10 minutes, but returned with a camera as Garecht and the three girls were preparing to leave. According to True Pundit, he then proceeded to film the girls and even encouraged his viewers to send him their personal information (i.e. doxxing):

“What we’ve got here is a bunch of pseudo-Christian protesters who’ve been out here shaming young girls for being here.

“So, here’s the deal, I’ve got $100 to anybody who will identify these three, and I will donate to Planned Parenthood.”

Sims, a self-proclaimed “LGBTQ activist,” “Ru Paul’s Drag Race fanatic” and “Little Mermaid enthusiast,” also harassed an elderly woman who was peacefully advocating for the lives of preborn humans and women who were considering having an abortion:

WATCH: Pennsylvania State Representative @BrianSimsPA harasses an elderly woman who is peacefully advocating for the lives of preborn human beings and women who are considering abortion.

After both verbal altercations, Sims took to Twitter and posted the following message:

“Bring it, Bible Bullies! You are bigots, sexists, and misogynists and I see right through your fake morals and your broken values.”

Bring it, Bible Bullies! You are bigots, sexists, and misogynists and I see right through your fake morals and your broken values. #BeReal https://t.co/kmDsrQsMmN

Live Action, an organization dedicated to bringing an end to abortion, is planning on fighting back against Sims’ behavior. They will be hosing a rally on Friday at 11am EST in Philadelphia:

This Friday at 11AM EST we will be holding a rally in Philly against the bullying, racism and violence of the abortion industry and @BrianSimsPA

You don’t want to miss it!