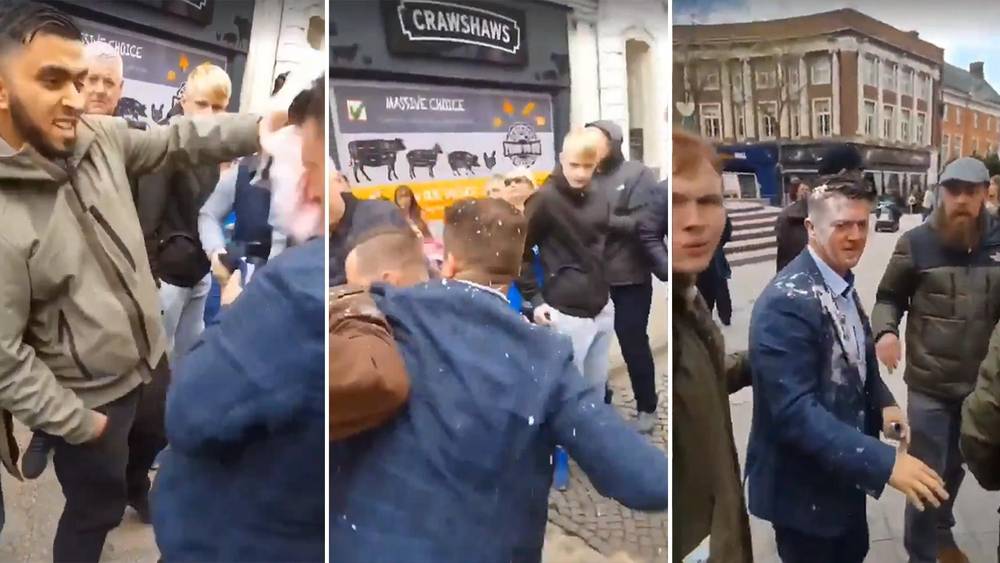 Did Burger King Just Use Twitter To Weaponize Milkshakes?

A little over two weeks ago, right wing political activist Tommy Robinson was attacked by a man holding a McDonald’s milkshake while speaking to a crowd in the United Kingdom. Watch below:

Watching this guy tip a McShake over Tommy Robinson is probably the most satisfying thing you’ll see all day pic.twitter.com/7YnDr88Qaq

Robinson had the same drink thrown over him just days later at another location.

On Saturday, two separate events were planned in the UK: Brexit Party Leader Nigel Farage was holding a rally in Edinburgh, Scotland and Tommy Robinson was hosting a campaign event in Oldham, England.

What was the major food chain suggesting, exactly? To utilize milkshakes as some sort of political tool?

Hours after their original tweet, Burger King seemed to somewhat backtrack by making this snarky remark:

So enjoy the weekend and please drink responsibly people.

Not surprisingly, the Daily Mail reported violence had broken out at Robinson’s event after supporters and “counter-demonstrators” clashed. Insults such as “racist scum” and “Nazi” were hurled at Robinson’s team, which may have led to the escalation. It is unknown at this time whether or not milkshakes were thrown around.

At least police in Edinburgh had the foresight to order a local McDonald’s restaurant to stop selling milkshakes ahead of Nigel Farage’s rally.

Police ordered a McDonald’s in Scotland to stop selling milkshakes over fears people would dunk them over Brexit campaigner Nigel Farage, staff said, after a flurry of incidents left prominent far-right activists doused in the creamy liquid.

Farage, the leader of the Brexit Party, was holding an event in Edinburgh ahead of next week’s European elections.

But police were concerned that protesters would buy milkshakes from a McDonald’s a few hundred meters away with the intention of pouring them on the hardline Brexiteer’s head.

“Twice now, while canvassing to become a Member of the European Parliament (MEP), Robinson has been doused with milkshake, as well as being throttled and manhandled, either by Muslim thugs or their hard-left allies of convenience.

“It has all been caught on camera so there is no disputing the facts: Robinson was not the aggressor; the attacks were unprovoked; it looks very much as though they were planned and calculated, rather than spur-of-the-moment acts by random passers-by.

“Yet the police appear to have done nothing to stop, let alone pursue or arrest, the perpetrators. And other Establishment figures who really should know better — among them a Tory MP and a barrister — have actually been applauding these attacks…

“What if next time, it’s not a milkshake that gets thrown but acid? What if it’s a knife attack?

“Once you start suggesting that physical assaults of any kind are acceptable then you are legitimising violence. And violence has a nasty habit of escalating.”

He has a point. Even though throwing a milkshake at someone might seem infantile, it still qualifies as assault.

And in this polarized political climate, violence of any kind will only escalate; it may have just been a pie to the face or a milkshake at first, but next time it might be something much, much worse.