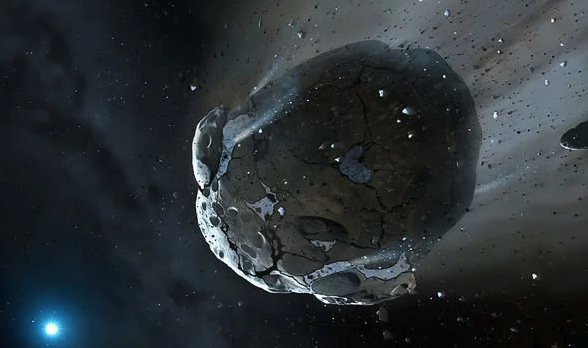 NASA: MILE-WIDE Asteroid With Its Own MINI MOON Set To Skim Earth

An asteroid binary first spotted 20 years ago will make another close encounter with Earth this week. US space agency NASA has been tracking the brace of space rocks, dubbed KW4. And grainy footage shows the asteroid growing steadily brighter as it approaches Earth ahead of its closest approach on May 25.

Although classified by NASA as technically “potentially hazardous,” asteroid 1999 KW4 will breeze by safely.

Asteroid 1999 KW4 is actually two objects, consisting of a larger space rock measuring 0.8 mile across (1.3km) and a mini moon orbiting it.

NASA explained: “The main body (primary) of 1999 KW4 is about 1300 meters across, but is actually quite a complex shape.”

“It is slightly squashed at the poles and with a mountain ridge around the equator, which runs all the way around the asteroid.

“This ridge gives the primary an appearance similar to a walnut or a spinning top.

“The secondary is about 500 meters across and the two asteroids orbit each other every 17.5 hours at a distance of about 1.6 miles.”

NASA has unveiled a pixilated low-res look at the asteroid ahead of its near-Earth approach.