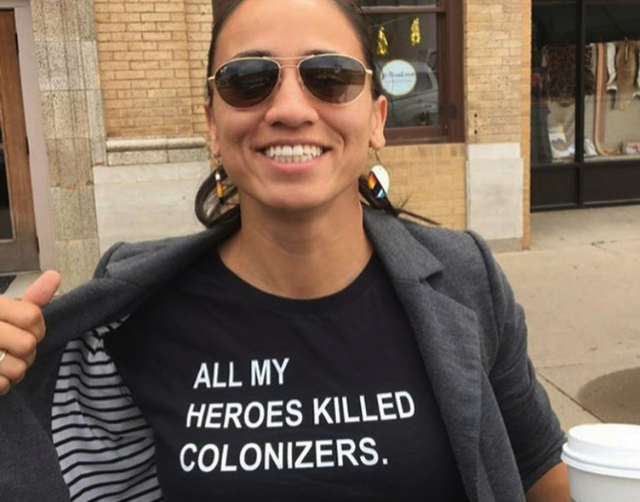 Congresswoman Sharice Lynnette Davids (D-KS) was recently seen “showing off” a shirt she was wearing that allegedly said the phrase “All my heroes killed colonizers.”

On Saturday, Twitter user @Likeshesays posted an image of Davids smiling for a photo while holding open her jacket and revealing the alleged controversial shirt.

“Congresswoman Sharice Davids (D-KS) proudly wearing a shirt saying: ‘ALL MY HEROES KILLED COLONIZERS.’ How are these people in congress?! Is it not hate speech to cheer murder of whites?”

Congresswoman Sharice Davids (D-KS) Proudly Wearing a Shirt Saying: "ALL MY HEROES KILLED COLONIZERS." How Are These People in Congress?! Is it not hate speech to cheer murder of whites? pic.twitter.com/YyBbvWEiSA

Reactions so far have been mostly negative. Here are just a few examples:

Do they hate America or what..

Is she trying to open old wounds?

If it weren’t for colonizers there would be no America as we know it. Humans inhabited North America after crossing the land bridge from Asia thousands of years ago, and the civilization was tribal, nomadic and agricultural. It remained that way until the 15th century.

Fruitcakes are coming out of the woodwork

This is the consequence of removing God from everywhere and everything.

Nonetheless, some users appeared to sympathize with Davids:

My Mohican nephews say they cheered for Sitting Bull v Custer… I can handle that. 😏

The “whites” murdered a hundred million people and you’re crying about a T-shirt. I’m sure you also cry about free speech. pic.twitter.com/F1BE1SddaA

Let us know what you think by leaving a comment below.