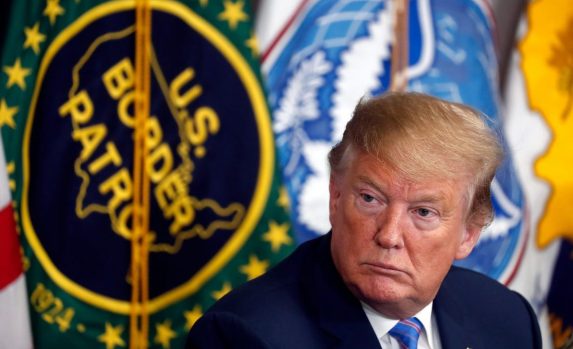 President Trump’s 2016 ‘Immigration Reform’ web page which was featured on donaldjtrump.com has mysteriously disappeared and now only shows the infamous 404 (page not found) error that says “Oops! This is awkward. You’re looking for something that doesn’t exist…” with the background image of Hillary Clinton holding a microphone while standing behind the presidential podium:

Thankfully, someone had the foresight to archive the original page. See below:

Then-candidate Trump’s immigration reform plan was quite detailed and explained exactly what was going to happen after he secured the presidency in 2016.

There was even a lengthy section titled ‘Make Mexico Pay For The Wall’:

Another section listed objectives such as:

Trump is now more than two years into his presidency. Has he actually upheld these promises?

We know for a fact that some of them are still in limbo. Here are just a couple of examples:

As for the others, we went ahead and dug a bit deeper into Trump’s official website and discovered a link that redirected to promiseskept.com.

There, a page titled ‘Immigration – President Donald J. Trump Achievements’ can be found:

After reading the full list, perhaps it is fair to say President Trump has so far done the best he can regarding the immigration crisis our country is facing.

Considering the constant bickering, resistance and obstacles thrown his way by globalist politicians who either only care about themselves and their careers, or are attempting to enact a much more sinister agenda, President Trump, through his actions, does seem to genuinely care about the safety, sovereignty and security of America.