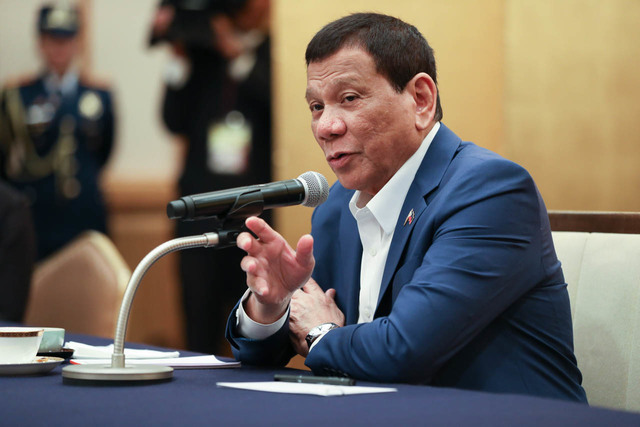 Philippines President Duterte: “I Used To Be Gay, But I Cured Myself”

During a speech in Tokyo, Japan on Thursday, Filipino President Rodrigo Duterte announced that he had “cured” himself of being gay.

Duterte elaborated and said he “became a man again” after meeting his former wife, Elizabeth Zimmerman.

The Philippines president also criticized Senator Antonio Trillanes IV, a frequent critic, and called him “gay” based on the way he moves, but added, “Trillanes and I are similar, but I cured myself,” according to Filipino news outlet Rappler.

Duterte finished his remarks on homosexuality by saying he has no issue with gay people:

While running for president, Duterte had embraced liberal views on Lesbian, Gay, Bisexual, and Transgender (LGBT) related subjects; even going to the extent of saying the Bible “should have recognized gays” alongside heterosexual genders.

After being elected, however, he reportedly reneged on his previous views and opinions on things such as same-sex marriage, which is a key issue for LGBT communities in the Philippines.

Rappler reports in March 2017, Duterte said marriage was only for a man and woman, under Philippine law. But by the end of the year, Duterte told an LGBT gathering that he thinks the law can be changed to allow same-sex marriage.

Duterte has also often used terms like “bakla” and “bayot,” words that mean gay, as insults to his political enemies. He has used those words to imply weakness in critics like Trillanes and former presidential candidate Mar Roxas.