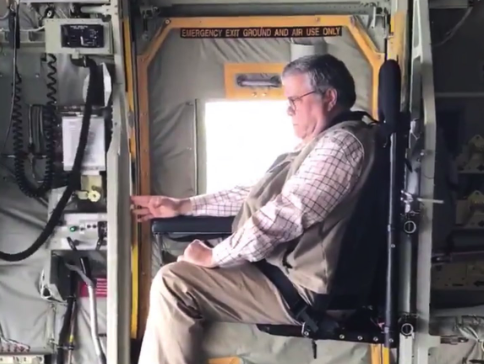 On Thursday, U.S. Attorney General William Barr chose to travel on a military transport plane to Alaska instead of using a civilian flight for a meeting with both politicians and Native American Leaders to discuss safety and law enforcement.

A seemingly “intense” moment during the trip was captured and shared on Twitter by Kerri Kupec, the director of public affairs for the DOJ.

Barr was seen strapped into a rear-facing seat as the cargo door was fully extended. The AG looked straight ahead and appeared to be admiring the majestic backdrop of the Alaskan countryside, including snow-capped mountain peaks.

“Sometimes plans change and you have to take a military transport plane to your next round-table discussion. Thanks for the lift, @AKNationalGuard! #AdventuresWithAGBarr @TheJusticeDept”

Sometimes plans change and you have to take a military transport plane to your next round-table discussion. Thanks for the lift, @AKNationalGuard! #AdventuresWithAGBarr @TheJusticeDept pic.twitter.com/C46S97Y61T

Some on social media enjoyed the short clip:

More than a little jealous of that legroom, to be honest.

The flight where no one needs to tell you to strap in.

Really cool, would love to join him!

Why does it look like Barr is trying to move that mountain with his mind? 😂

One person on YouTube thought it was the perfect opportunity to add the song ‘The Valkyrie – Ride of the Valkyries’ by Richard Wagner. He named the video ‘Bill Barr of the Valkyrie.’