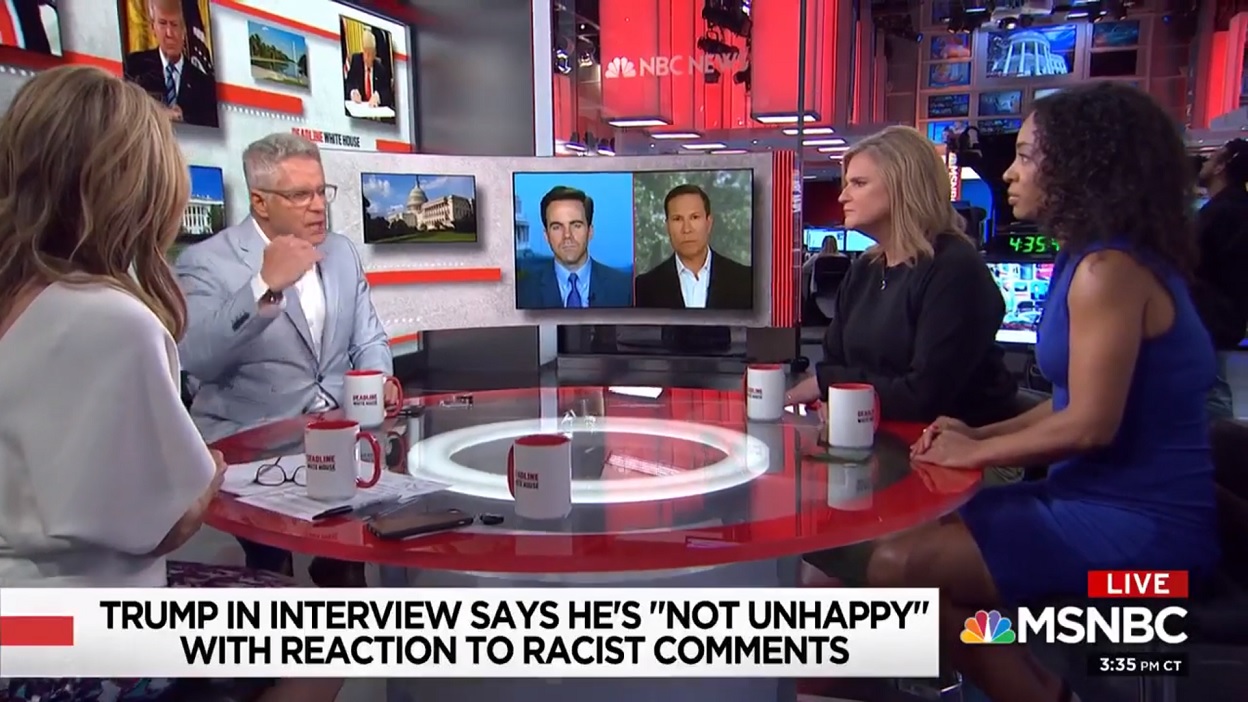 During a round table discussion on MSNBC last week, Donny Deutsch, the host of Saturday Night Politics, claimed that “every single playbook” from President Donald Trump suggests another Holocaust is coming.

The rant came shortly after Trump’s widely criticized tweets that told a small group of freshman Democrats to “go back and help fix the totally broken and crime infested places from which they came.” The representatives included Ilhan Omar (D-MN), Alexandria Ocasio-Cortez (D-NY), Rashida Tlaib (D-MI) and Ayanna Pressley (D-MA).

So interesting to see “Progressive” Democrat Congresswomen, who originally came from countries whose governments are a complete and total catastrophe, the worst, most corrupt and inept anywhere in the world (if they even have a functioning government at all), now loudly……

….and viciously telling the people of the United States, the greatest and most powerful Nation on earth, how our government is to be run. Why don’t they go back and help fix the totally broken and crime infested places from which they came. Then come back and show us how….

….it is done. These places need your help badly, you can’t leave fast enough. I’m sure that Nancy Pelosi would be very happy to quickly work out free travel arrangements!

“If you are on a subway train, and you saw four White nationalists screaming at an African-American woman ‘go home, go back where you came from.’ If you vote for Trump, it’s like you’re going like this.

“We are heading to such a dangerous place, and guess what? You look at history, it can happen here. Maybe it’s the Jews next. Oh, oh, I forgot, his daughter is married to a Jew. Who says — and I come from a place, a group of people where it happened to, six million of them, and I’m not saying Trump is that person.

“But every playbook that’s happening, every single playbook, creating the other. Getting rich people to look the other way. Getting people to not trust the press. Getting the judicial system in your pocket. Getting an entire branch of government, the legislative branch, the Republicans to just march with you. To act above the law. To say that you’re going to put your adversaries in jail.”

Deutsch added it is time for Whites to “look at their children and decide who they were.”

The Washington Free Beacon reports Nicolle Wallace, the host of Deadline: White House where the discussion took place, oftentimes flatters her guests as some of her “favorite reporters and friends” and frequently laughs along with and gushes over their progressive points. When Deutsch was making his point, however, she visibly frowned and quickly moved on to another guest.