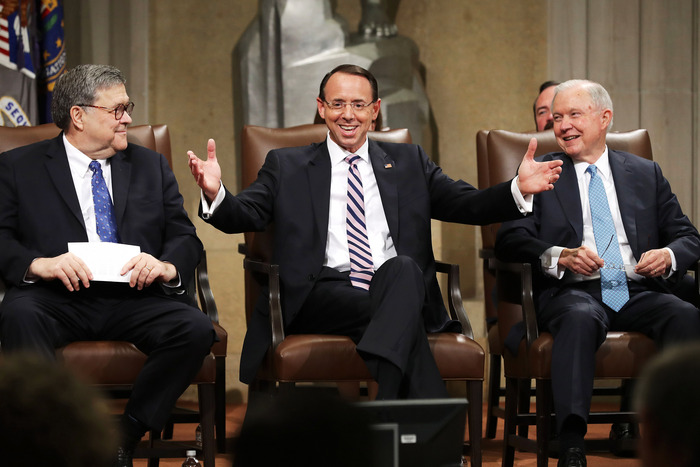 Rod Rosenstein Posts Cryptic Message On Twitter: “Things Are Not Always What They Seem”

Early Tuesday morning, former Deputy Attorney General Rod Rosenstein took to social media and replied to a tweet from Eli Yokley, a political reporter from the Morning Consult. In his message, Yokley pointed out how Rosenstein attended Harvard Law School alongside Anthony Scaramucci:

“Things are not always what they seem; the first appearance deceives many; the intelligence of a few perceives what has been carefully hidden.” – Phaedrus (Plato)

“Things are not always what they seem; the first appearance deceives many; the intelligence of a few perceives what has been carefully hidden.” – Phaedrus (Plato)

While the former deputy attorney general’s tweet could be interpreted as cryptic at first glance, it is important to note he has a (short) history of throwing out random quotes from well-known figures:

"Let us at all times remember that all American citizens [share] a common country, and should dwell together in the bonds of fraternal feeling." Abraham Lincoln (1860). Happy #IndependenceDay

Rosenstein’s profile bio even features a quote from Thomas Jefferson:

While his account only has around a dozen tweets, Rosenstein may have become more active on social media recently in anticipation of former FBI Director and Special Counsel Robert Mueller’s testimony before the House Judiciary Committee and House Intelligence Committee on Wednesday.

Mueller will be speaking before the House Judiciary Committee at 8:30 a.m. until approximately 11:30 a.m. His testimony before the Intelligence Committee will be at 12 p.m. and is scheduled to last for two hours.

The former special counsel will be questioned by 41 members of the Judiciary Committee. Judiciary Chairman Rep. Jerry Nadler, D-N.Y., on Sunday said he expects Muller to air “very substantial evidence” of wrongdoing by Trump, as Democrats continue to find a case for impeachment against Trump.