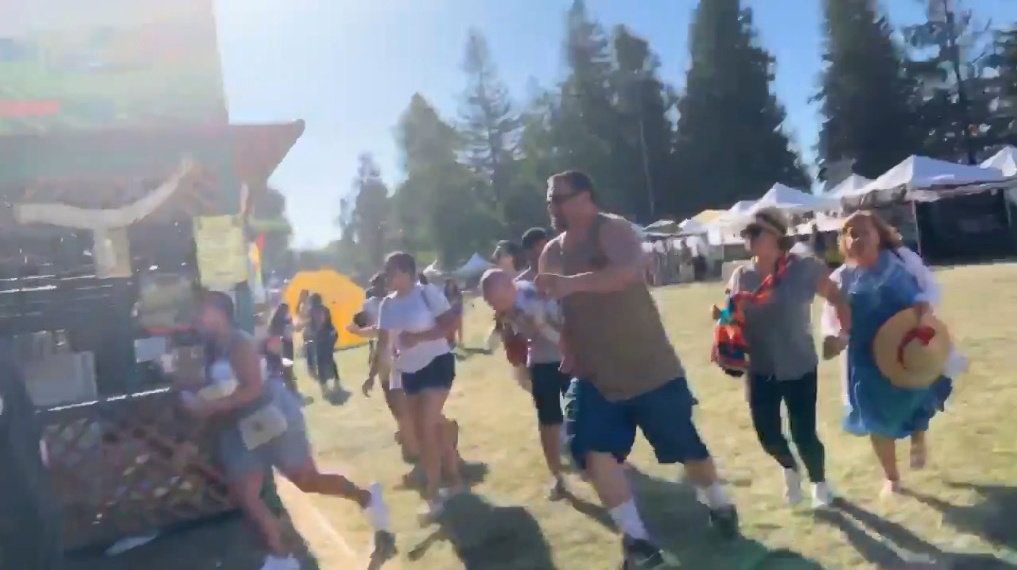 On Sunday evening, a gunman who was reportedly dressed in camouflage fatigues and armed with a rifle opened fire at the Gilroy Garlic Festival in California, sending hundreds of terrified visitors running for their lives.

According to the Gilroy Police Department, the scene was still active as of 8:34pm Pacific:

The hearts of Gilroy PD and entire community go out to the victims of today's shooting at the Garlic Festival. The scene is still active. If you are looking for a loved one, please go to the reunification center at Gavilan College at parking lot B. #GilroyActiveshooter

As a reminder please do not come to Christmas Hill Park, this is still an active crime scene.
We will be sharing information with the media soon and thank you for your patience during this rapidly evolving situation. #GilroyActiveShooter

NBC News reports at least three people have been killed and there was no immediate indication that a suspect was in custody.

11 people were transported to two hospitals in fair to critical condition after the shooting at one of the largest food festivals in the United States, said Joy Alexiou, a spokeswoman for the Santa Clara Valley Public Health System. Gilroy City Council member Dion Bracco and a law enforcement official familiar with the investigation told NBC News that three people had been pronounced dead.

“you ARE going to the Gilroy Garlic Festival, right /pol/? You can buy both garlic and onions by the bucket. There will be more testosterone in a single hour of this event than the rest of the g*y area.”

Many are speculating this tragic shooting may have been a false flag event to either frame and/or shutdown 4chan’s /pol/ (Politically Incorrect) board or distract from another major news story.

“They’re trying to frame us,” one user wrote.

Another said, “Why does no one care about the fact that an anon posted [this message] BEFORE the shooting?”

Here are a few more comments:

“So, how hard are they trying to get us shut down eh? They’re willing to kill people to get it done…that’s how much damage we do to their ’cause.'”

“This is a false flag attack to distract us from big news / leaks tomorrow or this week.”

Some even pointed out how there seemed to be a pre-planned “propaganda” message that was posted shortly after the shooting occurred which was directed to journalists and claimed the “kids” who used /pol/ were radicalized by popular video games. View an archived version of that message here.

Others noticed a strange new trend of users (or shills, as they call them) saying the archive link to 4plebs, and even various image files, contain viruses:

“Shills are attempting to say this link is infected. This was posted one day before the shooting. This is a false flag operation. Do not let it slide. It is not [an] ‘infected link.’ Don’t let the shills scrub this.”

We scanned the 4plebs URL using Virus Total and confirmed it comes back clean.

UPDATE #1: Watch the press conference below –

If you were a witness to the #GilroyActiveShooter and have not yet talked to police, please call 408-846-0583. You can also go the Gilroy Police Department right now and give your statement to an officer. Please only direct witnesses who saw something.

UPDATE #4: On Monday, the Los Angeles Times reported the following about the suspect’s identity –

A law enforcement source identified the suspect as Santino William Legan, 19. The mass shooting Sunday killed three and injured 12. Police killed the gunman after the rampage. Police searched a house linked to Legan at the end of a quiet suburban cul de sac in Gilroy.

The source said police were still trying to determine a motive for the attack, adding detectives were digging into his social media for indications of his belief system and opinions.

Published in Conspiracy and Crime