During the past 24 hours, some online users have apparently searched for the obituary of Connor Betts, the alleged Dayton, Ohio gunman who killed nine, including his sister Megan Betts, and injured many more early Sunday morning.

As of 9:45pm Pacific on August 4, Google’s search prediction algorithm lists ‘Connor Betts obituary’ as the second result when simply searching for the name ‘Connor Betts’: 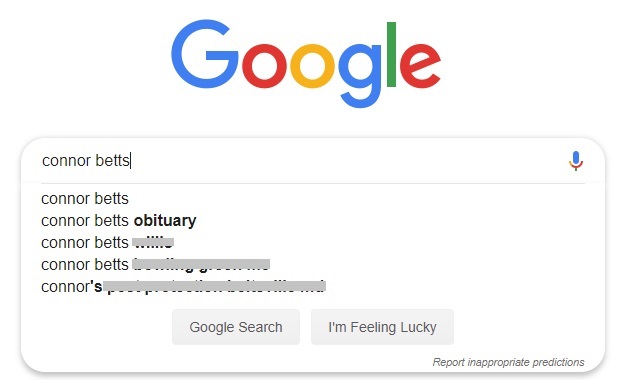 While viewing the search term in Google trends, you can see an increase in activity starting at around 7:00am Pacific on Sunday morning:

It discusses an obituary of a man named Connor D. Betts who died in 2014 in Suffield, Connecticut.

The obituary is located on Legacy.com and is publicly available to view:

The information itself was reportedly first published in The Hartford Courant on February 23, 2014.

Interestingly enough, the name Megan Betts, who was one of the victims in the Dayton shooting, is listed as a sibling in the obituary from five years ago:

James LaPorta, a reporter from Newsweek, took to Twitter and attempted to debunk the claim that the man in the obituary was the same person as the alleged shooter, citing differences in their middle names and birth years:

The suspected shooter, identified by police as 24-year-old Connor Stephen Betts, allegedly carried out the massacre with a .223-caliber rifle that he legally purchased and had two drum magazines that had 100 rounds of ammunition combined, Dayton Police Chief Richard Biehl said at a news conference Sunday afternoon.

But you mean to tell me they both have a sister named Megan? Eh… not really buying that one. Just a little too much of a coincident. And the fact that both pics look so much alike! pic.twitter.com/pBaD8c0auL

Sounds like they got the reprogramming and new identity done in 5 years.

Thanks for clarifying. It is odd though they both have a sister Megan and bare a resemblance.

According to Carbon Dating the Web, a Norfolk, VA university website that computes the creation date of any webpage, that page was created today. pic.twitter.com/gjM4iC4r2o

We ran a custom search string on Google. Here are the results –

Yes, same first and last but different middle name and birthdates. The Megan Betts killed during Sunday’s shooting is more than ten-years younger than the one mentioned in the 2014 obit I.E. not the same person.

To be clear folks. This is two men. Both named Connor Betts. They have different middle initials. They are NOT the same person. They died 5 years apart. The fact they BOTH had a sister named Megan is spoopy for sure, but that’s it.

I posted this to clarify.

Did the Suspected Dayton Mass Shooter Actually Die in 2014?

No, the Dayton shooting suspect didn’t die in 2014