On Saturday, Blizzard Entertainment’s World of Warcraft Classic servers suffered from continuous crashes, resulting in hundreds of thousands of players being unable to login and play their favorite MMORPG.

A user on Twitter, who goes by the handle @UkDrillas, openly bragged about targeting the servers: 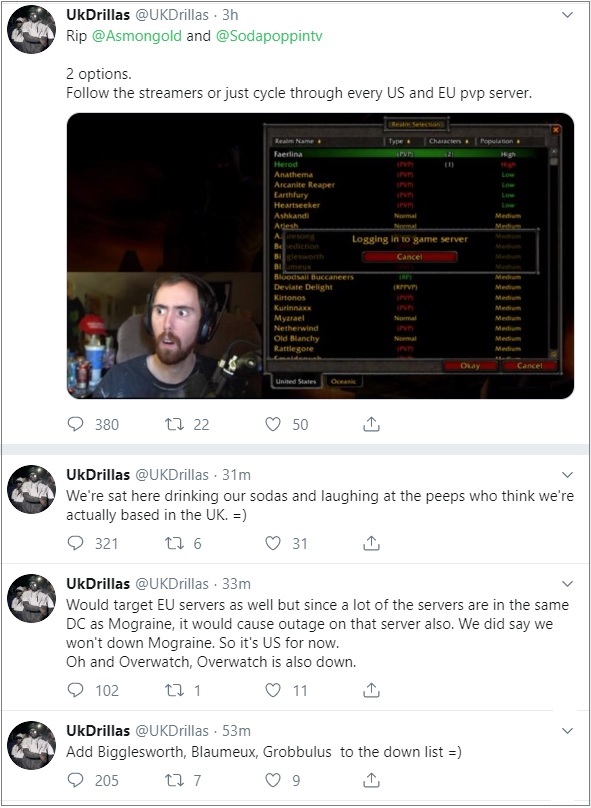 The hacker most likely used an attack called Distributed Denial of Service (DDoS).

DDoS is a type of DOS attack where multiple compromised systems, which are often infected with a Trojan, are used to target a single system causing a Denial of Service (DoS) attack. Victims of a DDoS attack consist of both the end targeted system and all systems maliciously used and controlled by the hacker in the distributed attack. –Webopedia

UkDrillas’ motives are unknown, but some have speculated they are not a fan of popular WoW streamers, such as Asmongold and Sodapoppin, since they pinned a tweet mentioning their names and announced “RIP” (rest in peace).

Last year, the BBC published an article about a gamer who used similar methods to take down World of Warcraft servers. The man, who is named Calin Mateias, was extradited from Romania to the U.S. and charged with “causing damage to a protected computer.” He ended up serving one year in prison and paying a whopping $29,987.

This most recent attack, however, may result in heftier fines and jail time since it affected multiple servers and even other games.

As of 1:00pm Pacific on Saturday, Blizzard has yet to make an announcement regarding the DDoS attack on either their official forums or Twitter.

Some online services continue to be impacted by a series of DDoS attacks which are resulting in high latency and disconnections. These disruption effects have been felt by a portion of our players, impacting their gaming experience. Thank you again for your continued patience.

UPDATE #3: Although the DDoS attacks subsided late Saturday afternoon/evening, they have apparently started up again on Sunday (9/8/2019) – 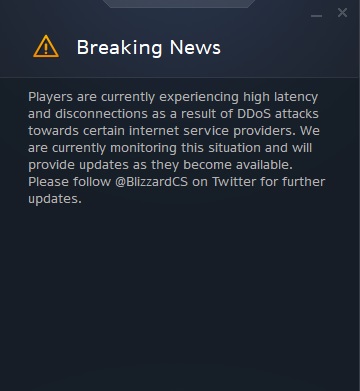 [#WoWClassic] Our teams are currently investigating issues impacting realm stability. Thank you all for your reports.

[#Bnet] We are currently monitoring a DDOS attack against network providers which is affecting latency/connections to our games.

Published in Entertainment and World