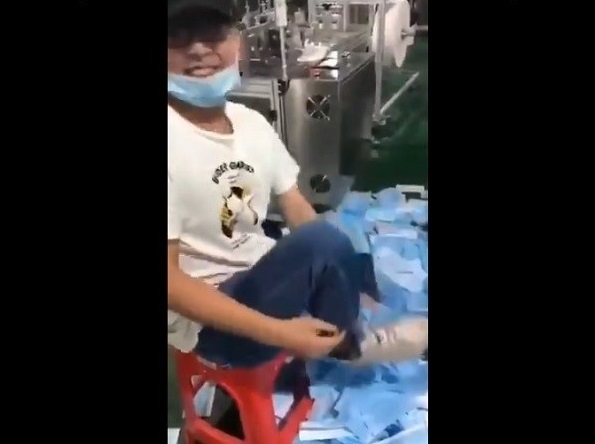 As the number of global COVID-19 infections nears one million, a factory worker in China was recently filmed rubbing his shoes on newly manufactured surgical face masks that were allegedly bound for export.

Social media user Harry Chen PhD shared the disgusting act on Twitter, asking if the masks shown in the video were going to be exported to other countries and if we can “trust China to do the west’s manufacturing”:

Chinese factory worker runs his shoes on the masks asking the camera man if this is good enough. Are these the masks for export??? Can we trust China to do the west’s manufacturing? pic.twitter.com/ZFZHILZacj

The video was uploaded at 10:14 a.m. Monday morning by a Chinese coronavirus vlogger from Wuhan who goes by the pseudonym Harry Chen PhD. Before being suspended by Twitter in late February, Chen’s Twitter account had gained 35,000 followers for his frequent insider videos of the outbreak in Wuhan and CCP abuses.

Chen later created a new account through which he has defiantly continued to post videos his trusted sources in China sent him through encrypted channels. Chen told Taiwan News that the video had been filmed on Monday by workers in a factory converted to produce surgical face masks.

UPDATE: Below is a video compilation put together by The Red Elephants that shows a number of people intentionally trying to spread their germs and maybe even the coronavirus itself –

This ‘lady’ is caught on CCTV PURPOSELY SNEEZING on fresh produce in a Sydney supermarket!

No indication as yet whether she has been identified.

It’s not ONLY the Chinese CCP that need to be held to account!#CoronaVirus #ChinaLiedPeopleDied #auspol pic.twitter.com/Sf4yxgqqjv

Are these Chinese intentionally spreading the virus? pic.twitter.com/ZWrnmtRXvz

Chinese.
Along with great efforts of the chinese govt and people; there are people like this also who are spreading the virus through their sputum intentionally so that other may get virus. pic.twitter.com/DN7Wqn9O5I

Chinese lady caught up in camera trying to spread virus by spitting, spraying.

Many videos shows Chinese do this to own people &across the world.

Dear Gov’t of Uganda, this woman was caught on CCTV maliciously spreading the virus by putting water in her mouth and spitting it onto surfaces people touch and sit on. Is this the China you said we are safer in @KagutaMuseveni ? #EvacuateUgandansInWuhan pic.twitter.com/xQcxnDPOPZ

Dear Gov’t of Uganda, here is another video of someone caught on CCTV maliciously trying to spread the virus by taking off his mask and coughing at hospital staff. Is this really the country you think we are safer in @KagutaMuseveni and @OfwonoOpondo #EvacuateUgandansInWuhan pic.twitter.com/CF4svN3pSB

This chinese man who’s believed to be infected by the #coronavirus is spitting on women to get them infected. pic.twitter.com/lyGOr1aZrS