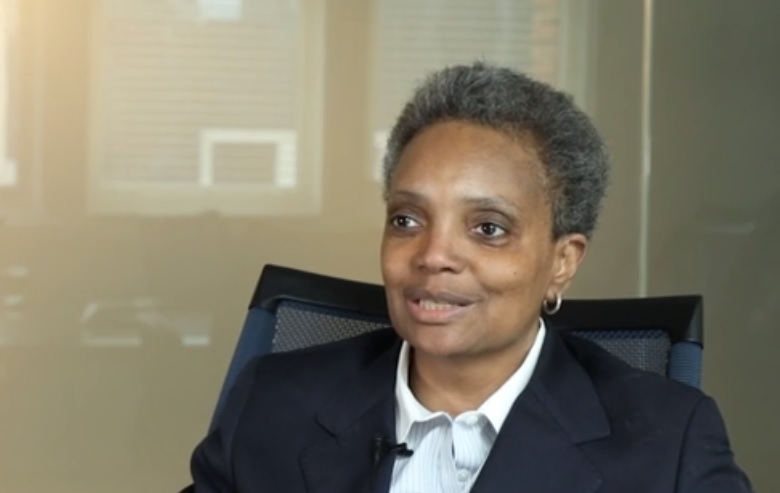 On Monday, Twitter user ‘VICCI’ shared a strange video clip of Chicago Mayor Lori Lightfoot talking about city training and how agencies and deputies who have pledged “allegiance to the New World Order” should be involved.

The exact context of the discussion is difficult to make out. Watch below:

And here you have it Illinois!! It has ZERO to do with COVID-19 and everything to do with marching us into the New World Order! Mayor of Chicago freely calls it out with no shame! Our sovereignty is being threatened.. time to FIGHT! #ObamaGate @realDonaldTrump LISTEN! pic.twitter.com/Im78BI1B0X

“…With the executive branch, because otherwise it doesn’t work. So, you gotta eliminate that compliance and make a mandate.

“And then you do training, particularly in the city […] licensing departments, whether it’s zoning, buildings, housing will be impacted by it, planning, certainly.

“And you pick the people around those agencies, and the deputies that are pledging allegiance to the New World Order and good governance. And then I think you have the inspector general do some spot audits to make sure that…”

User ‘Bobby D’ shared the clip again on Wednesday and had this to say about it:

“Wait, I thought we sheltered to ruin our economy to take down Trump? Wait, I meant to flatten the curve. Well looky here, apparently it’s to usher in the New World Order! Raise your hand if you think this whole thing is a scam.”

Others who have seen the video also gave their thoughts about what it could possibly mean:

“Holy sh*t, they’re this blatant about it. They’re literally calling out for a New World Order.”

“What the f*ck happened to the Democratic party? They sold out to China and the NWO or what?”

“They know no one will do anything about it, and no one has, so they can just admit it openly now and laugh in your face.”

UPDATE #1: Apparently this clip was taken from a 2019 Chicago Tribune interview. It was published on their website in an article titled ‘Lori Lightfoot unfiltered: The full Tribune Q&A with Chicago’s mayor-elect.’

Here is the question and answer portion of the interview where Lightfoot mentions the New World Order:

Q: You ran on getting rid of aldermanic privilege (the practice of aldermen having veto power over all permitting and zoning decisions in their wards). That’s probably easier to talk about than the mechanics of actually withdrawing that practice. It’s not like it’s a line in the city code. It’s deeper than that. How do you go about addressing that?

A: I’m going to consult with some of the alderman who have been supportive of the campaign. I’m very clear on it. Some of them have a very different view, but I’m very clear that it’s got to go. I want to do it in a way that doesn’t do further harm, the quintessential throwing the baby out with the bathwater. But it’s got to go. How do you do it? My thoughts are that because it’s not written into law and it’s just a very dominant culture … I’m thinking about an executive order from day one that says in more legalese than this, “This is not a thing. We will no longer honor this.”

Because the way that aldermanic prerogative works is there’s got to be compliance with the executive branch, because otherwise it doesn’t work. So, you’ve got to eliminate that compliance, and you make it a mandate. And then you do training, particularly in the city licensing departments whether it’s zoning, buildings, housing, planning, and you pick the people who run those agencies and the deputies that are pledging allegiance to the new world order and good governance. And then I think you have the inspector general do some spot audits to make sure that there is real compliance.

You obviously have to engage in a dialogue with the City Council. It’s not that alderman no longer are able to have notice and an opportunity to be heard. If aldermen are doing their job right, they should be the people who are closest to the vibe and the beat in their neighborhood and have a very important role to play on a number of different issues, but not a unilateral, unchecked right. That’s gone as soon as I take office, because it prevents us from engaging in citywide initiatives, it prevents us from moving ahead on important issues like affordable housing and it is fundamentally corrosive and there is no way to monitor it in a way you can bring transparency and accountability to it.

If I’ve got to go and kiss the ring of the alderman for everything, for a license to have a block club party or whatever it is and there is a catalog of all the things that are run through the aldermanic offices, that is fundamentally a problem. And it’s the tens of thousands of touches that an alderman has on a regular basis with constituents who think that they have to give some additional thing to get access to basic city services, that is the corrosive effect. And it’s obviously worse when an alderman takes that power and then tries to monetize it for him or herself.

UPDATE #2: On May 31, Mayor Lightfoot recently engaged Alderman Raymond Lopez in a heated debate after he criticized her (lack of) response to the pillaging and looting that was occurring throughout the city of Chicago.

“When downtown is in lockdown, our neighborhoods are next, and our failure to fully get ready for what’s going on in the neighborhoods, we’re seeing this destruction, and we’re thinking that it’s going to somehow end tonight. We have seen where, in other cities, this has gone on for days; and we need to come up with a better plan for days, at least for the next five days, to try and stabilize our communities,” Lopez said.

“We can’t expect our police, and I don’t fault them at all, to be able to control this,” he said. “Half our neighborhoods are already obliterated. It’s too late.”

Lopez said he feared looters would eventually start targeting homes after ransacking businesses throughout the city.

“Once they’re done looting and rioting and whatever’s going to happen tonight, God help us, what happens when they start going after residents? Going into the neighborhoods? Once they start trying to break down people’s doors, if they think they’ve got something,” he said.

“We know that people are here to antagonize and incite, and you’ve got them all pumped tonight, today. They’re not going to go to bed at 8 o’clock. They’re going to turn their focus on the neighborhoods. I’ve got gang-bangers with AK-47s walking around right now, just waiting to settle some scores. What are we going to do, and what do we tell residents, other than good faith people stand up? It’s not going to be enough,” Lopez added.

When Lopez finished talking on the conference call, Lightfoot declined to respond, and tried to move on to another alderman, but Lopez demanded an answer.

“It’s not something you ignore. This is a question that I have,” Lopez said.

That’s when the call turned profane.

The mayor vehemently denied protecting downtown at the expense of the neighborhoods.

“If you think we’re not ready, and we stood by and let the neighborhoods go up, there’s nothing intelligent that I could say to you,” she said. “That is the stupidest thing I have ever heard. I understand you want to preen.”

“Mayor, you need to check your f***ing attitude. That’s what you need to do,” Lopez shot back.

Read their full article, which includes leaked audio of the meeting