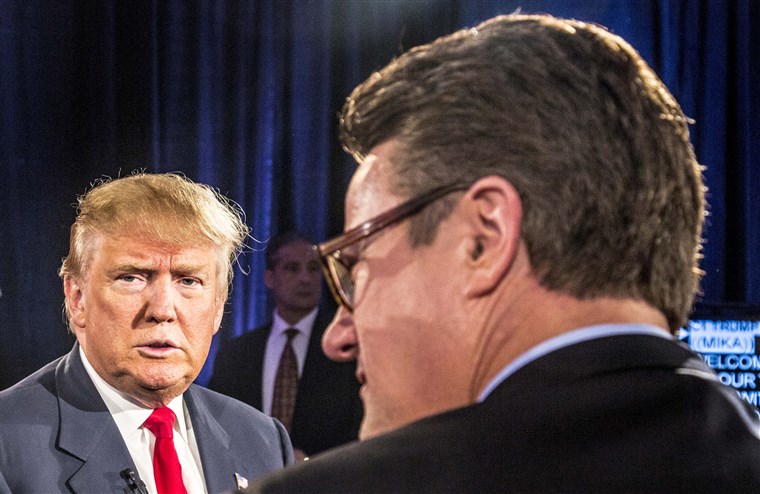 Earlier today, a Fort Walton Beach Police Department investigation report on the death of Lori Klausutis, a staffer who worked for former FL congressman and MSNBC host Joe Scarborough, was uploaded to Dropbox.

This comes after the POTUS himself questioned the authenticity of the investigation and whether Scarborough was possibly involved:

….about whether or not Joe could have done such a horrible thing? Maybe or maybe not, but I find Joe to be a total Nut Job, and I knew him well, far better than most. So many unanswered & obvious questions, but I won’t bring them up now! Law enforcement eventually will?

A lot of interest in this story about Psycho Joe Scarborough. So a young marathon runner just happened to faint in his office, hit her head on his desk, & die? I would think there is a lot more to this story than that? An affair? What about the so-called investigator? Read story! https://t.co/CjBXBXxoNS

The Klausutis police report is dated 7/20/2001, is 25 pages long and was created by Officer Mark Erwin.

Contained within the report is a detailed description of what Officer Erwin encountered when he set foot inside Scarborough’s office:

“She was flat on her back fully dressed. Foam was coming from her mouth and nose. There was some red substance (probably blood) on the outer edges of the foam. There was an office chair near her head…”

Here are some more snippets from the document:

“Around 1130 hours we observed the mail carrier delivering mail at the mail boxes on the east side of the parking lot about in the middle of the island. The mail carrier identified himself as J**** C*******. He told me when he delivered mail yesterday (07-19-01) he delivered a certified letter that required a signature. When he took the letter into the office Lori appeared nervous. She told him she did not feel well and she attributed this to too much coffee…

“I attended the autopsy with M.E. and crime scene/evidence technician D**** R*****. Dr. ******** [and] I observed a fractured skull. Dr. ******** pointed out the fracture was on the top right side of the skull. It was consistent with hitting the desk as she fell in a backwards direction. There was no indication of foul play observed…

“In regards to question on the victim’s married life Mrs. H*** described a very loving husband and wife who consistently talked about each other in a very positive manner. Mrs. H*** stated that the victim would never jeopardize her relationship with her husband by entertaining an affair of any caliber. Mrs. H*** was asked if the victim was suffering from any abnormal stress and she stated no but she did have a lot going on in her life at this time. Mrs. H*** elaborated and explained that the victim was current[ly] searching for a new job and had upcoming interviews…

“Mrs. B**** upon reading the email called the victim on the telephone to personally congratulate her for getting an interview. Mrs. B**** felt that telephone call was warranted because all the girls are attempting to locate new jobs due to Congressman Scarbourgh’s resignation and she was the first one to get an interview. The telephone conversation started by Mrs. B**** congratulating the victim and asking more details on the job. The conversation then turned to business-related matters in general and B**** and Mrs. B**** asked the victim how she has been. The victim stated “I’m not feeling very well”

Am I reading this wrong – was her car in the car park at 5am and the lights in the office on? If she died over night why didn’t her husband go to check on her?
Where was Joe at the time? He was scheduled for the meeting was he not? Did the police even check?

Thinking it might be time to exhume her body and run tests again since the Medical Examiner has such a shady history. Time for new tests!

UPDATE #1: Medical examiner’s report on the 2001 death of Lori Klausutis

UPDATE #2: It appears Joe Scarborough believed Lori Klausutis had health conditions, which contradicted what her family members said at the time of her passing.

In the 2008 book Forensics Under Fire: Are Bad Science And Dueling Experts Corrupting Criminal Justice? by Jim Fisher, an ABC television affiliate employee reported Scarborough had called the station three hours after the discovery of Klausutis’ body to discuss the matter (source, page 33-34) –

“The day after Lori Klausutis was found dead, the story, as shaped by the police, Michael Berkland, and perhaps staffers in Scarborough’s office, featured the victim’s history of bad health. Tales of her ill health tended to throw water on the idea that she might have been the victim of foul play. And other than suicide or some bizarre office accident, what else could explain the sudden death of a twenty-eight-year-old woman? According to an employee of the local ABC television affiliate, Representative Scarborough called the station three hours after the discovery of the body to inform them that Klausutis had a “complicated” medical history that included “stroke and epilepsy,” as journalists Chris George and Denis Wright reported. Scarborough’s press secretary told the media, without providing details, that Klausutis had not been in perfect health. The Fort Walton Beach chief of police confirmed that his detectives were investigating the victim’s medical history. Members of the Klausutis family, however, were denying that Lori had been unhealthy. She had belonged to a track club and had just posted a good time in an eight-kilometer race.” 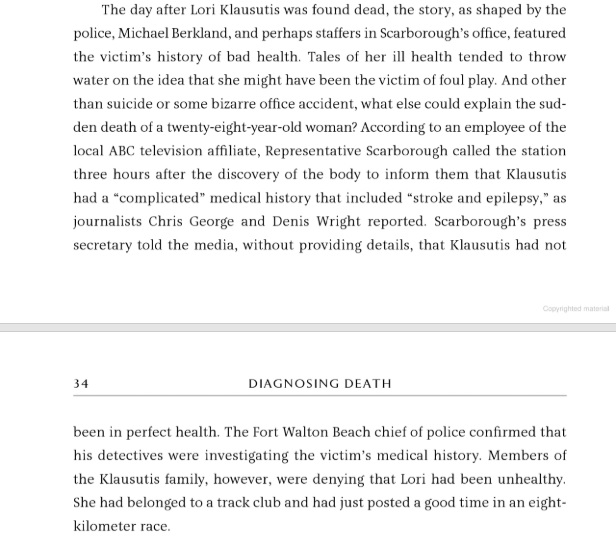