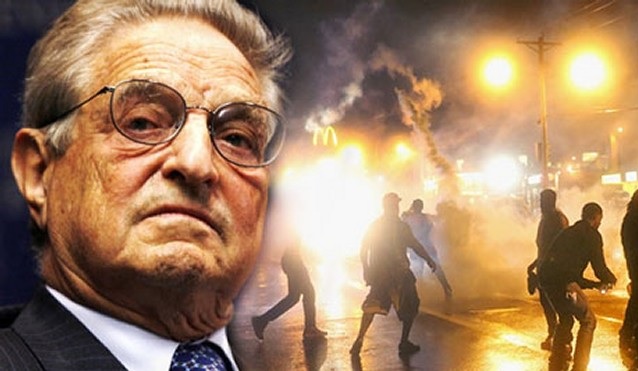 Is George Soros Funding The Riots Taking Place In America?

The following information was taken from a lengthy online forum post (unknown date & time). The author describes a movement called ‘Democracy Spring’ which is supposedly a domestic version of a colour revolution. (Note: Some of the text has been altered for spelling, grammar and context to reflect current events).

As many of you have suspected, the current push for a “Democracy Spring” is funded directly by George Soros [1] in an extreme act of escalation against Trump and US democracy. The name sounds suspiciously close to “Arab Spring,” but let’s put that one to the side for a moment.

What the hell is a “Democracy Spring?” Well, their stated objective is to “take out dark money from the political process.” Surely that’s agreeable isn’t it? Isn’t that what Trump is doing by self-funding? Looks deceive of course. They themselves are funded by George Soros’ “dark money.” How can they possibly stand against it? Besides, when nominees are down to two viable people per party, why is this necessary at all? The answer is it isn’t necessary and they don’t really believe in what they demand, but by mirroring Trump, they achieve invulnerability against any attacks by Trump, or any other clever maneuver.

This is about two simple scenarios involving so-called “protests”:

If Trump commits to action 1, the group will point to its fake objective and declare Trump the real target of it; his opposition proving that he is scared of whatever vague proposition they are putting forward. Furthermore, it would be the best case scenario because it would put them against Trump directly which is important for later. If Trump commits to action 2, he loses his main base for supporting what is obviously a leftist “protest” aimed to disrupt the democratic process, however flawed it is. In any case, they will still declare him the target of their protest and reject his praise, damaging his credibility.

In most likelihood, he will choose to ignore it and attack George Soros indirectly. But unfortunately, that’s not going to be enough because that’s not the worst case scenario. George Soros is a specialist in “colour revolutions” [2] and so it is instructive to briefly explain how they work in order to relate it to the most likely strategy that is going to be played out against Trump.

Colour revolutions target foreign governments with a political establishment that is not compliant with globalist wishes and they are started in the following steps:

Now, is this what George Soros is planning, another Arab Spring, in Washington, D.C.? Of course not. They already control Washington, D.C. What they want to do is keep Trump, a man they have no strings attached to, from taking that control from them. It would take him very little time to reverse all the globalist policies they fought tooth and nail for. Thus, this ultimate fourth generation warfare strategy is being repurposed to target Trump in reverse. What follows is a “reverse Arab Spring” strategy, to be unveiled for the first time.

“Protestors” are indeed being trained for two weeks under the guise of non-violent action [3]. Now, let’s revisit this premise for a second. What exactly are they going to be “taught?” Protocols. Action plans. For example, “what do you do if a law enforcement officer fires on you,” or “what do you do if an outside party fires on or attacks you?” This has to be carefully programmed in each of these useful zombies to make sure there is at least some predictability about the chaos that will ensue soon.

UPDATE #1: We cannot confirm the authenticity of the following documents, but reports indicate they were allegedly distributed in 2015 by a group called ‘Friends of Democracy,’ a political action committee founded by Jonathan Soros.

Are these exact same tactics being used to disrupt the 2020 election? (Source: Facebook) 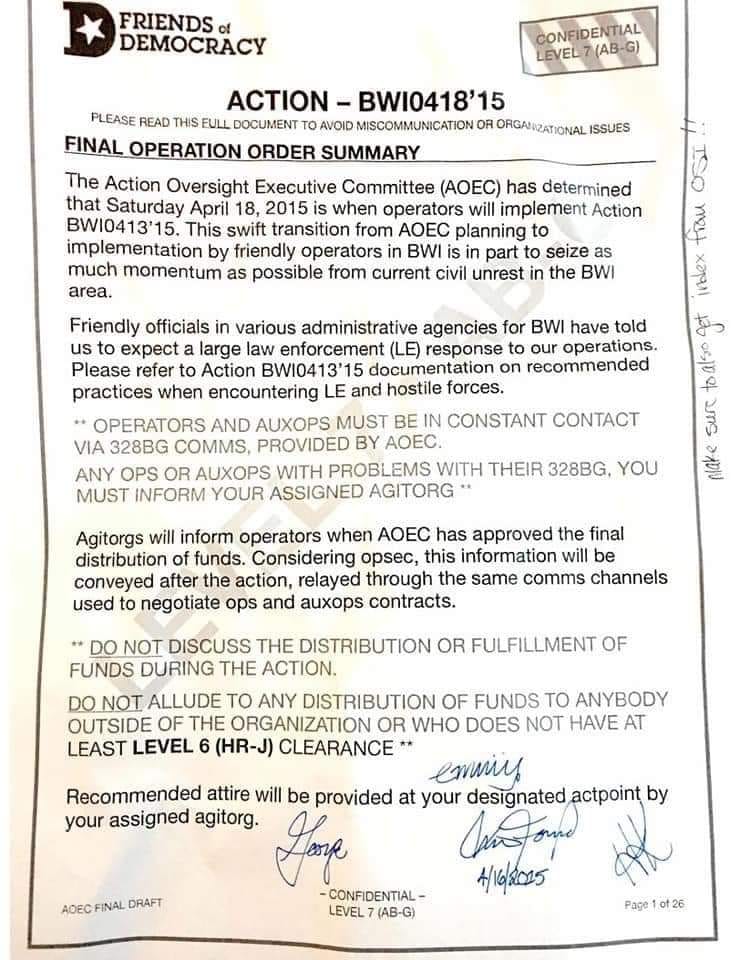 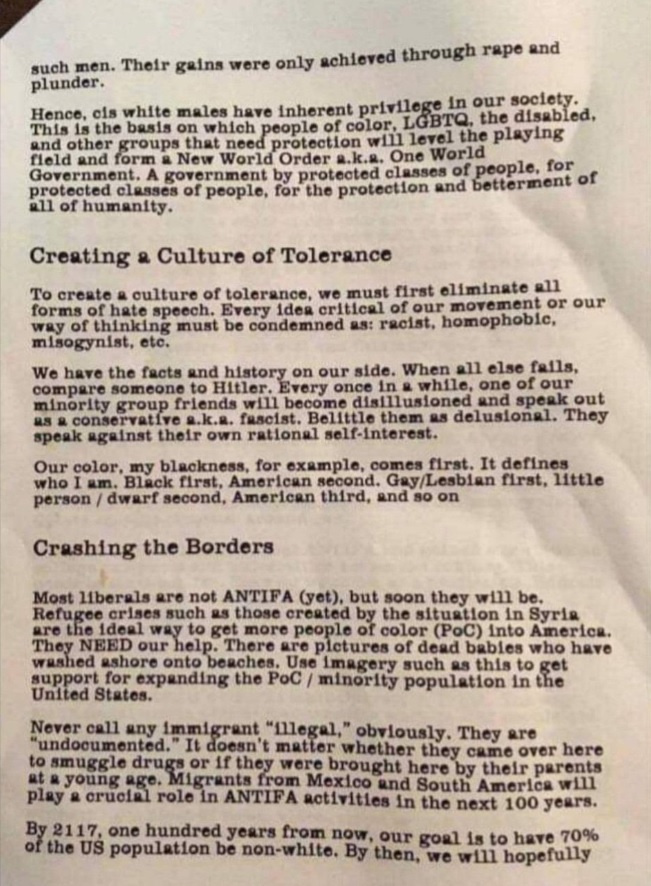 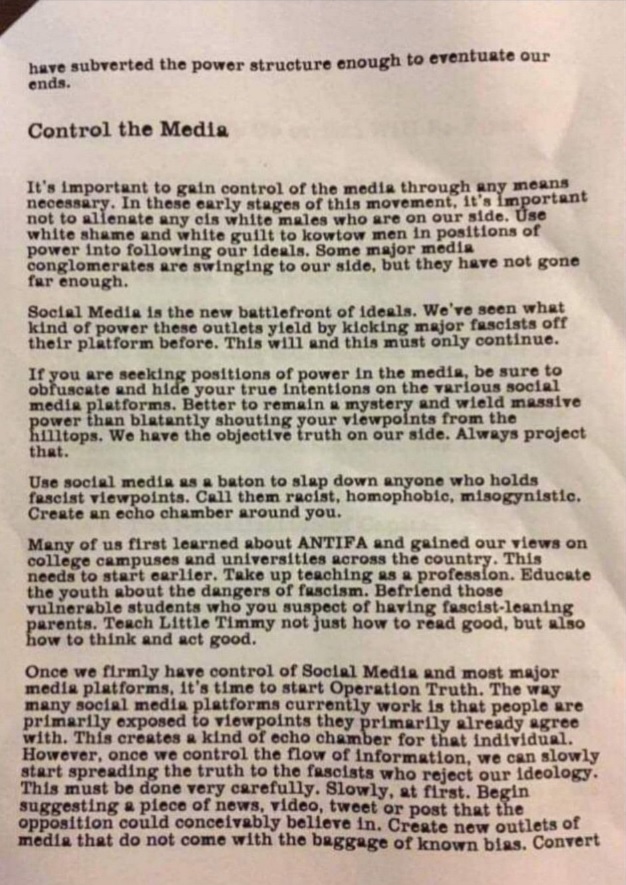 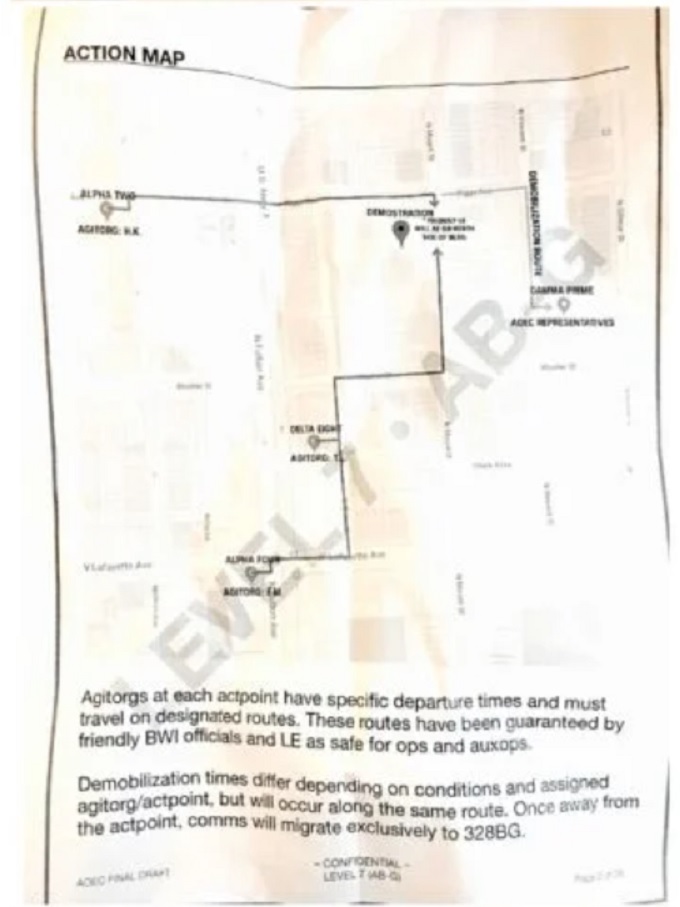 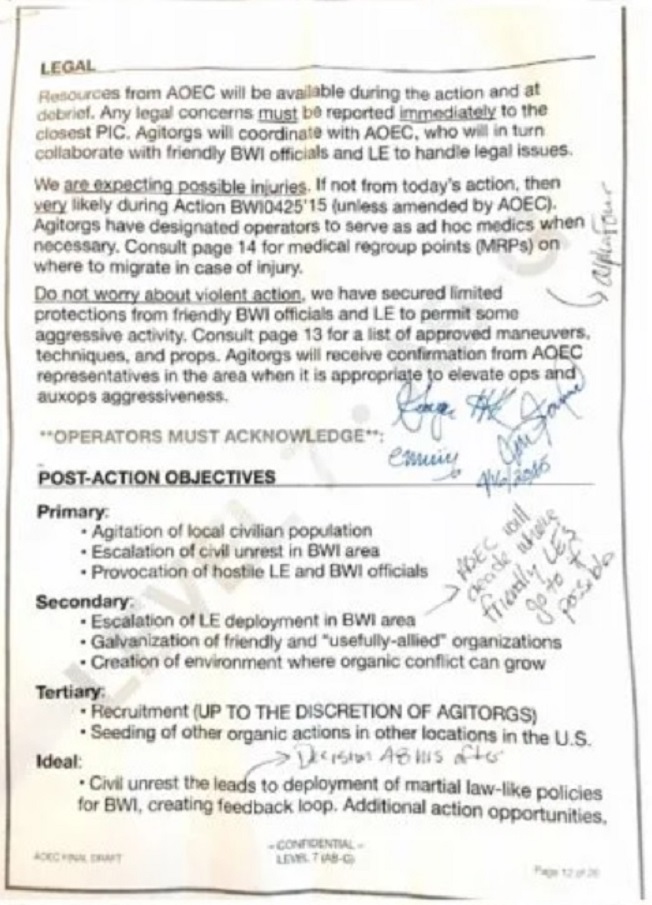 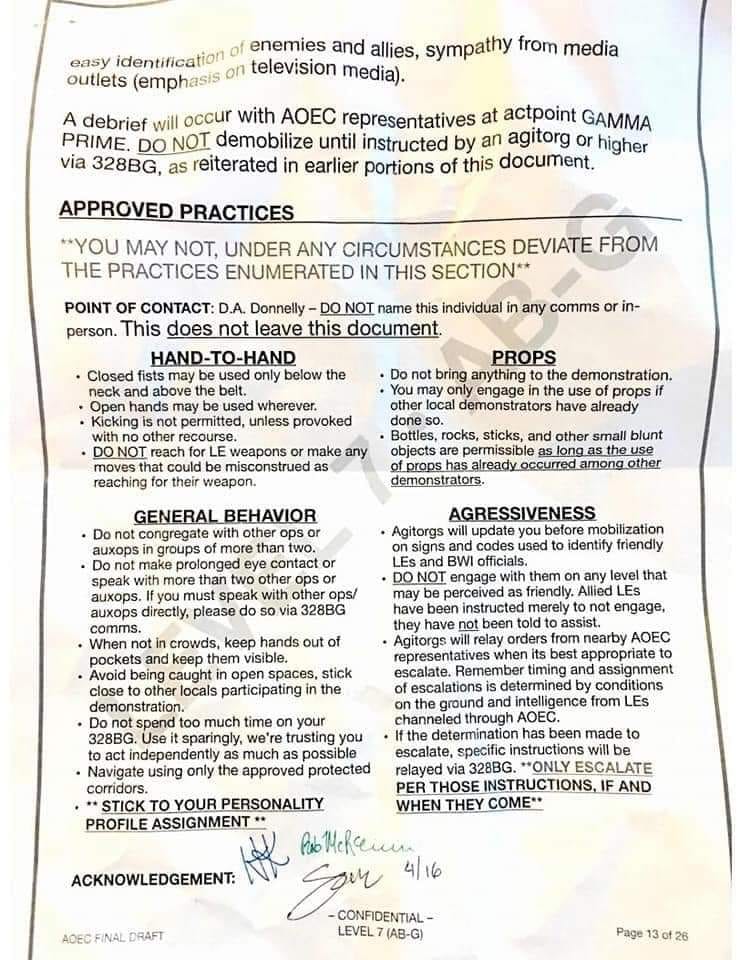 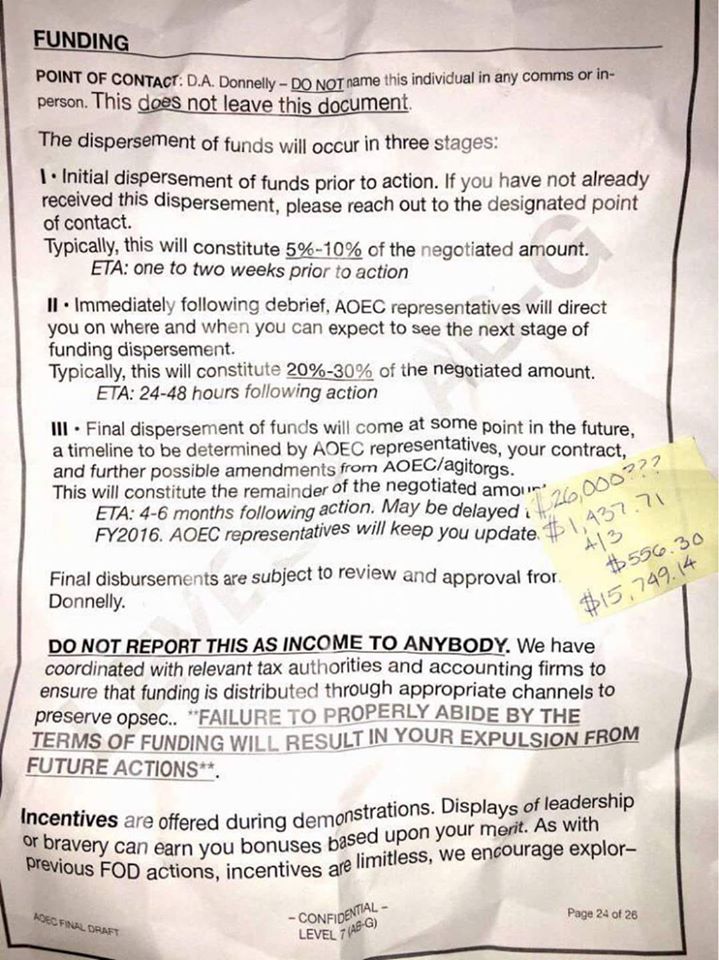 Note: If you happen to have access to the full 26-page manual, please email us at contact@cloverchronicle.com. Your identity will not be revealed (unless requested) and any other information will remain confidential.

UPDATE #2: A now-deleted tweet from May 30th revealed a “very odd pallet of bricks” was placed near an ongoing riot in Minneapolis – 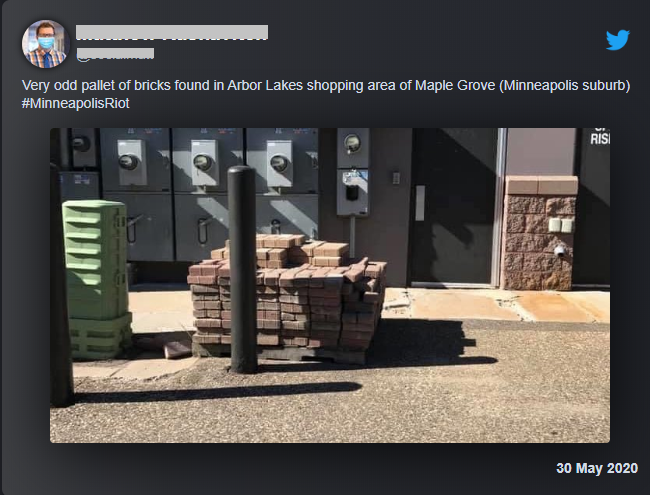 Check out this video on Streamable using your phone, tablet or desktop.

We found this, and many other videos, in a forum thread titled ‘Reminder: I have you on video.’

Soros pumps more than $28 million into Democratic groups for 2020

The Atlantic (a 1997 article actually authored by Soros himself) –

UPDATE #5: Is the following flyer real or fake? We’ll let you be the judge of that (Source: Facebook) – 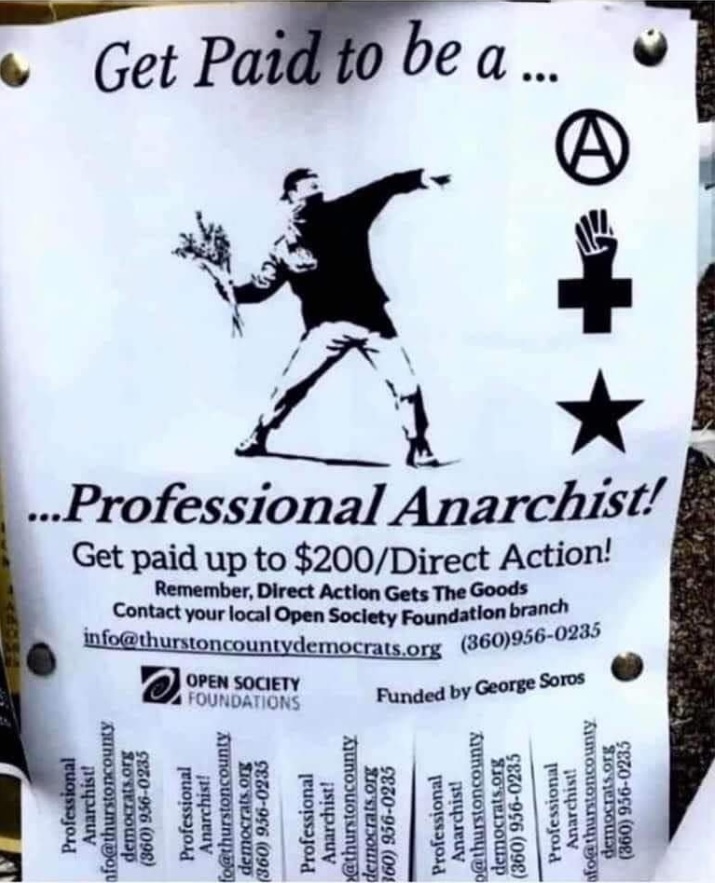 UPDATE #6: Here is another social media post showing stacks of bricks laying around a Dallas city street. Were they put there for rioters? (Source) 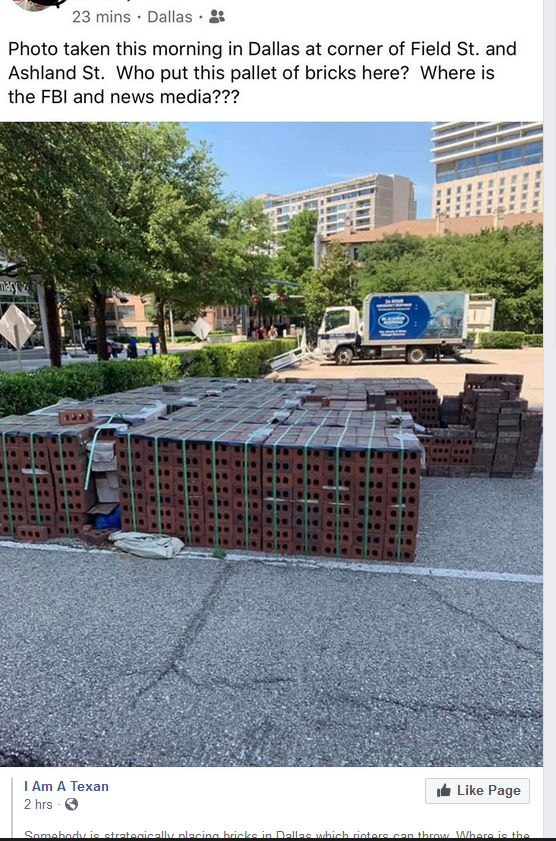 Gee how lucky Antifa an BLM just happened to find bricks, how convenient. This is all organized. #Repost @trumptriggersliberals

UPDATE #8: In January, George Soros said the following about President Trump at the World Economic Forum in Davos, Switzerland –

“The stock market, already celebrating Trump’s military success, is breaking out to reach new heights. But an overheated economy can’t be kept boiling for too long. If all this had happened closer to the elections, it would have assured his reelection.

“His problem is that the elections are still 10 months away, and in a revolutionary situation, that is a lifetime.”