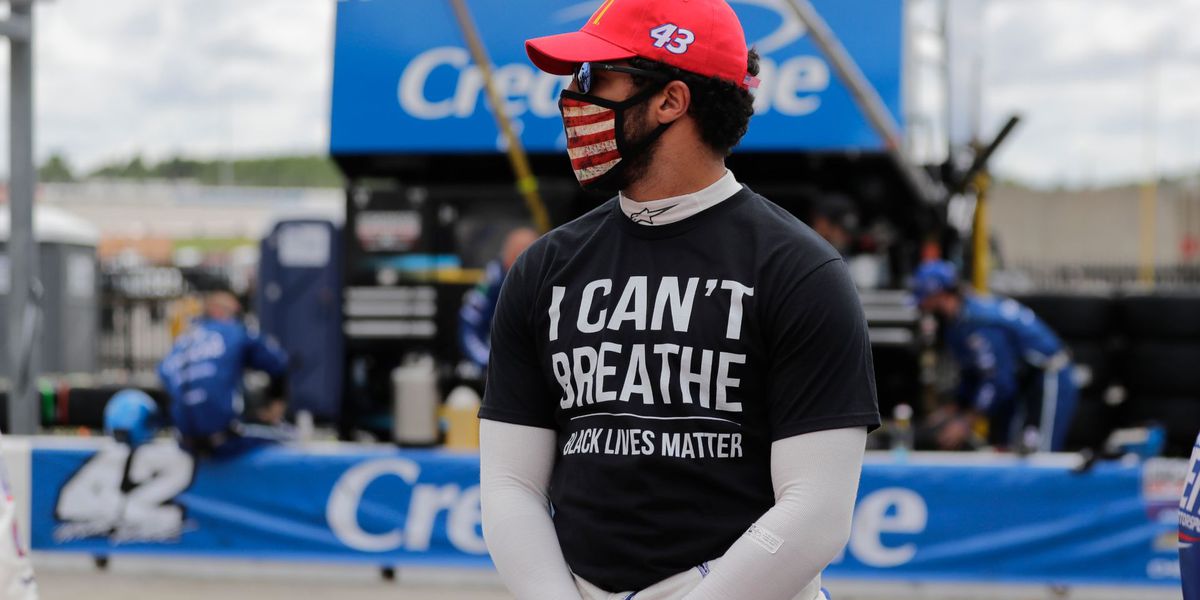 Racial tensions are at an all-time high in the United States, but that didn’t stop NASCAR driver Bubba Wallace from instantly assuming a “garage door pull rope fashioned like a noose” was an attack against both himself and his race.

The door pull rope seems to be common throughout NASCAR garages and had been hanging in his team’s garage since last fall.

According to a timeline article put together by AL.com (Sunday, June 21):

“Bubba Wallace receives a call from NASCAR president Steve Phelps, and ‘it is a phone call I’ll never forget,’ he told CNN on Tuesday night. Phelps went by Wallace’s motor home for an in-person conversation and, according to Wallace, said a ‘hate crime’ had occurred. The NASCAR president told Wallace he would not stand for it.”

The tweet has so far garnered over 250K likes and 44K retweets.

Since then, the FBI conducted an investigation and concluded it was not a hate crime.

According to a statement from NASCAR:

“The FBI has completed its investigation at Talladega Superspeedway and determined that Bubba Wallace was not the target of a hate crime. The FBI report concludes, and photographic evidence confirms, that the garage door pull rope fashioned like a noose had been positioned there since as early as last fall. This was obviously well before the 43 team’s arrival and garage assignment. We appreciate the FBI’s quick and thorough investigation and are thankful to learn that this was not an intentional, racist act against Bubba…”

When the investigation was still ongoing, prominent Democrats, like Illinois Congressman Bobby L. Rush, condemned the “disgusting act” while pressuring the U.S. Senate to “pass the Emmett Till Antilynching Act to rebuke these white supremacists and show them that we will not be intimidated!”

This disgusting act demonstrates that the specter of lynching is still alive and well.

The Senate must pass the Emmett Till Antilynching Act to rebuke these white supremacists and show them that we will not be intimidated! https://t.co/sFuvLpzkCH

Here is another tweet from Rush. This time he mentioned not only Wallace’s “predicament,” but also brought up the fact that six black Americans were found hanging from trees in New York and California:

In the wake of the lynching of #AhmaudArbery, six Black Americans have been found hanging in trees from New York to California. The specter of lynching was even used to threaten @NASCAR’s lone Black driver for daring to speak out against racism. https://t.co/FWrza0CjSS

Although the findings of each of those tragic deaths are inconclusive (i.e. they could have been suicides), Democrats continually push a divide-and-conquer narrative: In the year 2020, blacks are actively being lynched, and whites are at fault.

Rush didn’t stop there, though. He said “beyond a shadow of a doubt” lynching is “alive and well in #AmeriKKKa” (note the spelling) and further pushed for the Emmett Till Antilynching Act to be passed in the Senate as a stand-alone bill:

These cowardly acts prove beyond a shadow of a doubt that lynching is alive and well in #AmeriKKKa, and as such, requires the Senate to immediately pass the Emmett Till Antilynching Act as a stand-alone bill. https://t.co/KVogBTZFCD

All of this is strangely reminiscent of the Jussie Smollett fake “MAGA country” attack when two of his Nigerian-American friends helped him gain notoriety by throwing a prop noose around his neck.

When that whole circus was being talked about constantly on leftist networks like CNN, MSNBC, NPR and others, Democratic Senators Kamala Harris and Cory Booker were virtue signalling online about how lynching is a modern-day epidemic:

.@JussieSmollett is one of the kindest, most gentle human beings I know. I’m praying for his quick recovery.

This was an attempted modern day lynching. No one should have to fear for their life because of their sexuality or color of their skin. We must confront this hate.

To those in Congress who don't feel the urgency to pass our Anti-Lynching bill designating lynching as a federal hate crime– I urge you to pay attention. https://t.co/EwXFxl5f2m

Now, notice the identical wording both of these senators used in the below side-by-side comparison: 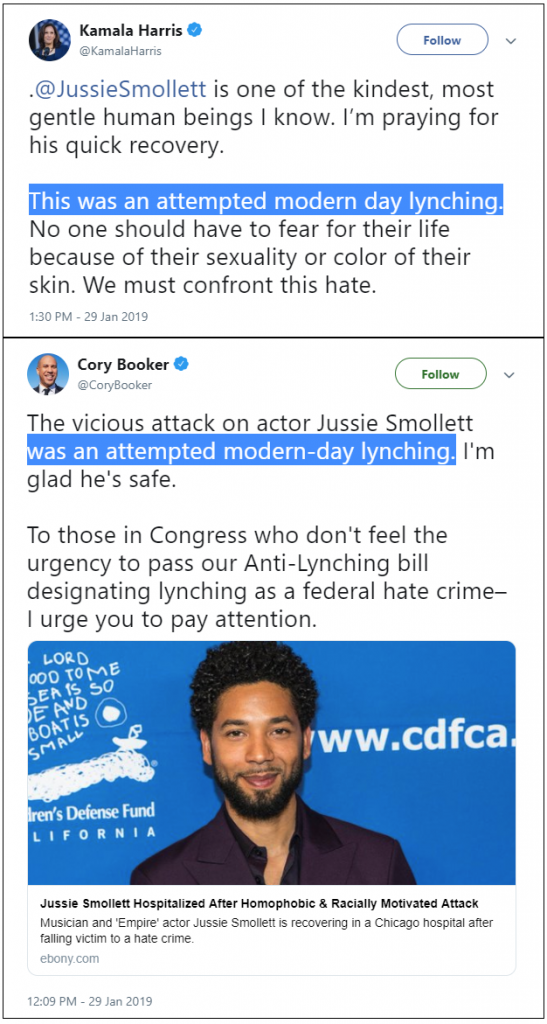 Interestingly enough, just days ago, Harris and Booker engaged in a heated and emotional debate with Kentucky Senator Rand Paul over anti-lynching legislation. 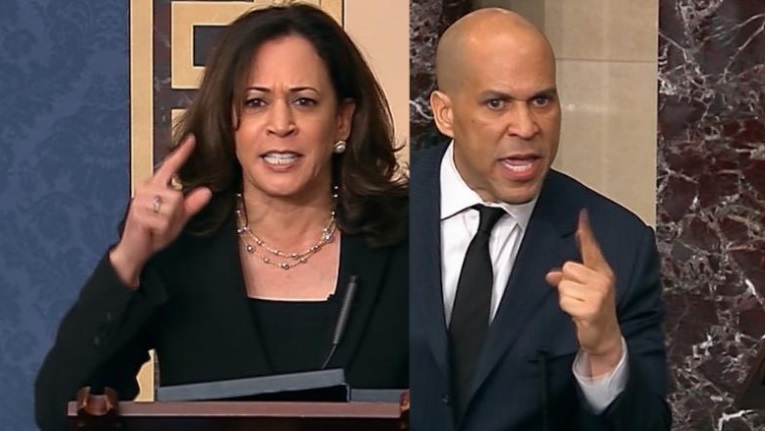 In an emotional exchange on the Senate floor, Democratic Sens. Cory Booker of New Jersey and Kamala Harris of California spoke out Thursday against an amendment that GOP Sen. Rand Paul of Kentucky was trying to add to anti-lynching legislation.

In emotional remarks, Booker said he felt “so raw today,” saying, “of all days we’re doing this right now when God, if this bill passed today, what that would mean for America. That this body and that body have finally agreed.”

“It would speak volumes for the racial pain and the hurt of generations,” Booker said. Raising his voice, he continued, “I do not need my colleague, the Senator from Kentucky, to tell me about one lynching in this country. I’ve stood in the museum in Montgomery, Alabama, and watched African-American families weeping at the stories of pregnant women lynched in this country and their babies ripped out of them while this body did nothing.”

Is this all merely a coincidence? Democrats, after all, founded the Ku Klux Klan (KKK) – a group that was created to systematically persecute, and even assassinate, black politicians in the 19th and early 20th centuries.

Why wouldn’t they continue their mission of spreading hate and racial division, especially during the most important presidential election of our lifetimes?