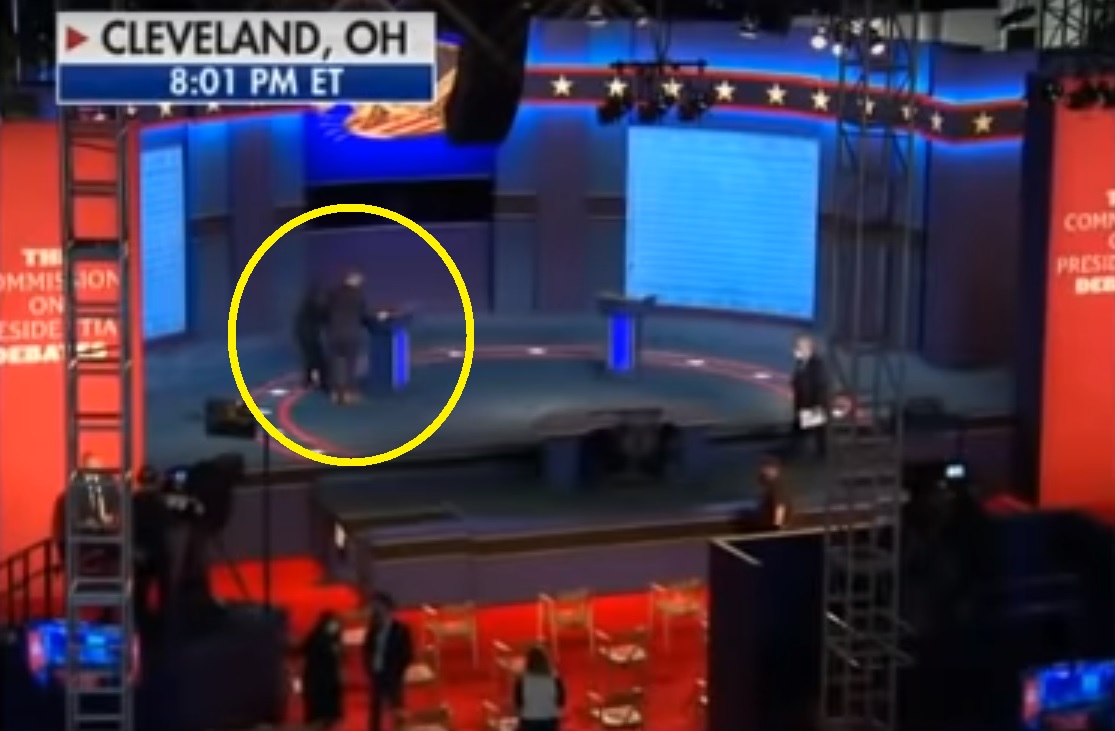 President Trump’s Debate Podium Was Suspiciously Wiped Down Not Once, But Twice – This Happened Just Days Before He Tested Positive For Coronavirus

Shortly before the first presidential debate was set to start, two people were seen near President Trump’s podium wiping it down, each at a separate time.

One man wore a mask, no gloves and was holding a spray bottle of what appears to be disinfectant:

Another, who also appeared to be wearing a mask, as well as gloves, used some type of cloth or rag to “clean” the area of the podium that Trump would be touching, along with his microphone – an item that was usually within close vicinity of his mouth during the 90+ minute debate (Source: @teresa92999471 / Twitter) –

Two days later, the president announced on Twitter that both he and First Lady Melania Trump had contracted COVID-19:

Tonight, @FLOTUS and I tested positive for COVID-19. We will begin our quarantine and recovery process immediately. We will get through this TOGETHER!

Since then, many Americans have been speculating about whether or not the president was intentionally infected considering the election is now less than 30 days away.

Oddly enough, at least three Republican senators have also tested positive for the virus – two of whom sit on the Judiciary Committee.

Republicans had a straightforward path to confirm Supreme Court nominee Judge Amy Coney Barrett before the Nov. 3 presidential election – get at least 51 senators united behind quickly moving the nomination and weather Democrats’ verbal barbs about Barrett’s perceived stances on Roe v. Wade and the Affordable Care Act (ACA) – and there wasn’t much Democrats could do to slow the elevation of the 7th Circuit judge to the highest court in the land.

But positive coronavirus tests by three Republican senators, two of whom are on the Judiciary Committee, have thrown a wrench in Republicans’ plans and given Democrats a new talking point.

“It’s not a matter of using it, it happened,” Judiciary Committee Sen. Amy Klobuchar, D-Minn., said to Fox News’ Sunday’s Chris Wallace when he asked if Democrats would use the GOP members’ positive coronavirus tests to delay the Barrett confirmation.

“We don’t know how many other Republican senators have it … they have a lunch together where they don’t have masks,” she said. “It’s very possible we’re going to have more senators, more staff. So I don’t know why you would ram through this Supreme Court hearing, put people in danger because it would be within that two-week period, while you have shut down the whole Senate.”