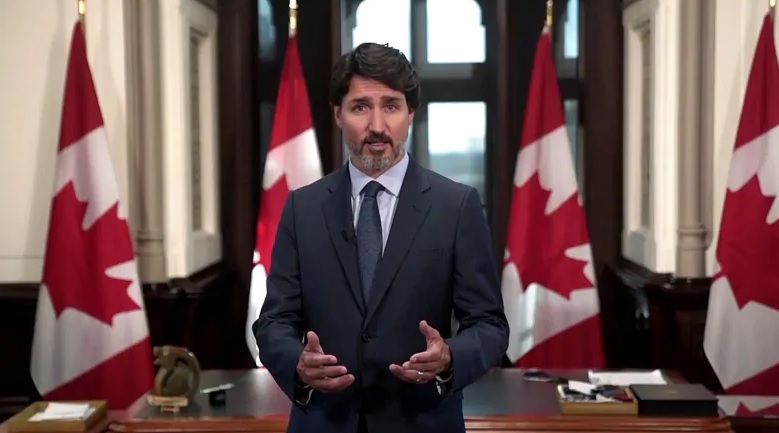 Canadian Prime Minister Justin Trudeau recently made a disconcerting speech about the situation regarding COVID-19, and what the future plans of not only his nation, but possibly the world, would look like.

He explained how “building back better” would mean “getting support to the most vulnerable while maintaining our momentum on reaching the 2030 agenda for sustainable development.”

Midway through the announcement, Trudeau stated:

“This pandemic has provided an opportunity for a reset. This is our chance to celebrate our pre-pandemic efforts; to reimagine economic systems that actually address global challenges like extreme poverty, inequality and climate change.”

In a forum thread titled ‘Global Reset,’ an anonymous user shared images of an alleged leaked email from a committee member of the Liberal Party of Canada.

The Canadian Report originally transcribed the email’s message, which was then shared again on Informed Consent after they had apparently experienced “server issues” after being “under attack” –

I want to provide you some very important information. I’m a committee member within the Liberal Party of Canada. I sit within several committee groups but the information I am providing is originating from the Strategic Planning committee (which is steered by the PMO).

I need to start off by saying that I’m not happy doing this but I have to. As a Canadian and more importantly as a parent who wants a better future not only for my children but for other children as well. The other reason I am doing this is because roughly 30% of the committee members are not pleased with the direction this will take Canada, but our opinions have been ignored and they plan on moving forward toward their goals. They have also made it very clear that nothing will stop the planned outcomes.

The road map and aim was set out by the PMO and is as follows:

– Phase in secondary lock down restrictions on a rolling basis, starting with major metropolitan areas first and expanding outward. Expected by November 2020.
– Rush the acquisition of (or construction of) isolation facilities across every province and territory. Expected by December 2020.
– Daily new cases of COVID-19 will surge beyond capacity of testing, including increases in COVID related deaths following the same growth curves. Expected by end of November 2020.
– Complete and total secondary lock down (much stricter than the first and second rolling phase restrictions). Expected by end of December 2020 – early January 2021
– Reform and expansion of the unemployment program to be transitioned into the universal basic income program. Expected by Q1 2021.
– Projected COVID-19 mutation and/or co-infection with secondary virus (referred to as COVID-21) leading to a third wave with much higher mortality rate and higher rate of infection. Expected by February 2021.
– Daily new cases of COVID-21 hospitalizations and COVID-19 and COVID-21 related deaths will exceed medical care facilities capacity. Expected Q1 – Q2 2021.
– Enhanced lock down restrictions (referred to as Third Lock Down) will be implemented. Full travel restrictions will be imposed (including inter-province and inter-city). Expected Q2 2021.
– Transitioning of individuals into the universal basic income program. Expected mid Q2 2021.
– Projected supply chain break downs, inventory shortages, large economic instability. Expected late Q2 2021.
– Deployment of military personnel into major metropolitan areas as well as all major roadways to establish travel checkpoints. Restrict travel and movement. Provide logistical support to the area. Expected by Q3 2021.

Along with that provided road map the Strategic Planning committee was asked to design an effective way of transitioning Canadians to meet a unprecedented economic endeavor. One that would change the face of Canada and forever alter the lives of Canadians. What we were told was that in order to offset what was essentially an economic collapse on a international scale, that the federal government was going to offer Canadians a total debt relief. This is how it works: the federal government will offer to eliminate all personal debts (mortgages, loans, credit cards, etc) which all funding will be provided to Canada by the IMF under what will become known as the World Debt Reset program. In exchange for acceptance of this total debt forgiveness the individual would forfeit ownership of any and all property and assets forever. The individual would also have to agree to partake in the COVID-19 and COVID-21 vaccination schedule, which would provide the individual with unrestricted travel and unrestricted living even under a full lock down (through the use of photo identification referred to as Canada’s HealthPass) .

Committee members asked who would become the owner of the forfeited property and assets in that scenario and what would happen to lenders or financial institutions, we were simply told “the World Debt Reset program will handle all of the details”. Several committee members also questioned what would happen to individuals if they refused to participate in the World Debt Reset program, or the HealthPass, or the vaccination schedule, and the answer we got was very troubling. Essentially we were told it was our duty to make sure we came up with a plan to ensure that would never happen. We were told it was in the individuals best interest to participate. When several committee members pushed relentlessly to get an answer we were told that those who refused would first live under the lock down restrictions indefinitely. And that over a short period of time as more Canadians transitioned into the debt forgiveness program, the ones who refused to participate would be deemed a public safety risk and would be relocated into isolation facilities. Once in those facilities they would be given two options, participate in the debt forgiveness program and be released, or stay indefinitely in the isolation facility under the classification of a serious public health risk and have all their assets seized.

So as you can imagine after hearing all of this it turned into quite the heated discussion and escalated beyond anything I’ve ever witnessed before. In the end it was implied by the PMO that the whole agenda will move forward no matter who agrees with it or not. That it wont just be Canada but in fact all nations will have similar roadmaps and agendas. That we need to take advantage of the situations before us to promote change on a grander scale for the betterment of everyone. The members who were opposed and ones who brought up key issues that would arise from such a thing were completely ignored. Our opinions and concerns were ignored. We were simply told to just do it.

All I know is that I don’t like it and I think its going to place Canadians into a dark future.

Here are the original screenshots of the email (click to enlarge): 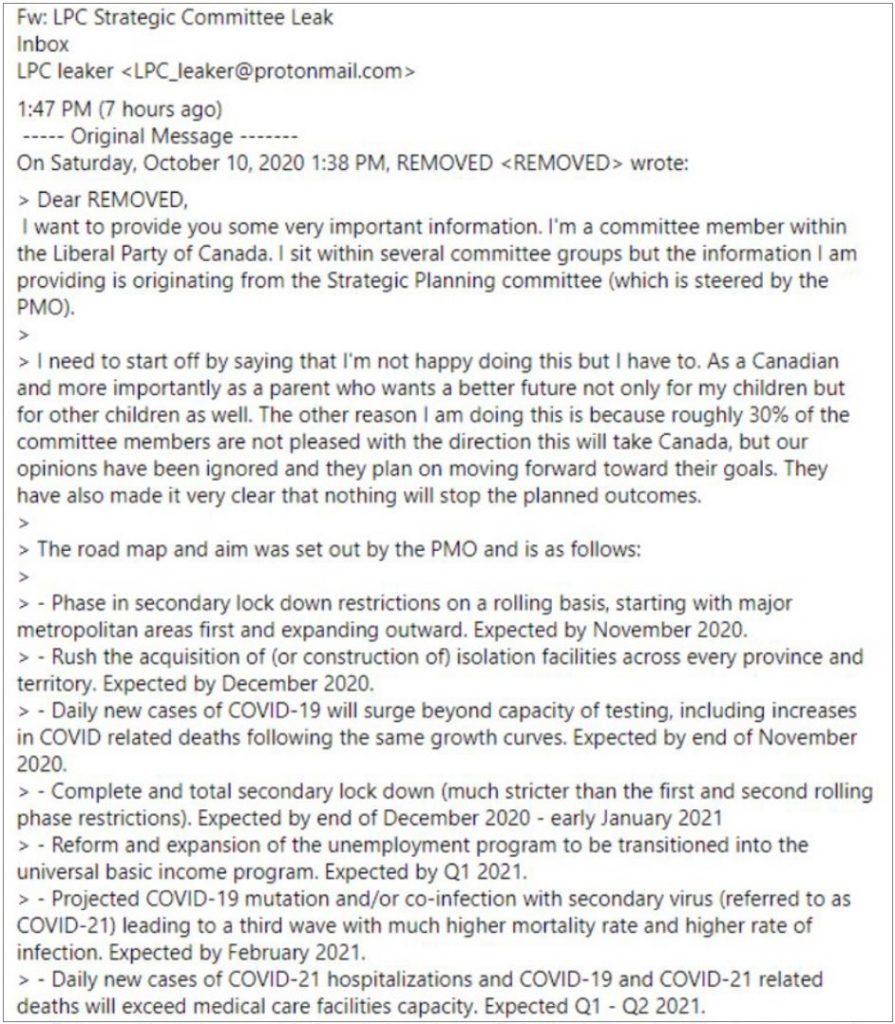 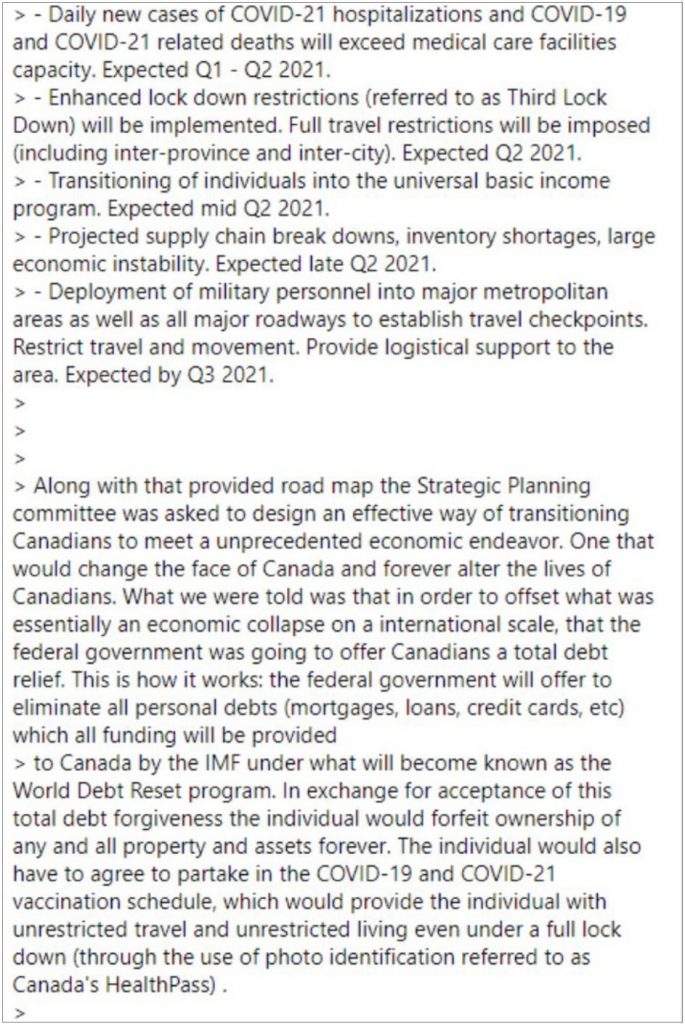 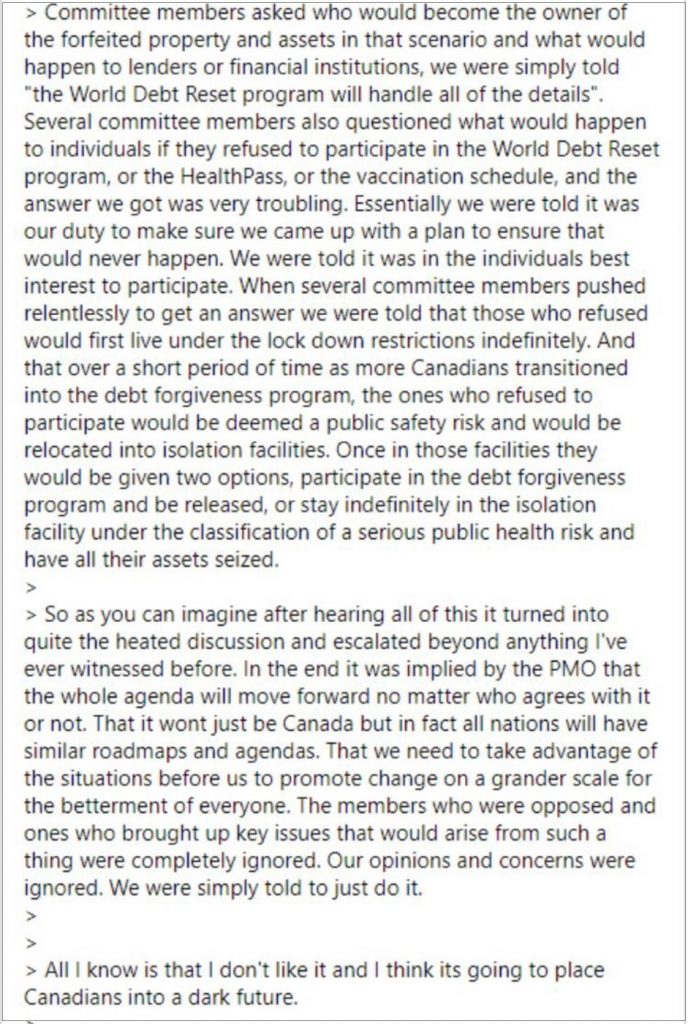 UPDATE: Apparently the phrase “Build Back Better” isn’t limited to only Canada. Its origins are said to have been started by the United Nations (see here) and even U.S. presumptive President-elect Joe Biden used the slogan during his 2020 election campaign –